Worst of the Worst

Another negative story on US Airways (out of Philly)....worse than my story, but a strong indicator of just how bad a airline they really are.  The emphasis of the story?  Passenger is basically insulted by gal at the desk before boarding....then takes a picture of her name tag to report her later.  The passenger boards the flight, then has the desk gal come up and demand that she delete the picture.  The passenger decides to comply to avoid issues.  Then the incompetent US Airways desk gal (Tonialla G is her tag name) goes to the pilot and labels the gal a security threat.  The pilot then orders the passenger off....and her husband accompanies her.

US Airways refuses to fly them any further.  Luckily, Southwest didn't go along with the label of a security threat and four hours later....flew the couple to Florida.

I started to dig into this company....US Airways, and it's interesting that they are noted as one of the most incompetent business organizations in the US (they actually make the top fifteen).  That takes a good bit of effort and I'm guessing with employees like Tonilla G....they work hard to stay incompetent.

My advice?  Stay off US Airways.  I'd go Trailways bus before riding this airline again.
at Tuesday, July 05, 2011 No comments:

Some Words on Amsterdam 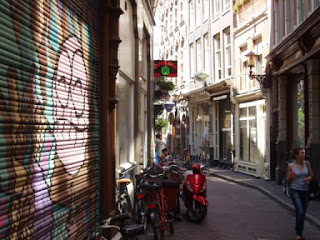 I spent most of my two weeks in Germany....but I spent four days in Amsterdam as well.

If a guy asked what makes the Netherlands a bit different from most places.....my response would be that it's like a place where they turned 10,000 engineers loose and just told them to "lego" the whole place into some engineer-fantasy land.

Bicycle lanes are everywhere and lead from one town to another.  Roads are made to perfection.  Trains run on time and surprise in the way that they are built (double-deckers).  Folks ride small scooters without helmets and do so with ease.  Streets interconnect and lead onto major roads.  Every building has some unusual appeal and you often wonder just how far folks are willing to go....to be different.

My advice on where to stay?  Never stay in Amsterdam itself.  I always end up in Leiden....about a 30-minute train ride from Amsterdam.  It's a university town and has enough unique character that you could spend the whole trip just walking around the town.  There is a Holiday Inn in the town, but there's a smaller 9-room hotel just five minutes walking from the train station which is more comfortable and cheaper.  What to eat in town?  Over twenty restaurants in the downtown area (five minutes walking from the Leiden train station).  Just two hundred feet from the station is a Dominos....if you have a powerful pizza urge.  Pubs?  There are literally dozens around town.  Crime in Leiden?  Other than a few drunk folks late at night....you just won't run into trouble at all, and everyone speaks English.

Walking in Amsterdam?  Well, you need to prepare for a bit of walking and bring the right shoes.  You can always buy a all-day ticket for the tram outside the city train station ($8 for a 24-hour period).  You can rent a scooter....which would probably take a year off your life because of the various thrills and dangers involved (forget the helmet).   The walking will end up tiring you out on a hot day and your thrills are finished by late afternoon.

Cafes?  Yes, with all that walking....you will have to spend a third of your day sipping on something and getting some liquids back into your system.

Getting lost?  If you hold the map in your hand....to be honest....you just can't get lost.  All the trams end up going back to the main train station eventually.

Weird people?  Yes.  There are tens of thousands of weird people that you might bump into.  Doped up crazies?  Yes.  But it's interesting that you don't have folks pulling out guns or knives or assaulting folks there.  Typically, you see some guy who blew his $20 in a smoke-house and is just sitting at a cafe and trying to get his bearings on where he is and how he got there.

Pocket money for a day.  A guy could get by on $60 a day, if you figure two meals and buying a big bottle of water at a grocery once in a while to hydrate himself (or pay $4 for a cafe tiny bottle of water to fix you up).  Eating?  Well, the Dutch don't make a big deal about this and you tend to find alot of steaks, hamburgers, and pizza.

Why you shouldn't be driving around?  The Dutch have this thing about speed cameras.  In Leiden alone....I'd be guessing there are over 300 cameras in the city.  Amsterdam?  I'd bet on 2,000 cameras around the town.  Even if you have the GPS turned on and warning you.....it's like every two minutes that another warning is coming up.  The train is safe and easier to grasp.

One last tip....if you are driving and using an old GPS with a Dutch down-loaded map from five years ago....you've got problems because the Dutch have this one serious bad habit....rebuild and re-engineer roads in a totally different pattern every couple of years.  Any paper map or GPS map over five years old....can be tossed.
at Tuesday, July 05, 2011 No comments: