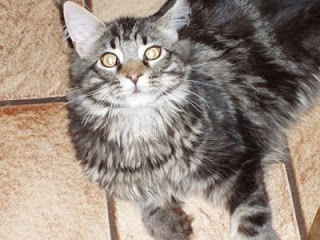 While on my vacation, I had a chance to be introduced to the new housecat...Mr Irum.

He's barely six months old and still classified as a kitten to some degree, but he's a Maine Coon and on the whopper size.

There are three odd things about this cat.

First, he does everything possible to never extend his claws on you.  You can offer up a snack to him and he'll grip you with his paws, but never extend a single claw.  It's almost like he was trained to bring no harm to a human.

Second, as the sun rises...around 5AM....this cat comes to visit you, and hunt your toes.  He is there to find them and nibble on them.  He never brings blood but it's like he is toying with you and making you get up.

Third, it would be best to describe this cat as the "Clydsdale" of cats.  Cats are supposed to be light-footed and prancing around.  Irum can't maneuver himself that way.....he runs and walks like a horse.

It won't make national news, and it will barely be page two news in most Bama newspapers....but our former Alabama Governor....Bob Riley....is today safe in a Sarasota, Florida hospital after a fairly significant motorcycle accident in Alaska.

The best we can say....he got all injured up on some road up north of Fairbanks.  He spent a week in the hospital up there with a couple of broke ribs, a broke collarbone and a collapsed lung.

There are several aspects to Bob Riley.  Shockingly enough, Bob didn't get tainted for any illegal corruption or deceit during his eight years as Bama governor.  If you drew up a list of the past fifteen governors...most all of them got into some trouble or drew some pretty negative attention.  Bob simply kept his pants on, avoided bribes, and never said anything really stupid.  Some folks felt Bob was four-star material for vice-president, and he still might be (2012).

Another aspect of Bob was his fascination with motorcycles and traveling the open highways.  We don't know his planned trip but I'd be guessing that he drove his across the US and probably did what every single Bama guy has often dreamed of....biking all the way to Alaska. 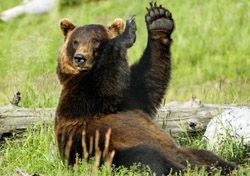 So we are left with a accident and how Bob screwed up.  Some reports indicate that he had gotten onto a dirt and gravel road...when a rainstorm had just come up.  He likely just hit a slick spot and then laid the bike down.  I would imagine that Bob will enhance the story (as most Bama guys would do), and mention a 800 pound grizzly bear had been waving at him from a distance, and Bob took his eyes off the road to do the Bama-acknowledged "nod", and wave back (breaking the rule of always having two hands on the bike).

Most Bama guys have never seen a bear wave....so it'd be a natural tendency for us to wave back without thinking about the wet road.
at Wednesday, July 06, 2011 No comments:

The Casey Anthony case?  Ended, with a twist.  If you watch HLN's news and bits over the past six months...it was a open and shut case, and easily guilty.  The problem is that a jury in 2011....is not a jury in 1972.  You would have had some common sense and personal questions to ask while in deliberation in 1972....and eventually came to a guilty conclusion.  I think between watching Matlock, CSI Miami, and forty hours of mind-numbing TV each week....the jury has reached the maximum level of doubt on everything spoken in a courtroom.  In today's environment....Sirhan Sirhan, Lee Harvey Oswald and Jack Ruby would all be declared innocent after a full and complete court case.  That says alot.

This DSK-case...the French dude banker in NY City who was accused by the hotel maid of sexual assault?  Well, after it comes to light that the hotel maid calls up some 2-star dope smuggler sitting in a jail about how to handle a good rich guy in serious legal trouble and the cops hear it via a taping system.  From that point on, the DA has a loser of a case.  The best we can say is that the French banker dude probably did have relations with the maid and had already settled on some cash amount....and in the end....she thought she could get a couple thousand out of the guy at the end of the event.  He apparently didn't want to pay and she moved to quickly involve the cops by the accusation.  The worse you can accuse the guy of?  He was married and having relations with NY City hotel maids....which you'd think his wife would care but that's not apparently the situation.  Curiously, I doubt if she ever knew his status in French politics (potentially the next President of France) or how something like this can unravel if you do something real stupid.

Just for the record....news reports out of California today say that the chief psychiatrist for California’s prison system made $838,706 in 2010....thus making him or her the highest paid state employee in the state.  It's a curious thing if you jump into this mess and look at the prescribed salary level for the job ($261k to $308k), and then realize that total compensation is raised by bonuses or getting paid for unused leave.  Kinda leaves a bad taste in your mouth.  Then the news reports indicate that at least ten more state employees for the state made over $500k each for the year.  It will likely be another thirty years before Bama has a single state employee making $500k a year (remember, we never count the two NCAA football coaches retained by the state to "entertain" us).

The Obama team is quick to react to stories of Joe Biden being dumped in July of next year's campaign episode....for NY City Governor Cuomo.  This replacement deal is supposed to be a surprise and you can't have this kind of story gaining traction a year away from the convention episode.  The selling point of Cuomo?  Folks will claim that he knows American business and Wall Street....thus bringing in a totally new prospective to the White House.  The fact that they didn't care for American business and Wall Street for the past four years....would just pass on by with the American voter apparently.

Finally....out in California (with budget and tax wars in full view)....the state lawmakers drew up this curious bill and passed it onto the governor today (he has yet to sign it though).  The bill basically requires the state school system to include a basic history of contributions of gays and lesbians in social studies.  You can imagine the board of education for each county getting this and trying to figure out how they will handle this.  Then you have to imagine each principal talking to all the social studies teachers in his school about how they will accomplish this.  Then you have to imagine each teacher sitting in a class and trying to get this critical and state-mandated information across to a bunch of punks who are mostly aiming to serve burgers, acquire $100k of debt by age 21, or leave the state immediately upon graduation.  Next on the list?  I'm guessing a state-mandated effort to tell the important history of midgets in American history and offer up the complete and utter history of wrestlers (like Hulk Hogan, Jesse Ventura, and Junk-Yard Dog).  Then, and only then....will students come to appreciate what all has been done.  Special note: because of the limited time and the increased emphasis on gay/lesbian history....the Civil War discussion will be limited to three days, and the impact of Rome upon world history will be limited to fifteen minutes of discussion.  Sadly, if a kid wants real American history....he'd best go home and just watch the History Channel (he might actually learn something valuable).
at Wednesday, July 06, 2011 No comments: