A Tax Upon Bullets?

There's an election race for mayor up in Maryland....which typically doesn't amount to much and wouldn't normally get national coverage.  Today....one of the candidates....Otis Rolley....stood up and said that he'd bring killing and control control into a fixed situation. He wants to toss up a $1 per bullet tax.

Naturally, this makes the local community leaders and pro-Democrat folks all happy.  They know there are a ton of bullets sold in Maryland, and they'd make some mighty fine tax revenue from this $1 a bullet.  And it ought to stop those evil folks from killing left and right.

I sat and pondered over this for five minutes....then kinda realized that if this were to happen....most Maryland folks would just ride over the state line and buy ammo from the good buddies in Virginia or Delaware.  So ammo by the ton....would just be bought out-of-state.  Course, Mayor Otis would brag about how his taxes brought ammo sales in the local town a screeching halt and made everyone feel briefly good.  Then a killing or two would occur.  Cops would catch the killers....ask them where they got their ammo....and then mention this in the press.

Mayor Otis, if he does get elected....is bound to serve a fairly short period....maybe four years by my estimate.  He might want to discuss another career opportunity.
at Wednesday, July 20, 2011 No comments:

Quote of the Day

Mo got invited for an interview with the Contessa gal from MSNBC.  She'd done a five-star dump yesterday on Rupert Murdoch and felt fairly frisky today....figuring she was fairly smart and dump on this dumbass Bama representative....was a bit of a Tea Party guy.

So she got him into an intense discussion for a couple of minutes about the debt ceiling and how not raising the debt ceiling....would lead or "revert" into a depression.  She figured Mo wasn't that bright to understand the significance of such matters of economics.....so after Mo said he disagreed with the kind lady.....she asked if he actually had a degree in economics.

Now....in the state of Bama.....to be honest....there are days and even weeks that you might walk around and never meet a guy with a degree in economics.  I'd even make an educated guess that my dad would say he has yet to meet such a guy within the borders of Bama.

But on this day with the MSNBC Contessa gal.....she figured wrong.

Mo actually did various years of study....graduating from Duke University in three years....with a double major in political science and economics....and he can proudly admit to anyone in MSNBC....he done fine with economics.....finishing with highest honors.  On top of that....he actually graduated in 1978 from the University of Alabama Law School.

Now, I'm not a bragging guy when it comes to smart folks from Bama.....but I would imagine that we've got about three hundred of these guys walking around the state with degrees in economics.  Some of them work in banks.  Some sell life insurance.  Some dabble in real estate.  Some raise cattle and haul hay.  My advice for any MSNBC dimwit who thinks they might pull a fast one on a Bama gal or guy.....you might want to ask a few questions before you start to dump the dumbass title on them.  Otherwise....you are the dumbass in the end.

Oh, and to be honest.....I'd imagine most Bama economic experts all agree.....the government has screwed up big-time.  But if I were you MSNBC folks.....I wouldn't engage on that question.
at Wednesday, July 20, 2011 No comments: 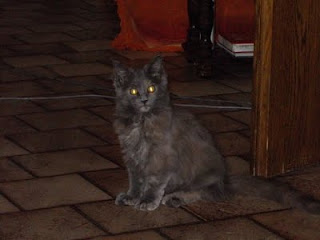 During my trip to Germany....I got introduced to housecat number two....Athena.  There are three unique features about this cat.

First, claws are extended on just about every single occasion.

Second, you know the term "lap-hugger"?  Well....this cat is a shoulder-hugger.  She wants to balance herself on your shoulder and just hang there looking at everything.

Third, you can pretty much set your watch to 4PM each day and this cat knows precisely when you ought to be feeding her.  She will lead you to the tray and let you know that deadlines are approaching.

Oh, and she also has this habit of getting up at 5AM and sitting on your chest or side....to see if you are awake like she is.
at Wednesday, July 20, 2011 No comments:

What Gets Lawyers Riled Up?

What gets lawyers really hyper?  People who lawyer in public but they aren't real lawyers.

Today, out in the midwest....the story came out about Tahir Malik who hails out of Stokie, Ill.  Basically, he got various charges put up against him for forgery and impersonation of a lawyer.  It is a curious episode.

For a number of months around the Stokie area....Tahir showed up at court proceedings and offered his expertise (at least 60 cases they think).  Tahir tended to make anywhere between $500 and $4500 for lawyer actions.  No one ever saw anything to suggest he wasn't a lawyer.....he knew precisely what papers to file and what to say to make judges happy.  In essence....he'd watched Perry Mason, Judge Judy, and real lawyers enough.....and read enough "how-to" books.....that he could pretend to be a lawyer.

The problem here is Tahir didn't ever get a lawyer's degree or pass the bar exam.  So they are likely to toss the book at him.

The curious thing is that a guy could break down most legal actions into a simple forty-page "how-to" book and accomplish things that you'd pay $80k for a bachelor's degree at some swanky university.  The bar exam?  There are idiots who attend six to eight years of university.....and never pass it.  There are likely idiots who can study forty pages of material and pass it without much effort.  Probably some smart kid with a week or two of studying....could pass most bar exams (I know lawyers will say otherwise....but it just isn't rocket science).

So they will stick Tahir off into some jail for at least a year.  If you asked me....he ought to take some classes and get a degree....and pass some bar exam.  Then he could actually be a lawyer.
at Wednesday, July 20, 2011 No comments: