How Much Money Was Really Spent?

So this is how government budgets work, and how money is spent or NOT spent.

Example one:  a government group requires landscaping services for a massive property in DC.  It's $44k per month and it's done by a contract.  There's a bid by folks, and the winner gets the contract for a year....$44k per month.  So they show up, landscape for four weeks, and the monthly book is closed.  Three weeks later, a bill is submitted.  About three weeks later....it shows up at the budget office of this government agency, who has forecasted the $44k a month and gotten it from congress already.

So for eight months....things run fine, and then the landscaping company fires Wanda who does bookkeeping. Her replacement (Hilda) walks in and it takes three months to figure out the bills.  She eventually submits the July bill for $41k (not $44k).  No one in the office notices.  The government group gets this bill two months later in their system.....and pays $41k.  After the new financial year starts up....the government budget lady figures out that they should owe $3k more to the landscaping company.  She sends them an email.

Eight months go by, and Hilda has been fired because of stupidity.  The replacement doesn't understand any of the things that Wanda and Hilda did.....so she starts fresh.  A year goes by and the boss doesn't even notice the $3k not there.  Two years go by.  The government lady, by law, has to maintain the $3k sitting there in obligated funds.....for five years.  At the conclusion of five years.....the money is non-existent.

Does the money go back to the government?  No.  It simply doesn't exist.  $3k disappears.

Example two.  A company is hired to provide nine employees to run a network at $1 million a month for the government.  Each month....the lady at the company submits a bill about four weeks after they close the monthly book.  There is a clause of two in this deal that if someone leaves from the nine employees....as long as they hire someone new within six weeks....they still get the $1 million a month.  If they miss that first threshold and it goes to seven weeks?  There's a $50k loss for that month.  If they go ten weeks?  Maybe a $150k loss.

So the company gal comes up to admit they were late hiring someone and $50k is deducted.  The government folks don't grasp all of this, and at the end of the year....$50k is sitting there.  Five years go by, and while they continually try to force the company to accept the $50k....the company never does this.

Should they fix this?  Oh, the budget folks would love to fix this but the law is the law.  Congress would have to mandate this is fixed.  No one really wants to do this.

So when your government says they need $800 million to run the Agriculture Department.  The truth is....there might be $4 million at the end of the year in this twilight zone.....that simply disappears into budget heaven....never to be spent, but the government thinks they spent it.
at Friday, July 22, 2011 No comments:

This week....one hundred and fifty years ago....a significant battle occurred locally here in Virigina....over at Manassas, Virginia....about twenty-five miles to the southwest of Arlington.  On the scale of things for American battles....it probably doesn't rate in the top ten....and it might even be pushed to between number fifteen and number twenty-five for battle importance.

The simple truth about the battle at Bull Run?  It was the first battle of the Civil War and ended in a shocker as the Confederacy kinda won the battle and set into motion a long period where no Union military leadership stood out.  If the Confederacy had come back quickly with two or three other battles like this in the weeks after Bull Run....the war might have ended very differently.

The other odd thing about this battle?  It was the first real "tourist-battle" where the rich, the elite, and political figures of Washington knew of the scheduled battle and all rode out in buggys or wagons, or on horseback to watch the battle.  They brought food, beverages and booze with them....as part of this "picnic".  In a comic sense....they then found that there were no safe areas and that troops from both sides questioned them to their purpose at the battle site.  One representative ended up being taken prisoner by the Confederacy and held for a number of months....simply for being at the battle site.

Finally, this week is a strange week for the Virginia area....as the temperatures rise up to around 100 degrees with humidity around fifty percent.  Frankly, it's hard for the million or so visitors expected all week in the Manassas area to take this heat and not suffer.  This brings things to an interesting discussion....what if the battle scene one hundred and fifty years ago had been in the same temperature range?  A guy can walk around all day with a rifle on his arm and likely engage the enemy with temperatures around 90 degrees....but at one hundred....he'd start to suffer.  I'm guessing if the battle had been at this rate.....another thousand men from both sides would have died from heat exhaustion.   Sadly, I'm guessing at least forty folks this week had to have medical attention as the temperatures climbed up toward one hundred.
at Friday, July 22, 2011 No comments:

The Curse of Being Jack 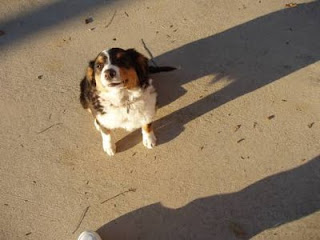 At some point around twenty years ago, my dad got this interest in Border Collies and Australian Shepard dogs.  The positive is that they turn out to be awful smart dogs and perfect for a farm atmosphere.  The negative is that they tended to get into a situation where their lifespan wasn't like a typical dog (too close to vehicles, messing around with the wrong critters, etc).  My dad typically named each one Jack.....they lasted around two to three years, and passed on.

Up until the last day or two.....the longest lasting Jack had gotten up around five years old and didn't have any bad habits.  You would have bet money on the dog lasting ten years.  Well....somewhere along the highway in the morning hours....this dog got hit.  So another Jack has come to an end.

This was the dog that preferred everything to stay the same.  You weren't supposed to move things around or change much of anything.  Squirrels weren't stationary and that bothered the dog.  If you walked off the footpath to the barn, then Jack would do figure-8's to bump your leg and try to get you back into the right position.  This dog adored cats, but the cats hated the herding obsession that the dog tried to force on them.  If twelve cows had to be moved from one field to another....then Jack reacted to the move like a chessboard and made each step a strategic maneuver....cows stayed within the game-plan or were given "notice".  This dog "owned" the passenger seat of the farm truck....literally, and sharing the seat just wasn't agreeable.  Everywhere you walked....this dog wanted to be within ten feet.

As much as it might grieve my dad.....I suspect that by the middle of August....he will  express an interest in getting another of the breed.  Jack number six (it might seven or eight, and I just lost count) will arrive and begin this new era.  If you ask me....there might be a curse on this name of "Jack" and maybe that spells doom from day one....as the adventurous Jack.  I'm not saying Karl or Rufus would be any better....but you can never tell about a curse.  The thing is that this dog will have mighty big paws to fill.
at Friday, July 22, 2011 No comments: 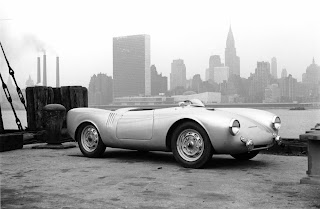 A long time ago...between 1953 and 1957....Porsche decided to make this oddball character of a car called the 550.  It was a two-seater and built originally with a 110 horse-power engine (you would think Porsche would have put a bigger engine on it but this delivered 7800 rpm).  It was an awful small car by the 1950s standards.  Today, it'd just be a pumped-up MX-5 Mazda on steroids

Today....without alot of talking....Porsche admits in public that they are discussing the reintroduction of the car.  They won't say much else.

The curious thing is the style and price.  Currently...the cheapest car that Porsche produces is the $71k Boxster.  They aren't exactly bringing in tons of cash like they were in the 1970s or 1980s.  They are owned by Volkswagen now and have been looking for a chance to pull themselves out of the pit.

My guess is that the 550 will be this "lesser" vehicle that we are currently used to with the name.....and revert back to the smaller 110 Hp engine.  If they were smart enough to build this in the Alabama plant and limit it to just five options....and settle the price around $25k, they just might get a huge boost on sales.

For those wondering why the 550 came to an abrupt end....it was the car that James Dean died in.  It was used for one thing in the late 1950s....racing.  You spent a ton of money in that time period for a small car that barely had 110 horsepower, but had the rpm to back up every ounce of power in the car.
at Friday, July 22, 2011 No comments: