Just a Parody of Real Life 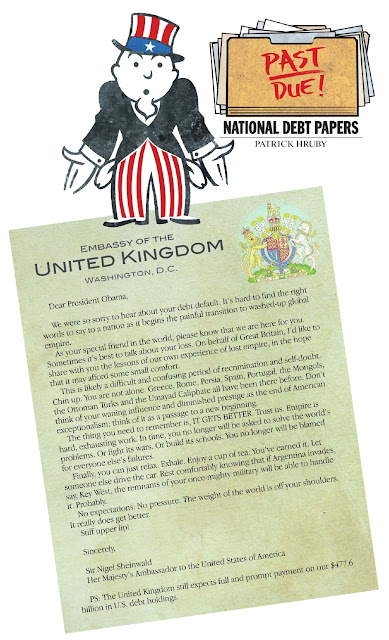 It is an interesting parody from the UK. Basically, the American empire is on it's last legs and our British friends wanted us to feel ok about this.  We of the US would simply fail our budget crisis, get second-rate bonds, and be a secondary nation from that point on.

I think the letter might actually be more true than parody.  I could see a fairly negative August going through....bond ratings dropped....budgets failing to fall into place....and more political chatter until Novembers election of next year.  The President would win his campaign, and we'd continue on down this trail for an additional four years.  The "empire" that we've known?  Well....the parody might be correct in that we just aren't much of a big-boy nation to talk or brag or lead much of anything.  Wendy's Burgers or Trailways Buses might be in better financial condition than the mighty United States of America.

It's sad in a way that things have come to this point.  But we all had our say in the matter, and allowed things to fall like this.

Meanwhile....being number two, or number five, or number eight in the world....might not be such a bad thing. Maybe CSP*N would start sharing out its operation with Honduras and we could get some dual time with Honduran political folks at our level (or their level....if you think about it).
at Saturday, July 30, 2011 No comments: