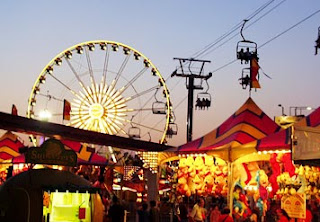 Over the past week at the Wisconsin State Fair....there's been some fights....some beatings....and some pretty upset folks.  No one much remembers anything like this before happening....so the locals and the cops are getting awful upset about the direction of things.

The basic story?  The locals say around 200-to-300 teenage black kids have been on some rampage.  Based on news reports....one might draw a conclusion of at least thirty black kids conducting themselves in a fashion requiring police reaction.  I have serious doubts over this 200-number.

So this morning....the State Fair committee who runs everything around the operation....dictated a couple of new rules to get them over the weekend:

“1. All youth under the age of eighteen (18) years of age are required to be accompanied by a legal guardian (age 21+) to be admitted to the Wisconsin State Fair after 5:00 p.m.

2. Anyone 18 years or over may be asked to show a valid driver’s license or state identification card for proof of age in order to be admitted to the Wisconsin State Fair without a parent or guardian after 5:00 p.m.

3. Any young adult under 18 without a valid driver’s license or state identification card and not accompanied by a parent or guardian will not be admitted after 5:00 p.m."

As a kid....I never got a chance to attend a state fair.  I always went to either the Lauderdale County fair or the Lawrenceberg fair in Tennessee.   My dad would drive us over....I'd get $5 and be turned loose.  Three hours later, you'd be at the meeting point....get one last corndog, and go home with sweat all over you.  No one sat around asking for a valid driver's license....you never worried about some whacked-out kids beating up on folks....and no one ever talked about a curfew.  So for me, this is a pretty tough list of rules.

Here's the thing....you really don't want a stigma attached to State Fairs.  If folks start thinking it's unsafe to attend a fair....they just plain won't attend.  State Fairs are cash-cows for thousands of people.  You've got an entire economy relying on good entertainment, fun, and a safe atmosphere for folks to walk around.  The minute you hint of some trouble....it's dissolving your profits.
at Saturday, August 06, 2011 No comments:

The Friday night down-grade of the bond rating?  Four weeks ago....you could easily have predicted this and the only question was when.  The comical thing is that strong rumors exist that the Treasury Department 'asked' S&P to delay this until the weekend. Speculation could swirl around why....either because the President had his events planned for the whole week and this would spoil them, or that a Friday-dump would help give big investors time to think about things before dumping their stock.  All in all....no surprises here.  The plan out of this mess?  That might end up being the biggest surprise in the end....with no plan, and just acceptance for the long-term.

Typically, banks don't charge folks for holding large amounts of money.  They appreciate that.  This week....Mellion Bank of New York (one of those banks that the big investors typically go to)....announced they'd charge for holding large amounts of money. The cause?  Well....everyone is dumping their investments and they want a place to park their money for the short-term....gaining even one percent interest off some savings account.  It was ok if we were talking about $500k here and there.  But the idea of $500M showing up today, and another $500M tomorrow....all expecting savings from the bank....just isn't logical.  So the bank is charging enough that if the guy expected savings....he'll get it, but he'll pay for it, so there's no real gain.

Cops down in Bama did some kind of operation called “Iron Snare.”  Basically, they sent out letters to parents declaring they had won tickets to the 2011 Iron Bowl game between Auburn and Alabama.  These were all parents who owed unpaid child support (around $270k).  To get these tickets.....they were told in the letter to bring the letter and photo ID.  Once inside, they we4re arrested.  I read through the whole thing....and frankly, I suspect that some lawyer will eventually stand up and represent each of these folks arrested.  The cops involved?  I think they are going to be sued for the tickets they promised (or the amount of money the tickets represent).  I might also speculate that both universities will be engaging a lawyer or two....to see if there was some state or federal law violated in promising non-existent tickets to their game.  These cops might pat themselves on the back....but it may not end up like they think.

South Korea is angry.  Apparently, those evil folks up in North Korea devised another plan which hits at the regular South Korean guy.  To make badly needed cash.....Kim Jong-il has unleashed this team of special (and young) hackers.  Their mission?  Get into South Korea’s online gaming sites....fight like hell....win various points and prizes....and covert them to cash.   Yes, finally....evil North Korean folks racing into World of Warcraft....carting off unicorns and pink ponies.....from the poor woeful South Korean players, and sell them on the world market.  So the North Koreans are carting off magic swords, pretty turtles, feathered wings, and just about anything that would sell to another idiot gamer somewhere in the world.  Frankly, it's a sad day when imaginary weapons are a big deal.....and some nation gets upset about their magic imaginary weapons being taken away from them.
at Saturday, August 06, 2011 No comments: