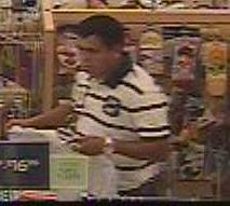 Here in my neighborhood....we've got this all-points bulletin out....searching for the butt-slasher.   Apparently, over the last year, this Latino-looking guy has come up behind a number of women in the DC and Virginia region....nudged them just a little....and moved on.  Later, these women have come to notice their seat of the pants are cut and on some occasions...they were bleeding a bit from the cut.

Cops have gone back and isolated the video and pictures at these stores....so there's actually this image floating around.

The comical side of this is that they've even established a task-force here in the region.....a couple of cops dedicated to looking for this guy.  The TV stations have cooperated and keep folks kind of updated on a daily basis.

You can imagine this guy sitting there now....having played out his game and had his amusement, and now wondering if his neighbors, his wife, or boss will see the pictures and note it looks like him.  Cops on your tail and potentially 100k locals are familiar with your crime.

Here's the sad thing....if and when you are caught....you get labeled the butt-slasher.  Jail time?  I'm guessing two to three years.  You go off to prison and eventually some of the guys there will learn your nickname.....the butt-slasher.  From that point on....your time in prison will go downhill.  It's a crime label that you'd be best to avoid.

Whatever amusement the guy thought he were going to get out of this.....just screwed up his life a bit.
at Saturday, August 13, 2011 No comments: