What You Can't Do

To make this kinda simple....some local church up in the Olympia area of Washington state....decided to have a combination baptism and barbecue...at a local state park.  The state management crowd....as soon as they figure out the baptismal part of this....jumped up and denied the church's request.  Some folks in the church wan to sue the state....some lawyers are willing to take the case entirely free just to prove a point....and some folks are wondering what idiot wrote a rule into state park management that says religion on state park grounds will not be tolerated.

I read through about six different versions of this story....because I kept thinking there'd be some real explanation to things...but there isn't.

In Bama....we tend not to mix baptismal and barbecues.  The minister jumps behind the stage area of the church where they've got the four-foot tub sitting there, and they douse folks as necessary.  We wouldn't dare have this down at the creek or lake because you might get bit by water moccasin snakes or get dragged off by the current.

Second, mixing barbecues with this business just isn't practical.  I can't think anybody ever mixing the two together.  There might be a picnic or some bring-your-own-dish deal....but not a barbecue.

There's probably a dozen Washington park managers sitting around this upcoming weekend....sipping beer....discussing how this mess all came about.  Someone will point out that marijuana is being grown on state park property.  Someone will point out that drug deals regularly happen on state park property.  Someone will even point out various unorganized sex parties that have occurred and folks just looked the other way.  And then they all wonder how baptismals got onto the forbidden list.
at Wednesday, August 17, 2011 No comments: 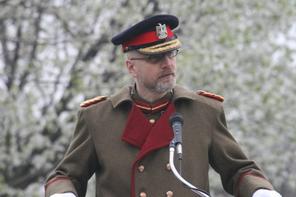 We had this unusual murder last weekend across the river, in DC....Viola Drath, who was a respected German journalist and professor at a local university was found dead.  Initial observations showed that she fell in her bathroom.....later, they came to realize that she'd be struck in some fashion.

There are a number of interesting aspects things in this episode.  First....this gal Viola....was 92 years old. Second, she was married to this German guy....Albrecht Muth, who is 47 years old.  Third, Albrecht had apparently been arrested for beating up on Viola  about five years ago....attacking her with a chair, banging her head against the floor and sitting on her.  Viola, being German....was a tough gal and likely came right back for more because the marriage continued on. Fourth, this marriage had run for about twenty years.  Finally, locals tended to have a laugh as Albrecht walked around the neighborhood on occasions in some German military fashion jacket and hat.  In essence, he was some oddball character in the neighborhood that they got used to and just accepted as "normal".  I'd be the first to admit that guys walking around in German military uniforms as their civilian attire....aren't exactly normal.

It's hard to say how the final results will be on this case.  If Albrecht was smart, he'd hire a fancy lawyer....pay off the Democratic party machine in DC with some cash, and confess that he's a bit crazy (showing up in court with the military uniform will help).  He might actually get off the hook.
at Wednesday, August 17, 2011 No comments:

The Legend of the Line

Occasionally, I have mentioned that I grew up in a dry county in Bama.  There are still around fifteen of these counties left in the state....each edging toward the abyss (falling into hell, obviously).  Folks will tell you that staying dry....prevents all kinds of problems.  You can be safe and secure.  You don't have families breaking apart (even though they are already breaking apart for other reasons).  You don't have money thrown away on booze (even though they'd toss it toward gambling, QVC-purchases, or lusty women).

This mentality has been around for decades.  I would imagine that a quarter of the population of my old county seriously believes in dryness.  The rest?  They've sipped whiskey and beer....and just grin when some guy makes a big deal about staying dry.

Folks are now talking about a petition and getting the wet/dry issue back on the ballot for next year's election.  It will likely be there, and it's believed that the county might finally go wet.  There might be towns that vote to stay on dry.....and some that vote to go wet.

What comes out of this issue....is the end of the legend....the county line.  There, as Bama meets Tennessee....this mythical land has existed for fifty or more years....where you'd drive across the state line and have a beer in the company of others.

The cops have come and gone.  They've run this nifty operation where they'd stop you on a Friday night and ticket you for booze in the car or too much alcohol.  The cop would have a percentage of the ticket for his bonus, and the local town got another piece of this money action.  Now?  The game could be coming to an end.

There will be this sentimental journey by some....remembering the state line....remembering the wise words of some guy half-drunk on Pabst.  Discussions on rotary engines would have occurred....guys sharing opinions on world politics....the stability of Peru....discussions over the forty ways to make catfish....interpreting Dan Rather before and after he was fired....analyzing the effects of peanut butter on mousetraps.....crying over the Dallas Cowboys yet again for a loser year....confessing to ladies at the bar that you'd like to date them but you still have a thing going on with the neighbor's wife, and perhaps shed a tear over the wife's criticism or the girl-friend finally leaving them.  When the world just didn't feel right....you went to the state line beer establishments, and had a few drinks.  You were drinking in sin, and always were noted by the Baptist minister back in God's dry county as being 'lost'.

So this may come crashing down.  You might be able to buy a case of beer in your own town....drive home and sit on the porch.....to drink as much as you want....on your own property.  It probably won't feel right because there's no company....no wise men....no hot lusty older women....and no threat of cop as you would have driven home.