There is a developing story in the Bethesda area from last night.  Cops on routine patrol....come up on a park area.  There's a red SUV at the end of the parking lot....which draws their suspicion.  They ask questions and then start to note a number of things in the back of the SUV.  They get the guy out, and then they find all of these home-made fireworks.  They then notice this odd contraption on the roof....like a turret.

Based on a few questions....this twenty-seven year old punk from Florida....Glen Neff.....had come to the DC region to fire off his home-made fireworks, in protest of the American banking system.  The turret was supposed to be this way of quickly firing and rearming....so it had tubes ready to deploy rockets.  He intended to drive around the national mall area (Washington Monument, Capital building, etc), and fire these at night.

So they've arrested the guy.  Charges?  I'm thinking there's at least a dozen charges lined up and he might actually have to spend three years as a minimum....in some prison.  But I also suspect that the drugs that the cops found in the vehicle will convince them that he ought to have a mental eval.  He might actually be spending a fair number of years in a supervised facility because of mental issues.

That's the thing about living around DC.  Every single morning brings this wave of odd events.  Who would have known that some doped up nut from Florida would drive all the way up....to fire off his personal fireworks.  The amusing thing?  Fifty guys will note this home-made turret and tube assembly that Glen attached to his SUV, and make way to Home Depot to buy all the pieces and parts to install a turret on their SUV, with tubes.  Some idiot will even make an assembly that you can buy via the internet and this will become the rage of thousands of guys.
at Tuesday, August 23, 2011 No comments: 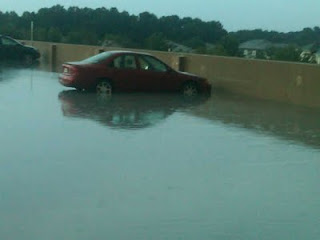 It won't make the national news....but it is a curious story.  If you live around the DC area and use Metro to get from the "burbs" into town....then you tend to park at Metro's parking garages (they charge for the parking).

So this past week, we had a couple of big thunderstorms.  As one guy came back after a long day at work....he came to discover that the upper parking deck didn't drain properly (probably never has in the twenty-odd years it's existed).   So enough water collected on the upper deck....to collect water inside the guy's car.  Damage-wise....I'd be thinking $1k of damages.

The guy is likely peeved but our friendly Metro guys will simply say it was an act of God and claim no responsibility.  A guy from Bama would examine the situation and wonder why no holes exist at various ends of the building for the water to just spill out.  But Bama guys aren't allowed to intervene in the acts of Metro stupidity.
at Tuesday, August 23, 2011 No comments: