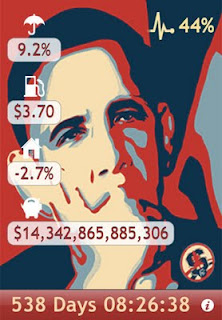 Some guys sit around and develop these applications for I-Phones.  The newest one?  It's a count-down application that concerns the President.  It's either counting toward his second inauguration or his final days as President.  Then it tosses in a updated rating on:

I sat and kinda laughed over this effort.  It could be a positive or a negative...depending on your view of the administration.  I would agree that the current numbers are fairly negative, but a year from now....a couple of them (like gas cost), might be fairly positive.

So a guy walks around with this....pulling it when he's over at the brother-in-law's house.....just to make a point.  Or he pulls it out in front of his aunt who voted for President in the last election but she can't ever explain why.  He might even show it to his 18-year old niece who is voting next year for the first time and hinting how bad things are.

In an electronic age....we've started sling electronic mud.  In my mind, I can imagine some kid working on a George Bush application that will announce how many days have passed since left office, and how bad things are since the last twelve months of Bush.  And another kid is building an application to show how Ron Paul's ideas might shift the numbers on unemployment or debt in a very positive direction, if only he was President.

There's a fascinating part of this hurricane episode that I sat and watched....MSNBC with former mayor Ray Nagin (New Orleans Katrina fame).....who actually sat through the hurricane then in a penthouse suite area throughout his famous hurricane.  They had the guy telling folks what they should do to prepare.  I just sat there and shook my head.  The most unprepared mayor of all time.....who was foolish enough to sit in a penthouse suite for a hurricane, and he's the qualified expert for MSNBC?

The AP finally stood up and announced they had the final poll necessary....most Republicans now admit, since Governor Rick Perry announced his intentions to run....that there's now an adequate number of Republican Presidential candidates running.  So the hint is.....for no one else to make any more announcements...(hint: Sarah Palin).  I tried to make sense what exactly this poll would show, but it's kind of beyond me.  It's like asking folks if toilet paper is now soft enough, and just getting some impression out of folks.....so we won't develop any more softer toilet paper (via our American toilet paper engineers).

Bama passed one of the toughest immigration laws in the nation back in June.  Naturally, it's currently being debated in front of various court situations.  But the act is set to be effective this upcoming Thursday.  It kind of came out this weekend that almost no state police organization or lawyers working for the state in this arena....have had any training on the wording of the law at all.  I tried to make sense out of this....a law that is barely five days away....and not a single bit of effort to read or learn the law becoming effective.  Course, this it Bama, and to be honest....there are still laws from the 1800s which the local cops and lawyers are still not familiar with.

Finally....several billionaires have stood up over the past month and just said that they would be willing to pay more taxes....to save America.  I've seen the interviews and read the text of their comments.  I've tried to make sense out of this....the folks who wined and dined political figures to get various tax credits written to fit their circumstance....now stand there and beg for more tax code that would force them to pay more.  Behind this....you'd have to suspect that they have lobbyists ready to write the tax credits necessary....as soon as the idiot politicians put more taxes on them.  It's the behavior of insane rich people.  They really need their money taken away....because they'd prefer the US government to use it to hand out to Peru, Ecuador, or Bolovia....in support of some research project to prove that South American beer is just as good as North American beer, or to study the migration habits of deer in the Andes.
at Sunday, August 28, 2011 No comments: