The Truth About Cars 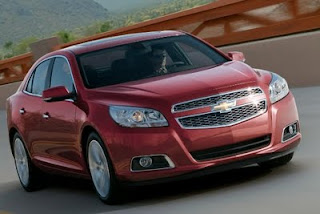 If you read through the Wall Street Journal today, there was an interesting article over the 2013 Chevy Malibu being projected.  The government, if you didn't know it, has this forced goal of 40 miles per gallon within the next fifteen years being the norm.  Naturally, you'd mostly shake your head and think it's impossible, but this 2013 Malibu is making the steps toward that.

So they listed the various things done....like E-Assist which gives the car this little boost of extra power during acceleration, without taking extra fuel.

The rear end?  Redesigned to give more airflow.  The grill?  Redesigned to open or close air flow to the engine to allow air to cool the engine only when necessary.  The underbody?  Redesigned....again to allow more improved airflow under the car.  Same way for the front corners of the car.  More aluminum?  Yes.  No spare tire?  Yep....got to yank out that thirty pounds to give that car less weight to carry....you end up with a "inflate-kit" to get you by.

I sat and pondered on this.  This is the first big step to really start bringing the car toward the government's goals.  But you can and imagine this.   By 2025....almost all of your car exterior will be either fiberglass or light aluminum.  The undercarriage will be the only thing made out of actual steel.  The engine?  I doubt that you will be able to even buy an engine bigger than 2.0.   An almost flat car?  Yep.....it'll be designed for dynamic airflow....maybe six feet longer than cars today and roof won't be more than four feet off the ground.

Protection during accidents?  We will eventually reach a point where the amount of fiberglass equals the amount of aluminum on the car.  And at that point....with deaths soaring left and right....some idiots will ask if we weren't better off with old-fashioned steel cars.  And the politicians will begin to grin....and this whole gas mileage game falls apart.
at Tuesday, August 30, 2011 No comments:

There is an interesting science report out of Australia today.  Basically....the rate of mental illnesses today is related to increased depression and post-traumatic stress....triggered by climate change (global warming, global cooling, climate change, etc).  The science doing this report were real careful about the full list which increases stress...which include a higher rate of substance abuse (legal and illegal).  Then they put the numbers out there....one in five folks are suffering ''emotional injury, stress and despair.''

Toward the end of the report....they wanted everyone to imagine fifty years in the future....that a vast number of the population would be "crazy" (my words, not theirs).

I sat and pondered over this.  Personally, I'd put the current crazy level in the US at one out of twelve....that ought to be on medication or under treatment.  So I'm guessing there are lots more crazy folks in Australia than the US....but this might be due to the amount of beer that the typical Australian drinks in a single day.

We are plainly damned at this point.  It's too late to shift climate change around.  The world is now bound and determined to be full of crazy folks....mostly on medication.  Kind of a zombie-land, if you ask me.  The curious thing is that folks have been doing increased drug (legal and illegal) since the 1960s.  So this global cooling, global warming, or climate change business must have been going on in the 1950s to start this mess.

The curious thing which I ponder upon....is how me and most of the folks I hang out with....have avoided climate change.  We don't do the drugs.  Are we missing out on climate change?  Are we simply blinded to the changing weather pattern?  I don't know.

For some reason, as I read through this story, I had this image of the movie....Mad Max.  A bunch of crazy Australian folks...driving around the desert in fast cars or trucks.  I'm thinking these scientists simply got doped upon some drugs.....watched Mad Max around twenty times over a weekend, and then simply wrote some imaginary science report.

The blunt truth is that weather tends to change all the time.  So folks.....don't get upset or disturbed by it.  Ask your neighbor how it was in 1962 and he might reassure you that weather comes and goes.  And if it really bothers you....skip the drugs and just drink a six-pack of Pabst-Blue Ribbon.  It's better for you in the end.  And don't watch Mad Max over and over, or you might get some funny ideas.
at Tuesday, August 30, 2011 No comments: