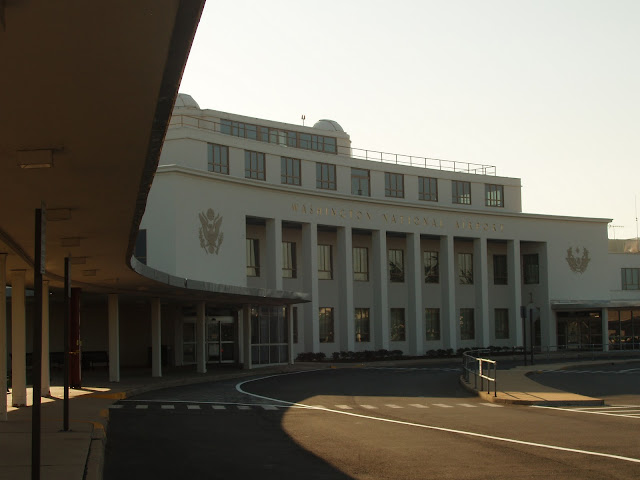 It's official title?  Ronald Reagan Washington National Airport.  It is a mouthful.  Decades ago, this was all DC property, and then some deal was cooked up where both Arlington and Alexandria both got swapped over to Virginia.  The Washington name stuck to it though....even though it's really Arlington property.

The interesting thing about this airport is that it's a phase one and phase two airport.  Phase one is the picture above and looks like something out of the 1960s, with real architectural appeal.  It's what you'd like to see when you get to an airport.  Today, this part of the facility is left to handle a couple of the smaller airlines like Air Canada.  This is where guys want to install the new Ronald Reagan statue.  It's supposed to be up within six weeks.

The phase two of the airport is about 300 feet away and looks like your typical medium sized town airport, with sixty-odd gates.

If you showed this picture to most folks around the area....they'd have to take a minute or two to think about it because most have never been to this part of the airport.

So if you ever take a notion to travel up to DC and have a couple of hours open....go over and view the airport (the older part).  It's at the bottom of the "J" and all within ten minutes walking from the METRO station.
at Sunday, October 09, 2011 No comments: 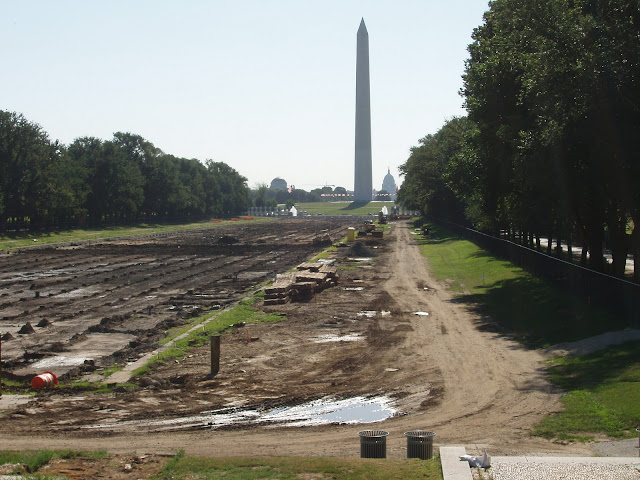 If you make down to the Washington Mall area this year.....you get a chance to see the lake drained and heavy renovation underway.  It's something that only happens about every hundred years.
at Sunday, October 09, 2011 No comments:

Late today (Saturday afternoon)....we had an unusual episode over in DC....at one of the Smithsonian museums (the Air And Space building).  This is the structure, that resides about 500 feet down from the capital building....next to the American Indian Museum.

From our eager bunch of anti-Wall Street folks....who camping out in northwest DC.....there is one oddball group among them.....that is against the war (in both Afghanistan and Iraq).  To be kind of honest.....there are likely twenty-five or more different oddball groups, which make up the anti-Wall Street crowd currently.  Some are environmentalists.....some are pro-immigration....some are anti-bank....some are just plain communists without much extra on their list other than being commie.

This anti-war group heard that the Air and Space folks were having a drone showing.....which naturally can only be pro-war.  So they marched....roughly three to four miles....and arrived around 3PM at the Air and Space building.  Witnesses tend say that it was a max of twenty people....most all carrying signs...and kind of vocal.

What the protest folks wanted to do....which was kind of outside of the anti-Wall Street focus....was run up against the drone exhibit.  They wanted entry, with their signs. The guards at the Air and Space joint were accommodating, which is a surprise of sorts....but you just can't bring signs within the building.  For some oddball reason, this ticked off some folks at the front of the group and they started shoving the guard.

Now, there are four places in DC where you don't intimidate any guards.  The White House, the capital building, any memorial, and any of the dozen-odd Smithsonian structures.  The minute that shoving became apparent.....the guard pulled the pepper spray and focused on the first two or three folks.  All total.....about a dozen folks got a bit of pepper in their eyes....one pretty severe.  One tourist got a shot of the spray by accident.

Most of the video showed some confusion among the anti-war guys.  They weren't used to pepper spray.  The Smithsonian decided at that point to shut down the building....kick out all tourists....and hope for a better day on Sunday.

The thing about this tactic here.....is that thousands of people come to DC daily.....and some are on their very first, and possibly last trip ever to the city.  They have a list of things that they'd really like to see.  So they are on a schedule.  Some come from as far away as Bombay, or Moscow, or Tokyo.  By picking a Smithsonian structure....you really harm the image of the city, and make some innocent folks kind of disgruntled over your tactics.

So tonight....there some anti-war dudes back at the base camp site in northwest DC.....grumbling over the "attack"....which is always declared as "unprovoked"....and the anti-Wall Street folks are trying to make these anti-war guys understand that they all need to be focused on the evil Wall Street business.  They all pass around some marijuana....sip some Pabst.....and by 1AM....they've all fallen into a deep sleep.  Tomorrow?  They will awaken to their fourth day without a bath, and maybe start thinking of heading back to the dorm, dad's basement, or the sister's trailer in Kentucky.  And, they will still have their slight scent of pepper spray in their nose.