We had an odd knifing here in DC last night.  Some dude was on the bus going to Wheaton....and got kinda frisky with himself (in a manly fashion)....while sitting in the rear of the bus.  Some folks noticed his "action", and finally got the bus driver's attention.  Some lady got involved....confirming....and they finally got to Wheaton where she was telling the "handy" guy that this wasn't acceptable on the bus (especially around midnight).  The driver finally got involved, and then the "handy" guy ended up knifing the bus driver.....not seriously, but enough to earn a trip to the hospital.  Naturally, the cops got involved, and this "handy" guy will end up with serious charges and at least a year or two in prison.  If you had to pick something to go off to prison for.....this just isn't in the top one hundred crimes worth the effort.

News came out this afternoon of the Iranian plan to kill the Saudi ambassador and bomb the Israel embassy.  The curious thing....is that they've been holding the dude accused of the planning part of the deal....for two weeks.  Why announce the plot today?  That's the funny thing....the attorney general is mostly standing there and grinning....and you have to suspect that the fourteen day wait didn't really have much to do with plot.  Course, maybe the President owed something to the Iranian guys and figured to wait to the right day.  But it's all kinda curious and something out of a fine four-star movie plot staring Harrison Ford and Christopher Walken (my choice for VP character).

The judge in charge of the "Underwear bomber" case in Detroit....came out today and said it was ok to put pictures of the genitals of the bomber himself.  You can imagine the dude sitting there and there's these color pictures....probably 2 foot by 3 foot....of your genitals made up, and will be presented as evidence to the jury.  For most guys, this is the lowest point of your life.....color glossy photos of your manliness on public display.  You can also imagine nine ladies in this jury....all taking an interest in the color photo, and whispering between each other over the size or shape of things.  Frankly, this part of the master plan was never explained in detail, and I'm thinking he might have done a double-take on matters before accepting the job.

The Japanese have this idea to help put travel by tourists to Japan back into order.  They have lost vast numbers on the tourist trade.  So they want to give away 10k seats free of charge.  Yep....10k seats.  The catch?  You have to be a person with personality and a blog.  They want you to talk up about the wonderful countryside.  I pondered over this.  Surely my blog is read amongst a dozen-odd Japanese characters each year, and maybe they might accidentally put my name on the list of folks to give a free ticket to.  The problem is....it'll appear like some stupid spam-mail, and I won't take it serious.  I'll just delete this funny email from some Japanese hostess gal.  When would this start?  April of 2012 would the earliest that the "game" would start.  I'm guessing they will review various things....and eventually pick the 10k.  To be kind of honest here.....if you asked me to name thirty things that I know about Japan.....I probably wouldn't get past fifteen facts.  My number one fact is that Godzilla always saves Japan when some weird sea creature from a nuclear experiment shows up on the shores.  Course, I've never been able to figure out where Godzilla came from or why he's the friendly monster.

Finally, the best Republican guy for Democrats to walk in and vote for during the primary?  Mitt Romney.  There's no doubt that five million Democrats will participate in the primary on the Republican side.  Mitt is likely the oddball winner of this whole deal.  Mitt can't win in the south, and he won't charge up the independent voter group.  So you end up in September with Mitt talking alot....with Bachmann as the VP.  It's a guaranteed lose-thirty state plan for the Democrats.
at Tuesday, October 11, 2011 No comments: 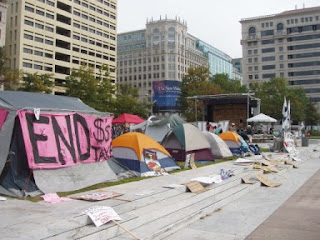 I went downtown today....to view the DC "protest Wall Street" movement.  Basically, they took up residence at the Freedom Plaza, which is a block away from the White House.  Strangely enough....for this weekend, it was also the spectacular food fest for the district....which closed down the whole street by Freedom Plaza.

I did the reconnaissance of the area, and quickly added up the numbers.  There was probably twenty-five tents, and at noon....there were probably 150 protesters in the local area.  Strangely enough, that's the same number of homeless guys within a block of this event.  The parks folks did the most to lessen the impact...shutting off their fancy fountain next to Freedom Plaza. 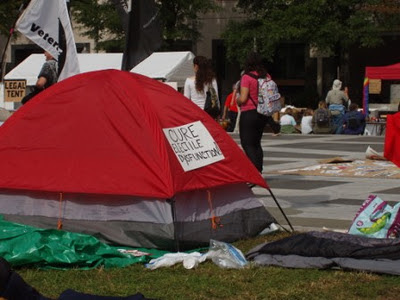 The best sign of the day?  Off one of the protest tents...."cure erectile dis-function".

All in all, it was your typical long weekend assortment of crazy characters who didn't have much to do, and just decided to tramp off to Washington and hang out with some other lefty liberal guys.  I  thought there would be more interaction, more attempts to convert people visiting....but that just wasn't in the gameplan.

The biggest negative?  Well.....it was as clean as you make a place like this but then I came across some human crap left on the ground. 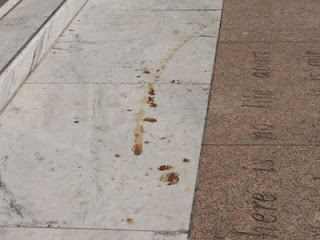 I stood there looking at this.  The homeless probably left stuff like this.  I don't think I'd blame the protest crowd.

The media?  Well....I counted three different networks trying to squeeze something out of this.  There was a Latino channel which did a broad picture and avoided interviewing anyone....mostly because there wasn't anyone much in charge at the time.  One of the local TV stations had a fancy-pants protester and were interviewing them.  I'm guessing they had a reservation and time set up for this interview.

After three hours of walking around....I walked off.  I had bigger expectations.  It was the first protest rally that I'd been to.....other than Tea Party activities.  This one didn't really come up to a three-star status.....at least from what I could see.

Folks from over with the food fest?  I think ninety-eight percent of them just walked around the protest area and weren't interested in even viewing the plaza area.

So I walked over to the White House....viewed the tourists, and then walked back to the METRO station.  At least I got out and walked around....saw some weird folks, some homeless folks, and had some kind of funny meat on a stick.  That's the best you can do in DC.
at Tuesday, October 11, 2011 No comments: