My brother alerted me on the festive Friday that he had in the office.....Halloween-theme.....a number of folks wore costumes to work.  My brother has vowed that next year....he will participate but it's a difficult episode.  The problem is....he is an engineer.  So there has to be a great deal of thinking, calculating, and analysis done over this.  Added to this issue....like me....he grew up on the farm, and a kid's vast vision of costume in Bama.....is kinda limited to what K-Mart might offer.  So there is a problem here.

I sat and pondered over this....and in three brief minutes....it finally hit me, and I made the recommendation to him.  A Mennonite suit, with a twist. 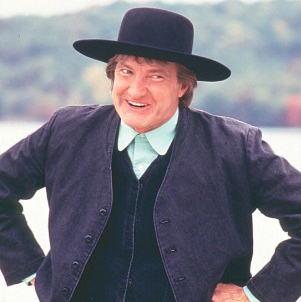 First, there is the costume (really the suit).  You get the typical Amish-like hat....toss in a $49 cheapo jacket two sizes too large for you.....and find a decent pair of older farmer boots (preferably black, in fact, it can only be black).  You need a vest, and a plain cotton white shirt.

The twist?  Most Mennonites will tell you that technology....even coffee makers and blenders.....are evil and they can't cross the 1888 borderline.  So my suggestion Mennonite version 2.0.

Then you get around to TV, and admit the 1997 season of Seinfeld was probably the peak of all comedy TV.  Toss in NYPD Blue, Touched by an Angel, and X-Files, and you've got a pretty good case.

So part of the act for the day is your sales job of Mennonite version 2.0.  Maybe some homemade bread with fresh honey.  There's a old-fashioned milk container that you brought in, marked "fresh spring water". You lay out some Amish lilac lotion on the desk for any other engineer folks with dry skin.  Put some rock "shatter" candy on the side of the desk....from honest-to-God Amish or Mennonites.

Finishing touches?  A short stubby pencil in use when someone asks for a signature during the day.  An intense discussion on programming language from the 1980s during lunch with the guys.  You flirt with the younger engineer gals by talking up the art of homemade muffins or pie.

By the end of the day....you may have converted a dozen folks over to this new lifestyle idea....for your Halloween effort.  The key thing....don't get carried away and start thinking this was all a pretty good idea.  Bring yourself back down to reality and chill a bit after work with a Pabst or two.
at Sunday, October 30, 2011 No comments:

The Ten Absolutes of Washington

After almost twenty-one months of living in DC....I've come to realize some absolutes in life, which don't make sense anywhere else in the world, but make perfect sense here in DC.

1.  Washington is the only place in America where you can be elected to office as Mayor or City Council....hand out jobs left and right to cousins, relatives or special friends at $100k or more salaries.....ask for four-wheel-drive SUVs.....and when finally discovered for corruption....never spend a day in jail....ever.  With the exception of former Mayor Berry, no DC political figure ever goes to jail.  If Mayor Berry hadn't been caught on camera with feds.....he would have walked away.

2.  DC has a sports franchise for just about every single sport now.  The curious thing is that each arena or field....has private viewing facilities for the rich VIP club-house guys.  These are sold or rented at huge rates and make the sports club profitable.  Who pays the huge sums of money?  Mostly lobbyists, who sit and invite senators, congressmen, and government VIPs to enjoy a fantastic sports moment....with free food and free booze.

4.  On any given day in the winter....if a sudden shift in snow occurs....there's the potential to lock-down escaping traffic in DC for eight hours.  People will actually climb out of their car after three or four hours and just start walking home.....only to find their car towed away the next day when they return.

6.  DC is one of the few places left in America where a "kid" is defined as someone under the age of 21.  If you do really serious stuff and you are nineteen years old....the odds are that you will be stamped as a "ward of the state"....sit in some youth home for two years....and then be released back into public sector. Chief reason for this definition?  The locals are happy that Johnny Junior didn't get jail-time.  And if the locals are happy....they vote for you the city council dude again and again.  Makes perfect sense.

7.  There is a certain balance to cop placement in DC.  The rich folks of DC live mostly all on the western side of the District.  So naturally, there are more cops in that region, than anywhere else.  The federal cops protect the central part where the President and tourists mostly hang out. And the eastern side?  Well....they get what resources are left.

8.  Real estate in DC is flipping....in a funny way.  Rich yuppies are buying run-down houses....renovating them....and then turning entire neighborhoods into upscale.  The old locals?  Quietly, they are being pushed out.  In twenty years....most every neighborhood will be upscale.....which might shock everyone who lives in DC today.

9.  The teachers that DC tried to fire from three years ago?  They were all required by the court system to be rehired.  The reason why a hundred-plus teachers were fired?  They were absolutely noted as incompetent and in a few cases....a threat to the students.  So they are back.  As much as people would like to fix education in DC.....it's anchored down pretty well.  If you are kid in the system....tough luck.