Our Little Political Fiasco in DC

Once upon a time....2010, to be precise....we had this run-up to the Mayor's election in the District of Columbia.

There were three Democratic contenders.  We had Mayor "X" who been in office for four years and avoided any political scandels and corruption.  He was young, and liked by the majority of folks in the western side of DC (the Georgetown crowd).  Candidate two was city councilman "Y", who was a older gentleman and generally liked on the eastern side of the District.  And down the line....along side all of the zero-players running as a potential candidate....was challenger "Z".  Challenger "Z's" job was to be a pain and blunt-instrument on the Mayor "X".

As the primary came to a close.....city councilman "Y" ended up winning....with a seven-to-eight point spread.  The truth was that Mayor "X" did great with the Georgetown crowd, but didn't really captivate the more more "black" communities of DC.  To also be honest.....challenger "Z" really hammered into Mayor "X's" reputation and made folks question the pay-back that political figures are supposed to offer various neighborhoods.

City council "Y" wins....and is sworn into office.  Days later, challenger "Z" gets offered a 6-figure job with the new Mayor.  Challenger "Z" is awful happy about his situation.  Who would have dreamed of such fortune?

Days passed.  Some folks suddenly realize that Challenger "Z" is totally unqualified for his new job, and has a criminal record.  New Mayor "Y" jumps up.....has a quick investigation, and determines that Challenger "Z" can't work for him in the new government.

Challenger "Z" is insulted.  Days pass.  He now pulls out money orders that show that the election team of Mayor "Y" actually did pay him.  He wants the feds to investigate the corruption factor.

The media starts to quiet down over this whole mess.  It's obvious that several people around Mayor "Y" are hiring up not just this guy, but relatives and personal friends.

Days pass, and challenger "Z" now produces talking points to show that his purpose in life....was strictly to be the bad guy and continually screw with the old mayor.  His efforts?  No one can speak clearly about this....but you have to imagine a five-point effort here that came into play....costing voters from the older mayor and going to the city councilman.

Congress did an check-out of this mess, and it appears that they do agree on the money-orders but nothing else is substantial enough to point at.  Charges?  Well...it's not against the law for one idiot political figure to contribute funds from his campaign to another candidate.  And it's not against the law to give talking points to any idiot....media or candidates included.

So here we are.....almost a year into this four-year mess.  The new mayor looks like an idiot.  The challenger is a goofball who should have never been allowed to run.  The media looks awful dim because they refuse to investigate anything.  And the public is simply shaking their head over the creativity of the players involved in DC politics.

End of the Line (Tourmobile) 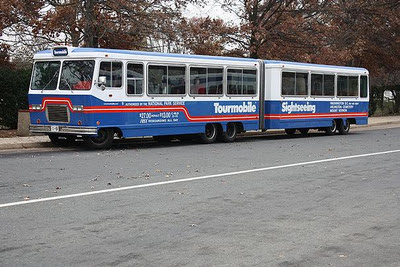 This is the final day of the DC Tourmobile.  For those of you over the past forty-two years who came up to see the capital and paid the all-day ticket....you got to see jump on and jump off as you toured the city.

The folks who run Tourmobile basically admit that it just cost too much to run the buses around town.  They charged $32 a person for an all-day ticket, and were at the marginal point of profit.  They needed to charge $40 to get ahead and get new buses down the line, and that wasn't going to happen with the current economic picture of the District.

The problem is that they had 300 employees and they had offer not only wages that met the local situation....but the benefits as well.

There are five or six other localized bus groups that haul folks around....some better....some worse.  Tourmobile was the legendary group.  They were started by the Universal Studios in the beginning, and I doubt that they ever imagined that it'd be as successful as it was.  I also imagine that the owners had the tour company up for sale for at least five years, and simply couldn't find anyone to buy the tour company.

The curious thing is that Tourmobile had a pretty in-depth relationship with the National Park Service, and Arlington Cemetery (they actually ran the bus around half the cemetery).  The National Park Service crowd say that they are reviewing options but no one is sure about replacing the service or the future look.

The interesting thing about this service is that they saved folks hours and hours of walking.  If you've ever been to DC in the summer, with temperatures in the mid-90s.....you know how miserable a trip to DC can be.  So it was a great service, and it is a sad end.
at Monday, October 31, 2011 No comments: