It's Just the Way It Is: The District

I'm a statistics person.  I added up the numbers today.  From 1960 to 2010.....roughly 12,000 people were killed in Washington DC.  That's the population of Muscle Shoals, Bama.  So imagine that every single resident of Muscle Shoals were shot, knifed, or beaten to death today.  It's a number that you really don't want to sit and imagine.  Over a fifty year period....12,000 folks were dispatched to heaven or hell before their appointed time.

You can't find a major city in Europe that matches up to these numbers....or in Japan, or South Korea.

For aggravated assault?  It's over 200,000 folks over the same fifty-year period.

The District is an amazing place.  Their tax base is built on the fantastic wealth, the continual spending habits, and the property values of folks who live on the west side of the District.  I would suspect that well over eighty percent of the tax revenue bucket that the District has to spend....comes from the west side.

So when the Mayor and the thirteen council members meet (there are only eight districts in the "District", but they decided they needed a chief, and four at-large council members...which makes perfect sense)....they have this shopping list.

The west side folks have two things that they care about....security and decent streets.  They want their money back that they had to pay for income taxes and property taxes.  So the big guys shake up their money pot and out comes great streets and a vast amount of police protection for the west side.  The assault and murder numbers are minor when compared to the east side.

At this point, you draw up a map of yearly murders and assaults....and realize that the vast number are on the eastern side of the District.  Cop protection on the west side achieves results.  We don't talk much about what cops achieve on the east side.

The east side folks?  They have several things that matter.  First, they want alot of education funds, which get used to help hire relatives and friends of people from the east side.  Schools offer an abundance of various extra administrators and "helpers".

The east side folks want community programs....which help to slide cash from one project to another (one was a job training facility which was supposed to help transsexuals....but the renovated building ended up being used for a lusty nightclub after the renovation job).  Other community programs also fund up sports programs for youths on the east side.....with funds that go into various pots....and a quarter of it likely just disappears into an amazing pit, which has nothing to do with kids.

The east side folks want jobs for the city government.....that pay well.

So at the end of the trail.....when the east side folks finally come around and discuss more cops....there's no money left.  So they are happy with the things they acquired, and they will simply make due with the number of murders each year.

Some might read my blog from DC and think I don't have a clear answer for this mess.  I do.  It's rather simple.  A couple of decades ago....Alexandra and Arlington were part of DC, and things were revoked....and they were released back to Virginia.  Shocking?  If you asked the old guys in the District....they know this.  Most of the younger folks don't know anything about this local history.

So I will suggest this.  Carve over Georgetown and the west side of the District, and give it back to Maryland.  Let the rich elitist of the west side leave.

Once the Georgetown crowd leaves....the vast bucket of tax revenue is gone.  The District suddenly has to survive off a third of what they make now.  My guess is that the school system would bust in just four months and a vast number of school employees would have to be released.  The hundreds of extra city employees with no real function in life?  They'd have to be carved off as well.

The feds might come in with an offer for funding three thousand cops for five years, and start to demand active jail sentences for any kid over the age of seventeen (something you can't currently achieve in DC) that commits a crime involving violence.

The odds of this Georgetown leaving?  Zero.  If the rich on the west side started asking for hundreds of other projects.....they'd get what they want simply because the city council is hostage to the tax revenue bucket.  You can't afford to let a west side guy be unhappy.  They might just walk off.

So when you come to visit DC for the national memorials and such....enjoy what you see, and leave by nightfall to return back to Virginia.  Don't worry....the Commonwealth is a bit different and you won't become a statistic that I tend to study.
at Thursday, November 03, 2011 No comments:

Email ThisBlogThis!Share to TwitterShare to FacebookShare to Pinterest
Labels: district of columbia 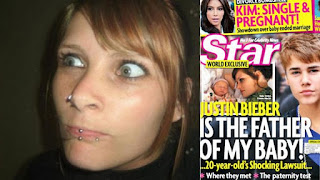 Justin Bieber and the "mother".  I surveyed the story today.  I don't really care much for Bieber and wouldn't recognize him if my life depended on it.  Here's the thing....some unemployed gal with various facial piercings comes up and claims that she has this 30-second moment of lust with Justin at some concert, got pregnant, and wants him to own up to being the father.  The story has this funny ring about it.

So, this is what happens at concerts, if you do sit in the first couple of rows...like this gal.  There's lots of dope being passed around....the good stuff....and by the conclusion of any concert these days....you've pretty much lost control of yourself.  So you get invited up to the backstage after the concert, while all doped up.  The Bieber kid comes up....chats with you....you start talking a bunch of garbage and turning sideways....and Bieber skips over to the next group that they brought back stage.  She turns back around and this Bieber-helper is standing there.  She recognizes him as Justin....while all doped up, and just keeps talking.

The Bieber-helper decides to invite her to the trailer, and she is thinking she's got the real Bieber.  For nine months....she keeps thinking about her love that night....the Bieber (really the Bieber-helper).  She delivers the kid, and now wants cash for Bieber-Junior.  The DNA test will be eventually ordered, and I honestly believe that she will be standing there in total shock that it doesn't match up.  For several brief days....she was the woman who had Bieber's kid, and now?  Just an unemployed gal from San Diego who'd like to find a husband to handle her nutty behavior and enjoys Bieber music.

The Greek mess.  If you watched any news over the last two days....it's all leading off with some Greek mess.  The TV guys waste precious time talking to wannabe journalists and pretender think-tank guys, and just leaving you with no clear script for this episode "Greece on a Roll" (my title).  This is the deal....the Greek found these idiots in the EU who would bank them for some cash but the Greeks have to give up some fantastic deals in life, and accept mostly misery for the next ten years (maybe longer).  No political figure in Greece has any backbone to sign on the line.  So the dimwits felt that a national vote would fix everything.  In the midst of this talk of a national vote....they suddenly came to realize that if "no" was the majority answer in the vote....then they'd have to dump the Euro....go back to the Drachma....and live a pretty dismal life.  It's a five-star lose versus a five-star lose situation.  The only difference is that you can claim a EU status if you just vote "for" the deal.

Herman Cain and lusty stuff.  The sad truth is that it's very likely that over 10k women every year are paid some "cash" for sexual harassment.  I can't prove my numbers, but I'll challenge anyone to prove I'm wrong on this.  Government organizations, businesses, churches, and charities are all participating in cleaning up a mess or a non-mess.  Some of these might very well be true.  Some are totally bogus.  The clear position for every HR department these days is a checklist.  They try to establish a truth or near-truth.  At some point, they have to pay someone and offer an apology.  Life goes on.  HR folks tend to want these ended quickly and they know that between $10k and $50k tend to fix any deal up.  So they'd typically rather pay....than sit around and make this into a court-case....owing $200k to a bunch of lawyers.  It's simple.  Herman might be totally innocent, but HR likely didn't care....they just wanted a conclusion.  If you asked them how much they paid out over a decade....they'd just grin.

Beer and the Postal Service

This is what we know.  The US Postal Service is in dire straits....and will fail unless the House of Representatives comes around to resolve various issues.  Some Senators have gotten into the "fix-it" business by suggesting that one of the great changes that could be done....is to allow post office folks to deliver wine and beer (Senator Joe Lieberman is the guy pushing this).

Postal folks can deliver just about anything....within weight restrictions....from lusty magazines from France, to cheap smokes from Indian reservations that we'd best not mention here.  But wine and beer haven't been on the authorized list before.....ever.

One of the top reasons for refusing wine and beer shipments was always that postal folks took great pleasure in smashing in boxes and containers.  They'd show up at 4AM to unload the tractor trailer rigs at the big post office in the region and immediately pick out any box that said "fragile" and drop it two times, and kick it once.  It's debated if this was done because of the various frustrations that postal folks suffered or just because they had excess energy at these early morning hours.  Later, as the delivery guy took the "fragile" box out on the route....they'd typically drop the box off the back of the truck at least once....to ensure their frustrations were exercised.

What is the threat now with this idea?  If you live in a dry county in Bama.....the postal folks may unknowingly deliver your beer.  For Baptists who were living a pure life in a dry county within Bama....this is an absolute threat.  I would imagine this Sunday....various ministers will be talking of the coming mess, the involvement of the devil in postal operations, and a change of life that is unacceptable.

On the other hand.....a thousand guys sitting in dry counties across Bama....are looking closely at beers from as far away as Mexico, and how they can finally have it delivered to their mailbox.  These folks will be getting to know their postal delivery guy up close and personal.  Relationships will develop and maybe the postal folks will gain a lot more respect.  Maybe.