There is a report out of the San Francisco Gate (from the folks at the Chronicle)....that LA cops used a dozen-odd undercover guys to check on and spy over the Occupy LA camps before the raid this week. The report suggests that this spy effort went on for several weeks and that it was simply to learn of the Occupy intentions...nothing more. The undercover cops weren't supposed to sleep over at the camp...just blend in and listen to the chit-chat.

This would likely make a great Hollywood script.  LA cop "Joe" meets up with some dimwitted divorcee from Portland, and falls in love with the gal.  Undercover cop "Karl" meets up with some yoga Marxist guy who stays mostly doped up and gives great advice on home repairs while spouting off some Marxist quotes. "Joe", the undercover guy who is six months away from retirement....meets up with a Vegan gal who owns a honey business in Idaho and decides to marry her but he can't admit his work over the past forty years....so he keeps telling her that he was some American Sandinista guru on the run for the whole time.

You have to imagine this crew of twelve guys.  They dress up in funky clothing at the locker-room at the station.....then get dropped off blocks away.  They walk around for six hours....mostly drinking coffee and eating donuts.  They listen to some dimwits talk about the bad economy, who often blame Bush, and wonder about the $88k they owe on college loans.  Then the cops return to the station....report everything they heard...mostly all crap.  The bosses at the station are just sitting there and wondering why the Occupy guys won't go out and get a job.  And the Mayor is sitting in a pit of worries....if the Occupy guys ever figure out the spies are in the camp....he'll never be able to stand up in front of Democrats ever again.

It's a five star movie...if ever made.  And of course, I'd want Clint Eastwood as one of the undercover cops.  You can even imagine his talk with the 21-year old kid...."Listen punk.....you work and pay taxes like everyone else.  Don't get any funny ideas about playing Karl Marx and lounging in Dad's basement the rest of your life.  Clean your ass up, put on some decent clothing, comb your hair, and grow up.  If you want to be some commie....go to Cuba or North Korea".
at Saturday, December 03, 2011 No comments: 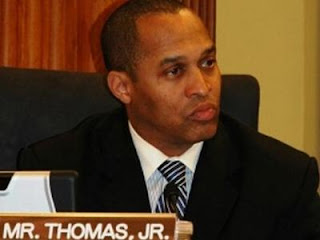 From across river, in DC....this is what we know....both the FBI and the IRS came to the home of DC city council member Harry Thomas Jr.  Months ago, it came out that Harry arranged for a charity to be created in his name, and then turned around to ask the city council to dump money into that charity (city tax revenue money), and they complied.  Then Harry took $300k in funds to pay for some personal items (an Audi SUV, vacations, assorted items, etc).

Eventually, someone figured this out.  My general guess is that some other members of the city council over the past twenty years....have done the same thing and gotten away with it.  Harry was just unlucky, in my humble opinion.

So the agents searched his house in DC for a number of hours on Friday.  They took boxes of documents and computer hardware.  Then they brought in a tow truck to his personal motorcycle, and his Chevy Tahoe.  Harry's lawyer came over, and spent most of the day watching them....which I imagine that he'll charge Harry several hundred bucks for this "make-me-feel-better service".

Once Harry got caught in the scheme, he eventually came around and agreed to pay the city back.  It would appear (based on several media reports), that he has yet to admit any guilt on the issue.  In public, he generally comments that it's an ongoing investigation and we will eventually arrive at the truth.

There are a couple of observations here.  First, the IRS is involved because Harry used the charity money in some illegal fashion and he should have paid taxes on the money that he used for personal use.  While true in that he is paying back the money to the city.....that's his money going to the city.  The original bucket of cash.....will be be determined in some fashion to be taxable.  So there's likely another $100k that Harry will have to dig up somewhere, on top of the $300k he's paying the city.....for federal taxes, along with fees.

Second, it kind of amazes me that the feds only come to his house....several months after the fact.  Harry should have been bright enough to shred every piece of evidence in his house, by the end of the first week when this whole story came out.  If they get anything out of this search....it'll because Harry wasn't bright enough to clean up his own mess.

Third, after this mess came up....Harry ended up dumping this Audi SUV real quick.  It was like a bad tattoo....which you couldn't show in public.   So he bought the Chevy Tahoe.  I'm guessing that he used the Audi as a trade-in....so the IRS will want to confiscate that as part of the deal.  He probably won't get Tahoe back.  Somewhere in the government sales business...in about twelve months (after the court case)....this Tahoe will be sold at a public auction.  With low mileage of driving around DC.....this might be a pretty good deal, if you just knew where the sale was to be held.

Fourth and final....other members of the city council, plus former members....are likely sitting there in some pain right now.  They probably have some issues in their closet....fake charity operations, bogus expense accounts, etc.  If the feds dig into Harry and find connections back to them.....then this starts to get real messy.

I would imagine that Harry is sitting there and wondering how this whole thing will play out.  Just invoking the IRS....has cost him another $100k in taxes, plus another $30k in lawyer bills.  He needs that city council position to last out another five years....just to pay back these bills.  This corruption game can really add up.
at Saturday, December 03, 2011 No comments: