Against the Law Now 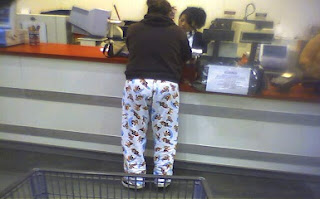 This week....some folks down in Louisiana discussed the idea of a law against folks appearing in public....in pajamas.

The parish?  Caddo....Shreveport territory.  Having been stationed in the local area before....I can say this for the locals.  They tend to be fairly nice, courteous, and give folks an ample amount of space....yet be a bit on the conservative side.

Based on commentary, you can tell that some folks have been talking to the county commission members, and it's a major topic.  So they discussed it, and voted 8-3 to ban public wear of pajamas.

The general feeling in that area is that you could be just about anywhere....Piggly Wiggly, 7-11, some gas station, or even a bar-b-q shack, and there would be someone in pajamas.  In a public setting....it just doesn't work.

On the other side of this....one commissioner voted against it because he felt the government can't solve the problem.  Course, you could say the same thing about cutting the budget, taxes, consumption of alcohol, crime, murder, meth, or packs of wild dogs in your community.  The government probably can't solve any of those problems either.

My gut feeling is that someone will want to test the system now and get arrested in pajamas.  No one has mentioned the fine, but I'd take a guess of it being near $100.  Some fancy-pants lawyer will take the case, and fight this off to the Supreme Court.  All nine of the Supremes will privately say that this is the most stupid case they ever took on, and yet....they will have to take it into consideration.

For you folks who have to parade around at Piggly Wiggly in pajamas....my humble words are simple.  You look like you just fell out of bed, and accidentally forgot to change clothing.  Even jogging pants would look better.  I know you can buy a fancy pair of pajamas at the Dollar General store for $7, but it's meant for home use.  I would be agreeable if you mowed your grass in pajamas....as long as you stayed on your private property.  But don't go public at the Dixie Queen, or Mandy's Muffler Shop with pajamas.

The sad thing here....is that political folks actually had to waste time on this topic.  Heck, they could have outlawed dogs riding in the back of a truck.