The Sincerity of a Tear or Two 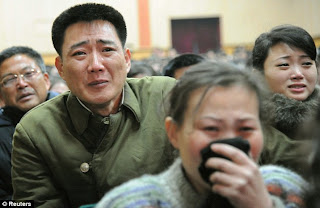 There are stories out of Asia this weekend that North Korea has gone onto a new type disciplinary situation.  A number of folks complained that their co-workers, neighbors, or associates just weren't showing sincere sadness or despair upon the death of their beloved dicator....Kim Jong Il.

So, there is evidence that the government is handing there labor-training camp sentences to folks who are accused of such a 'crime'.

Sadly, for a stoic type character (John Wayne, Gary Cooper, etc).....who'd just raise a whiskey glass and utter some Irish death poem....with just a faint tear in one eye....that wouldn't have been enough.  You needed to act emotional so that people felt you were convincing in your grief.

I sat and watched around three minutes on the German news with women throwing themselves down on the ground, and men holding each other while they wept tears for the camera crew.

The sad thing is that if you are sentenced here....then you get sent off for six months of training, enjoy a three-quarter rationed meal each day, and have to memorize all these Communist sayings to make folks think you are a serious Communist.  I'm also guessing that you need to weep a good bit and pretend you really are grieving....six months after his death....over the dictator dying.

The sad thing here is that there are twenty-four million folks in North Korea.  To be kinda honest....less than 10k have ever personally met and shaken the 'fragile' hand of Kim Jong Il.  Maybe another six million have seen him at parades.  The vast majority (my humble opinion) probably never met the guy except for pictures at the manager's office at the pig farm, the public school they attended until age 15, or at the local village doctor's office where some color picture was hung.  I'd even be guessing that less than forty people really knew Kim Jong Il in a personal way....and they might have been the only folks who really did shed sincere tears.

Kind of a sad way to end the final chapter on the life of Kim Jong Il.....if you didn't weep enough....you get sent off to some prison-camp.  Most North Koreans would have been in utter shock over what transpired with Princess Di's death and funeral....if they'd witnessed that whole episode.  Those were all real tears....and nobody had to suggest a prison-camp deal for the fakers.
at Saturday, January 14, 2012 No comments:

Not that I really care, but about four years ago....the Larry King Show on CNN started to dwindle in numbers.  I hadn't watched Larry King for at least eight years, so I didn't care.  About a year ago....CNN finally hinted to Larry that he ought to retire, and he did.  So here came this British guy, Piers Morgan.  I watched twenty minutes of his show one night....and then I gave up on him.  The CNN numbers for Pier's show?  Almost at the same level that Larry King had when he stepped down.  A full year, and no advancement on the spiraling numbers.  This week, Piers came out and said the second year would be different.  He was going to have more fun and actually be more opinionated, thus bringing on fantastic new viewers in 2012.  My humble opinion is that Piers can linger at the dismal side of viewership for the rest of this year and maybe next....because there's no one ready to step in and fix their problems.  If he thinks being heavily opinionated helps....go for it.  Larry King was never that type of guy and it's the kind of act that would turn off most folks.

This credit ratings episode in Europe on Friday?  Well....it carved up a number of countries and made them all appear weaker.  Naturally, it was done late in the day....so the Euro rate wasn't affected yet by it.  Come Monday....The Euro rate will likely go up several cents to the dollar.  We are slowly edging the Euro from it expensive point of 62 Euros to 100 Dollars (2008 rate), to where it stands today, 76 Euros to 100 Dollars.  My humble guess is that in a month or two....it's going to be near 82 Euros to 100 Dollars.  The truth is that most European countries are only a step behind the US in dismal economics.  Greece may be six steps ahead of the US, and California by itself might be a step ahead of the US as a whole.....but life goes on.  A bunch of fancy analysts will waste time on Monday explaining why France is screwed up, and 40k Americans will wonder where France is.....while asking Johnny Junior to find it for them on the map.

There is this publication called Education Week.....which naturally speaks out on education.   They came out this week and assessed states and the nation.  Bama ended up with a "C", while the US itself ended up with a "C-minus".  The factors in such an assessment?  Well....somehow they measure the chance of success, which is odd factor and kind of debatable in Bama.  Then they measured K-12 achievements, testing, the teaching profession and school finance.  If Bama paid teachers more and spent billions on school infrastructure....they might have gotten a "A-minus", although this is all some game with words and the factors.  This all brings us back to "chance of success".  I went to school with folks who ended up as truck drivers, gas station managers, and farmers.  Frankly, they don't give a damn about success.....it's more about happiness in life, and most are fairly happy living in the town where they grew up, making $30k a year, driving a 12-year old Ford F-150, watching high school football on a Friday night, and helping their cousin Claude dig up a septic tank.  I would probably give Education Week a "F-plus" (if there was such a grade), because they may have written up qualifying rules that really don't mean much....later in life.  The sad thing is that some idiot will appear in the Montgomery legislature and quote Education Week like it was some piece out of the Bible, and then beg them to tax the state more so that teachers would have bigger salaries, and thus move up to a "B-plus" on Education Week's listing.

The local paper (the Examiner) did up an article on DC's local government.....involved in a dramatic roadtrip to talk up statehood for the District.  The plan by the city council?  Travel in 2012 to all fifty states.

You can imagine this boondoggle episode by the mayor and his buddies on the city council.  They travel into your state.....sit down with a couple of Democrats at some capital luncheon.  They talk up how they'd like to be a state, and everybody hugs each other.  They might get the Channel Nine news team from Salt Lake City to interview the mayor....with folks in Salt Lake wondering why some idiot would travel to Salt Lake City to talk about some impossible dream over becoming an actual state.

The way that they talk this traveling business....each member will pay his own costs from his $19k office supply budget.  The curious thing is that if you don't spend the money at the end of the year....it drops back into the general fund bucket.

So it's a curious story.  A dozen odd political players from DC.....trying to travel cheaply around America.  Their little speech is mostly bogus and not worth listening to.  The folks from the state they are visiting....they try to be friendly, but there just isn't much interest in giving two senators to some area that's the size of Austin or Huntsville.  So they sip booze and talk up the choice of lusty ladies, then go sit in the hotel bar for four hours before leaving at 5AM to meet the $99 cheapo flight back to DC.

My suggestion?  Take the cash and rent one Greyhound bus.  Then get yourself a "Juan" driver, $800 of cheap beer, and just run around the country in three weeks.  Try to sleep at the Motel Six for the most part....share rooms....and buy cheapo Captain Hook fish meals.  After you get back.....talk big about the ten thousand folks you met....including a bunch of folks at welcome centers across the nation, and how everyone felt Washington DC ought to be a state.

Sorry, but I can't make this kind of stuff up......a bunch of guys just taking city money to travel around and meet other idiot political folks and lusty women.  Man, it just doesn't get better than this in DC.
at Saturday, January 14, 2012 No comments: