The BP oil guys finally came to a conclusion over all the lawsuits for the oil mess in the Gulf.  The pay-out?  $7.8 billion.

By the time that the lawyers and the thousands of folks get to the conclusion of the pay-off.....I doubt if any single fisherman gets what they really thought they deserved.  They will sit there in shock.....having thought back in 2011 that they'd get treated right for their bankruptcy episode.  It just won't be that way.

Who gets money from the pot?  Cleanup folks, fishermen, just everyone who claimed damage or sickness, hotels, pubs and bars along the Gulf, and local town councils.

By the end of 2013, I would imagine that lawyers will take roughly forty percent of the money....because of the man-hours they put into this.  Most folks will laugh over check for $1k and wonder what idiot made the decision that this was all they'd get.

For BP?  Their stock will rebound by next week, and everyone will be very happy over the settled sum.
at Saturday, March 03, 2012 No comments:

Based on comments made today in the press.....a minimum of five US army guys will get a disciplinary review after this stupid burnt Qur'an episode in Afghanistan. This recommendation, coming from both a senior Afghan military and US military review.....doesn't really solve much, because it's mostly a recommendation.  The review did admit by the end....none of this was intentional.

So you can imagine this scenario.  It's a layered screw-up. Some intelligence guys find coded messages in Qur'ans being handed around the prison. They confiscate the documents, and hand them to some superior officer. The officer reviews the case, and likely assigns his chief of staff the task of getting rid of the problem.

This chief of staff probably puts them into a box and sits on the issue for months, and then his replacement gets the box. The replacement guy probably doesn't know anything, and just assigns Private Snuffy the job of burning the items (just like the fashion that we'd dispose of an old US flag). By the time you come to the end....it's probably six to ten folks who had some part in this whole thing. Sadly, there's probably not a single Army regulation that clearly says what to do with coded Qur'ans.

So you come to two problems.  First....this disciplinary review.  I would have problems in believing you can find any Army officer who would give out paperwork to any GI.....without some direct violation of a written regulation.  In this case.....I have my doubts such a regulation exists.  So the joke is.....the idiots will issue a bogus disciplinary document to some kid.  The kid will hand it to a judicial review panel, and toss it out six months later....admitting they can't find any violation of the regulations.  Everyone pats themselves on the back....because the whole bogus situation is now fixed.

The second problem is more difficult.  What do you do with those future coded Qur'ans that turn up?  My advice?  Pack all these code Qur'ans up and ship them to the nuclear storage pit out in Nevada, and just let them sit 10k years until they dissolve. It's best way to get rid of nuclear waste and coded Qur'ans.  We can pay some guy named Larry to truck them from Washington DC.....after some four-star generals bless them as nuke waste-like material.  Larry would have a security convey to escort him....ensuring no Qur'ans are actually dropped on interstates, or stolen by any stupid idiots along the interstate system.  Eventually, Larry would deliver them to the pit, and they'd be sealed in 55-gallon barrels, taken as far down as possible, and sat by some nuke material.

The sad part about this whole mess?  The coded messages written?  They probably had Super Bowl picks announced by the various guys in the prison, and it was the only way to communicate their picks to other members of the prison.  The truth is....you just don't know what the coded messages ever said.  All you know.....is Private Snuffy burned some Qur'ans, and he got caught.  Sadly, he'll return to Iuka, Mississippi one day, and tell momma why he got into trouble, and everyone in the family will talk badly about the US Army for the next hundred years.

This week turned into a media circus of sorts....once a Georgetown law student got into the contrception mess by appearing in front of Congress and discussing the painful financial woes of birth control pills for college gals.

By the middle of the week, Rush Limbaugh rushed into the mess.....tossing the word "slut" onto the female Georgetown college student.  Then yesterday, a number of media folks and political folks (mostly Democrats) rushed up to say that "slut" was a highly offensive term and very inappropriate to utter.  At one point, even the Georgetown University chancellor rushed in....to say this term of "slut" was a terrible misrepresentation of ladies at his university.

I sat and pondered over this.  It's sad in a way that a university chancellor has to stand up and defend young ladies at his university from being called "sluts".  Personally, I can't think of any professor, in the history of the United States, who ever got called in to utter his defense of "sluts".  We've had chancellors say regrets for riots, corruption, raising tuition, unsportsman-like behavior, hazing, and bad professors....but this is the first time for commenting on "sluts".

The truth here (my humble numbers)?  If you use typical average numbers for colleges like Mississippi State, Texas Tech, and Florida State....then your slut-average on campus is likely to be less than five percent of the female population.  Sure, you might run out to UCLA or Nevada State, and run up against a ten percent statistic, but that's rare.  Georgetown?  This is a $59k a year tuition, book and dorm fee situation.....so when you come to a place like this.....there aren't many folks fooling around or wasting their time.  I admit, there are more ladies to men at Georgetown (roughly 55 percent to 45 percent), and out of 3200-odd ladies there....there might be forty-four sluts at best.

Tonight, I'm guessing forty-four sluts from Georgetown University will mingle at some bar, discuss their situation, and hostility over a number of non-sluts being tossed into their category.  You don't want slut-wannabes or pretender sluts walking around and claiming your status....it just ain't right.  Eventually, Rush will travel to Georgetown, and say his regrets to the forty-four gals.....in that he never wanted to put non-sluts into their category.  They'll all share a beer....give Rush a Georgetown University "Sluts" t-shirt, and the story will quietly disappear the very next day. 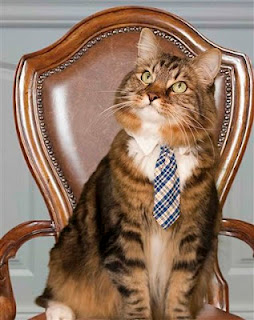 You can tell when things have hit a peak and folks are burned out on politics.  Here in Virginia, we have a cat named Hank (actually a Maine Coon), who has been openly discussed as a candidate for Senator.  The owner has been careful not to sign any papers, and obviously, this will have to be a write-in or paw-in situation.

I believe most everyone is tired of politics from both sides of the aisle, and that Hank might be the right guy to send over and represent the state.  In fact....if it was just two human senators and 98 cats......we might all be better off.

Hank's top topics?  He's for free cat chow and would vote to seize cat food production plants in America.  Hank also believes in sixteen hours of sleep for people, which means you'd be limited to four hours of actual real work, and a twenty-hour work-week.  And Hank would like to create a zone of protection around the Senate, against dogs.