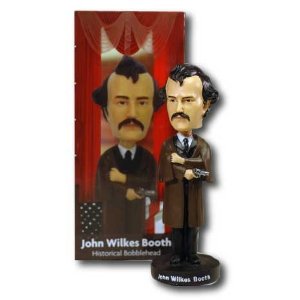 When I got up to DC....I made up a list of some significant historical places in the region that I wanted to see.  One of those....was Gettysburg.  So I went.

There's alot of fascinating things that you come to realize about Gettysburg, from the battle itself, to the geography of the region and it's affect on the battle.  One of comical things that I came to realize....was the commercialization of the whole area.

There are probably over 50k different gift items in the whole town, and at the national park store.

This week, some reporter for the Hanover Evening Sun came to see this amusing bobblehead doll of John Wilkes Booth at the Gettysburg National Park visitor's center.  It took a few minutes for the clerk to realize the lack of humor in having such a bobblehead doll....and then the whole mess of Booth bobbleheads were removed from display.

I'm guessing they are sitting in some storage room while they try to figure who ordered the bobbleheads and where were they made.

They sell for around $20 online.  While the company doing the merchandise side is from Kansas City....I seriously doubt that they are made there.  My humble guess is that they were manufactured in China, by some kid named Chang.  He made a thousand of these, and didn't really know anything much about the battle at Gettysburg.

So if you make it out to Gettysburg, and you'd like a Booth bobblehead.....don't expect to find any over at the National Park Center.
at Tuesday, March 13, 2012 No comments: 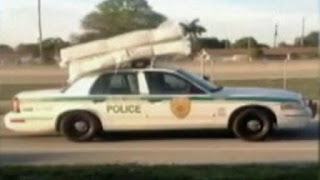 From the news....a cop, who shall remain nameless (in this blog), was days away from retirement.  She made a decision at the end of the day, because local policy allows her to take the cop car home....to stop by a mattress shop.  She had the guys toss the mattresses on top of the car, and drove on home.  Someone took the picture....and this south Florida cop is terminated.  My humble guess is that the force will rehire her after three months, and let her finish out the few weeks that she needs to retire.  The amount of stupidity here?  Well....sadly, there are one thousand folks across America every day, who drive home with a mattress on top.  It may not be safe, but the truth is....we all do it.

The Justice Department decided to go against the Texas law which requires an ID....to vote.  Sadly, they wouldn't take on the other various laws that require an ID....like registering a car, buying a weapon, buying smokes, buying booze, buying narcotic-like drugs at the drug store, identifying yourself to a policeman, or cashing a check.   It'd really help a lot in Texas, if they'd remove those ID requirements...so poor people could just randomly cash checks or buy booze throughout the state.

Some law enforcement folks are now admitting there is a underground currency being used in the US.....Tide.  Yes, that detergent.  What the cops say is that it's easy to steal and without any serial numbers.....folks just come and go.....bartering with the stolen Tide.  On the black market, the big bottle goes from $5 to $10 each.  You can imagine some whacked-out drug dude....meeting his connection in north Birmingham on the street, and he's got four bottles of Tide to swap for some drugs.  Then you have some bust at a house in the town....where they find a room with six hundred bottles of Tide.  The Tide gets moved to some police storage room, where they try to figure what to do after the case has closed and the guy gets sent off for two years of prison.

Here locally in DC....the cops finally woke up and asked the magic question....if punks and thugs have been robbing hundreds of folks each week of their laptops and cellphones....where are they dumping them?  The answer?  A big sweep across small private grocery operations in DC occurred yesterday.  Sixteen folks arrested, for operating a resell operation, of stolen cellphones and laptops.  I'm guessing a sudden drop in robberies over the next month....after the punks figure out that they don't have anyplace to sell their wares. As for the cops?  It only took a year or two.....to finally figure this out.  Maybe that's a positive.
at Tuesday, March 13, 2012 No comments:

A couple of days ago....we had some Army sergeant in Afghanistan.....who finally had enough....walked out the gate, and shot sixteen local Afghans.  The group included women and children....just random victims.  He walked back onto post, confessed his crime, and has upset an entire nation.

What the Army has hinted over the past day....he'd done three tours in Iraq, and this was his first combat tour in Afghanistan.  There's been over a hundred US military officials, State Department folks, and administration officials....who have apologized for what occurred.  The Army says they will have a swift investigation.

No one has done any studies over the effect of taking a guy through twelve months of combat, giving him eighteen months off, and returning him back to another twelve months of combat.  There are four of these combat tours on this guy's record.  I'm guessing that he probably was on medication situation, and probably was border-line nuts for another deployment.  The problem is that the Army has a couple thousand guys who have done this schedule, and are on some profile of sorts.  At any moment.....some guy could go nuts and make issues for the civilian population or his own unit.  You just can't be sure of nothing.

In World War II, a guy would be on the front lines for a month or two, and then get a week or two off.  Then go right back to the war.  We've gotten to the point where this really isn't a war, but we pretend it is.  Then we hustle guys back for eighteen months to relax....promising them that they will return to the war.....time and time again.  To be honest, these guys haven't really relaxed since 2001, and whatever the Army says is down-time.....is counted in minutes and hours, until they return to the front again.

The Afghans will ask for the guy to be handed over....which I seriously doubt will occur.  There will be some court martial event for the guy....with the death option looming over his head.  The problem is....if he had any written comments in his medical records over mental issues.....you won't be able to give him more than twenty years.  The Afghans will be furious, and the Army will be sitting there and wondering about three thousand other guys that they currently hand a rifle to....on a daily basis.

The best for all in this circumstance?  Ask the Americans to just leave, and accept the Taliban guys taking over....dishing out their method of rogue activity.  Better to have an Afghan rogue guy shooting Afghans.....than an American Army soldier.
at Tuesday, March 13, 2012 No comments: