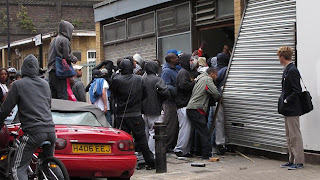 There are a couple of facts to the case, an inflamed society (because the cops still don't think they have enough evidence to arrest), and a bunch of media folks saying smart and stupid things.

Yesterday morning....Geraldo Riveria of Fox News....came out and noted that the hoodie that the kid wore....while not a big reason to the shooting....was a contributing factor.  He even admitted that he just didn't ever want his son to wear a hoodie in New York City....because the cops, the bad guys, and the public.....all saw it as a magnet for trouble.  Geraldo got into all kinds of trouble, and various news journalists came out to defend the poor hoodie crowd.

Let me offer some observations.

First, if you came into DC around midnight and you had the cops go around picking up every kid eighteen and under wearing hoodies in DC.....the vast majority would be carrying either drugs or weapons.  The DC cops know this....but they can't freak out the public by having a anti-hoodie strategy.

Second, if you went to any urban dweller who'd been robbed over the past year by a kid (under eighteen)....the vast majority of the urban dwellers would say that the kids were dressed in hoodies.  If you asked the same guys if they feel threatened now by kids in hoodies when walking around in malls or parking lots.....they'd all say yes.

Third, innocent hoodie kids think it's pretty cool....but along about late evening hours in DC....if you walk around in a hoodie.....your gang buddies might associate you with the wrong group....and kill you over your hoodie dress situation.

Fourth and final.....cops look at hoodie kids like a magnet.  Maybe nine out of ten kids in a hoodie are clean and innocent.  Cops aren't looking at the innocence business....they look at crime on a daily basis and the statistical average that most criminal kids they come across....wear hoodies.

So in the end....hoodies may be great fashion statements.....but the reality is that they are a magnet.  Maybe you feel lucky tonight.....maybe you don't.....but the odds of wearing a hoodie and getting into some kind of trouble or mess is higher than wearing a plain $14 K-Mart green wind-breaker.  It's kind of sad that you start thinking over your life coming to bad ending....just over a fashion statement at 10PM at night.
at Saturday, March 24, 2012 No comments: