My Ten Rules of Pondering

1. Think between fact, opinion, and best guess when sorting through a situation. You have to be curious.....willing to accept some things initially. Sometimes a best guess has to be accepted as fact until proven wrong.

3. Nothing can be absolute. Facts can change....mathematical theories can shift....planets can be dissolved by black holes....and sometimes people fudge data collected (just to make you happy).

4. Act like Socrates.....ask questions. Even if you aren't a genius.....you might accidentally discover something that someone had never conceived.

5. Nothing is perfect....even conclusions to situations or problems. Maybe the only solution....is a half-ass answer....because the second choice would be a total-ass answer.

6. Failure in thinking...is a work in progress....so you learn from miscalculations and misinterpretations.

7. History has the potential of repeating itself....over and over and over. Don't discount history.

8. Wisdom is gained by observation....not by a college education. Your use of wisdom in thinking...means you sit and listen to folks....and observe....before you come to a conclusion.

9. If one and one equal nine by the time you come to your conclusion...it must be right...or least until you find a better solution.

10. A broad prospective....requires that you broaden your horizons, your readings, your view of the world, and your perceptions. When looking for solutions....sometimes...your imagination will create the final thought....when all else fails.
at Saturday, April 14, 2012 No comments: 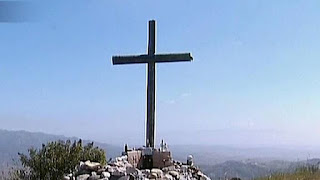 I don't typically write letters.....so this is a letter blog instead.

I came across this episode brewing out at Camp Pendleton, California this week.  It's an odd situation.  There on top of a peak...within the boundary of the Marine post....is Mount San Onofre.  I've read through the story.

About a decade ago....some Marines had returned from combat duty and were in a fairly emotional state of mind.  They had lost friends, comrades, and associates.  There recovering from the war and it's drama....they found some relief with the mountaintop.....by erecting some crosses.  They made it into a sort of pilgrimage.....where they could march and hike to the top, and think about an emotional release.  For a number of years....it was just a quiet secret that Marines shared.  Around a year ago.....some local newspaper got onto the story and thought it was a great story to tell.  Sadly....here came along this group..... the watchdog group Military Religious Freedom Foundation....who feel that you have allowed this government owned property to become some religious supported affair.  They want the crosses removed.

I've read the various news pieces and how you are now faced with the decision to be made....as the Commandant of the Marine Corps.  I can guess.....it's not a simple thing.  So I'd like offer an observation or two.

I realize....I'm not a Marine.  The closest that I can come is some uncle who spent time in the Marines in WW II....out in the Pacific....getting Malaria and a number of dysentery diseases....got shot on an occasion or two.....and somehow survived to come back home to Bama.

When a Marine is landing on a beach with a vastly stronger force opposing it and prepared to wipe the Marines out....the Marine on the vessel has to be putting his trust and faith at that moment into something.  He has to believe something will protect him in this darkest hour.  Frankly, it isn't the Constitution that he's got in his mind at this point.  It's a religious belief carrying him in this potential last hour of his life.  It doesn't matter if he's a Catholic, Christian, Buddhist, Mormon or Hindu....this Marine is meditating over his fate and wants some little ounce of extra belief carrying him into battle.

Deep in a foxhole....with a ton of mortars coming down upon a Marine.....he doesn't think about the various amendments of the Constitution or the lingering effect of eighteenth amendment (outlawing the sale of booze).  He's sitting and thinking over his odds of surviving and using every ounce of his belief in his religion....from the Jewish persuasion to the Baptist.  He needs some miracle....which the Constitution just isn't going to provide at that unique moment.

There on the backstreets of some wild Middle Eastern town....there's kids running in one direction and Jihadist killers running in the other.   A Marine is sitting there and praying that someone or something is watching over him....and will ensure he doesn't shoot an innocent human being.  He needs an extra ounce of faith in something.....which just isn't going to come from the Constitution.

General....you are taking youth from America's heartland for a period of time and hoping....believing....and putting faith in the idea that you can return them safely to civilian life one day.  This faith that you use in this daily mission of planning and executing a Marine mission....does not come from the Constitution.  You are counting on something beyond that.  Like the Marines in the foxhole.....you need an extra ounce of belief in something.

So here is this mountain top in California.....on Marine property....that some Marines have chosen as this refuge of sorts.  They have suffered a great pain.  They have seen great Marines taken down.  They have lost something more than they can describe in words.  This emotional release on the mountaintop....gives them a momentary release of that pain.  The Marines owe them something more....than the Constitution will ever provide.  That is the sad truth.  The Constitution cannot heal a wound, make a man feel relief, or take burden off a damaged soul.

For the folks at the front door....demanding the crosses be removed?  They have to be incredibly strong human beings...without an emotion.  It is certainly great to see such individuals who can survive intact.....through various tragic events in life and never have scars over their soul or lost their will to live.  I salute them....and their enormous belief in the Constitution.  Maybe the Constitution really does protect them in their greatest hour of need.

For the rest?  The Marines have knocked at your door and asked you to come and serve.  You swear an oath and you will march into the valley of death....counting on something beyond the Constitution to bring you safely home.....and hopefully, you will survive.  The Marines and the nation owe these men something beyond the Constitution.  We owe them an emotional refuge...without restriction to any religion.  If a Buddhist Marine needs a quiet hilltop.....he can come.  If a Jewish Marine needs an hour to reflect upon his lost friend....he can come.  If the Baptist wife of a dead Marine needs an emotional uplifting experience....she can come to the mountaintop.  If they want to come and leave a bottle of Jack Daniels to their lost friend....they can do so.  If they have a empty shell from the battle to remind them of the great cost put upon their life....they can do so.

In the end.....the Marines owe their own....more than what the Constitution can ever provide.  It is a sad fact of life.....good young men, who dreamed the American dream, swore an allegiance and oath to their country and their fellow Marines....carrying it through to the end.  Those who survive, have still an oath to carry out, but are emotionally distraught and need more than simple words in the Constitution to survive.