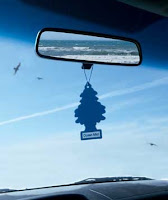 There's two interesting stories for DC today.  First, cops in the local area (DC only, not Virginia) now admit that they can give out a $35 fine for having  a air freshener hanging device on your rear-view mirror.

The deal?  Well...they say it obstructs your view.  So once they pull you over for issue number one, and note your stupid air freshener....it's another second ticket that comes into play.

It's kind of comical but it's a nifty way that you can probably pull in another million dollars a year for the city government.

The second item of interest?  Marion Barry (our city councilman) did another speech to get himself into trouble.  At some hearing yesterday....the city councilman told the head folks for the University of the District of Columbia that they really needed to recruit hard from the local area and get the right folks into the right positions.

Barry then said: "In fact, it's so bad, that if you go to the hospital now, you find a number of immigrants who are nurses, particularly from the Philippines. And no offense, but let's grow our own teachers, let's grow our own nurses, and so that we don't have to be scrounging around in our community clinics and other kinds of places, having to hire people from somewhere else." (quotes from the Examiner)

It's the second time in a month that he's hit on the Asian community.

As for the comment over the Philippine nurses?  Well....you have to realize this....Marion goes over to the local hospital on a fairly regular basis.  He's not in great health, and the nurses at the local hospital....including the Philippine nurses....are doing their best to keep the old guy ticking and alive.
at Tuesday, April 24, 2012 No comments:

The Terrible Art of Bribes

The business world took a tumble yesterday....as it came out that Wal-Mart's Mexico division....probably paid some bribes.  Yes....it is unbelievable....bribes paid in Mexico.  Who would have thought that bribes would ever be paid in Mexico?

The trigger for the bribes?  Well....if you want to build stores of any type....you need to apply to the local and regional government.  Forms and stamps on the forms must be accomplished.  A form can linger in a box for days, weeks, or months.  There's no way of forecasting how fast twelve forms can be reviewed and stamped in a office of four city government employees.

Wal-Mart figured out the mess in Mexico and said "fine".....we will pay some bribes....to build our stores.

House Demoracrats are furious about hint of bribes.  So they want a House investigation of Wal-Mart.  Facts must be gained from this terrible business.

Years ago....I was sent off to Panama for three years.  During the first month there....I had a guy explain the bribery game and how I needed to play it.  Cops were typically $10 a situation bribes.  The electrical guy who would fix up my power for the apartment?  Twenty bucks.  Anything to do with the city government? Ten bucks was typically enough.  The vehicle inspector?  Ten bucks.  There's really not a single function of the Panamanian government that doesn't function without a bribe.  Most folks I knew....always had a ten in their shirt pocket or in the car....to cover a situation that had developed.

The plain truth is that once you cross the border heading south....almost every single government requires a bribe.  But once you start thinking about what Wal-Mart had to do.....to get four Wal-Marts approved within the city limits of Washington DC....it was a bribe of sorts.  There were various community packages done up as agreements before Wal-Mart would be allowed to build.  Various community organizers and special interest groups got promises of special hiring procedures and some cash donations to the right community projects.  Only then....would Wal-Mart be 'blessed' to build in DC.

The difference between the DC and Mexico bribes?  There isn't much difference.  You don't build....unless you cooperate.

So, I'm inviting the Senate House members to go full-force ahead.  And by the way....let's toss in the procedures for opening a Wal-Mart in DC....as something to investigate as well.
at Tuesday, April 24, 2012 No comments: