I grew up on a farm.  To be kinda honest, it's a privileged lifestyle.  You don't come to realize that until ten years after you leave the atmosphere.

Generally, every single day....there's excitement and drama on a farm.  Things break.  Animals get sick or figure out a brilliant way of escaping from your field.  The $70k tractor you bought last spring might spring a strange leak which the manufacturer says isn't covered by the warranty.  Some county agricultural agent might stop by and spend two hours talking about some Chinese bacteria that is infesting cotton (although you don't have any cotton....you still sit and are entertained by his explanation of science stuff).  A one-day sale on barb-wire occurs at the Co-Op and you have to put down everything and race over to buy twenty rolls at half-price....which you might not use up for another twelve years.

A kid learns alot on a farm.  One of the big things is the fact that on any given day....you could do one stupid thing and get killed.  All it takes is a cow episode where you are pushing up a cow through a funnel operation to a chute where it's going to get a shot for something.  One brave moment by the cow....to turn around and run you over....is all it takes to bury you six-feet under.  You have to learn to read a situation....moments before something happens.  A sound, a vibration, a twisted neck, an odd thump noise.....something that you can read and stop something in a moment's notice.

There's no certified training program for a kid....it's mostly learn-as-you-go.  My dad felt secure in giving me the keys to the soy bean truck....loaded down with tons of soy beans....and tasking me to drive thirty miles to the delivery point and dump the load.  I didn't think much of the task, but later got out on the big highway and could actually get that truck up to sixty-five miles per hour.    It was at this point where I had some old gal pull out in front of me and I lightly tapped on the brakes....to find that tapping didn't do much of nothing.  Stomping....became step number two.  And then full stomping (like you were throwing that right leg down on that brake pedal with all 190 pounds of your body on that leg).  You kinda figure out after that....moving along at 65 miles per hour with tons of soy beans in the back....just won't work.  You have to think a thousand feet ahead of you and concentrate on idiots bringing harm to you.  You don't get this type of mentality growing up in the inner city.

This week....reality came to farms across America.  The US Department of Labor is now pushing out this seventy-odd page safety regulation.....which will ultimately call and forbid anyone under the age of eighteen....from handling raw materials on a farm.  I had to read through a fair amount of news pieces....to realize what raw materials meant.  This includes cattle, pigs, horses, chickens, wheat, pumpkins, corn, cucumbers, etc.

Added to the text of the seventy-odd pages....if you were under the age of sixteen....you just couldn't ever operate a vehicle that had a motor and was more than six feet tall (oddly, they just couldn't say the world tractor, they had to say vehicle above six feet tall).

Now, I read around and grasp the fact that the Department of Labor hasn't really updated a single regulation on their books since 1970.....so you might expect them to retire a couple of guys and bring in some young punks.....and decided they had to invent something new.

Naturally, this upset a bunch of folks in Congress, the Senate, and around the farming belt.  If you take away this manpower....then most family farms would shut down within ten years.  Folks would just give up and admit that you can't get ahead.  Your only way of avoiding this mess....would be to convince 14-year old Karl to do the work and just NOT report you to the Labor Department.

Somewhere in the midst of eighth-grade civics....the teacher learns that some kid named Karl is doing such work and wants him to report to the Labor Department.  Karl does this....and Dad goes off for eight months of prison.  Karl asks the civic instructor what lesson in life was gained, and the instructor just goes blank.

The sad thing here is that there is a potential threat to kids.  You can't get away from that.  But there are fifty year old guys in their garages....who accidentally kill themselves by not double-chaining a vehicle when it's hoisted up.  Are you going to outlaw home-garage repair work too?

Or how about sixty-year old women who buy some type of poison for their garden but mixes it up with some other stuff and uses it for indoor plants....which ends up killing her accidentally.  Would you outlaw home gardening by old women?

Or how about fishing a hundred feet off the outlet area of a dam by Gus and Henry?  They both know this is where fish meet up with this big water-flow deal but it's a very unsafe place to be positioned.  Neither thinks much about this until they capsize and Henry drowns.  Would you outlaw fishing on lakes?

Or how about Ronny who is a lousy golfer, and slugs balls way off the course.... accidentally hitting some old guy in the head getting out of his SUV at the Wal-Mart parking lot.  Would outlaw lousy golfers?

I'm sorry....but America just isn't this bastion of safety.  It never has been.  Guys in the 1820s would ride a horse off in the morning....get totally drenched and wet by a thunderstorm in November....and die ten days later from pneumonia.  A horse team would get riled up by a snake on the road....run off the road and kill the two old guys on board the wagon.  A guy running a bush-hog over his field might run over a stomp and toss back a chunk of wood toward the driver....killing him instantly.  We aren't a safe society.....we never were.

So I don't have this positive feeling over the seventy-odd pages of text to save America's youth.  Maybe the Department of Labor ought to write up a rule or two over forbidding kids from using drugs.  They might save thousands of lives a year....if they were so bold or naive enough to believe words would make much difference.

My humble guess is that we will end up with some kind of training and certification class for twelve-year old kids to attend.  Karl Junior shows up and spends an entire Saturday learning how to properly string barb-wire by a government instructor....then gets certified by this guy.  Next Saturday, they have another class where Karl Junior learns the proper way to run a mad cow up a chute.....getting certified for that.  Eventually, Karl Junior is angry and hostile over the number of Saturdays that he has to waste over this and why some idiot from a urban college in California is teaching him the wrong way in doing things.

What's left?  So far, no idiot in the Labor Department has written up any regulations over border collies not managing cattle or forbidding them from hustling up cows in a chute.  Maybe that's a good thing.
at Thursday, April 26, 2012 No comments:

If You Buy It, They Will Come 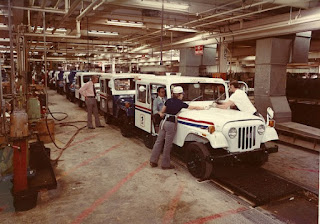 It was one of those odd moments in US postal history on Wednesday.  Tom Carper, Senator from Delaware (no, he's not a Republican)....concludes a thought-provoking moment in the Senate by suggesting that the US postal system ought take electrical power from windmill farms (friendly green energy of course), to run a mighty and great fleet of postal jeeps....all battery-power....like those Volts....to replace the 25-to-30 year old delivery jeeps that they currently have.

Senator Tom wrapped up by saying that this idea might have been on the edge of reality.....but "we need to be thinking boldly, and the postal service needs to do that."

I sat pondering over this moment.  Basically, the Volt guys at GM have to be in this process of rethinking the whole business strategy with the Volt.  It's not selling like hotcakes.  So maybe you tear apart the current look of the Volt and make it into a delivery vehicle instead.....then force-sell them down the mouths of the postal system.

You can imagine Karl and Marty at your local post office....being told that the new seven postal jeeps will arrive today.  They go out....and find them in the parking lot.  Then a moment of shock come to Karl and Marty.....seeing some type of electrical charge-up meter on the dash.  A week later....some electrician arrives to attach seven charge-up devices to the side of the building.  He warns both Karl and Marty that these are very powerful devices and not to be played with.  Karl immediately puts his finger up into the electrical discharge valve and hits the green button....falling over dead.  Marty is briefed later not to put any bodily part up the discharge valve and push the green button.

Weeks pass, and Marty is on his route.  He stops by Miss Deena's house.  She invites him to the front porch to sip some ice tea and taste some fresh muffins.  About two minutes into this visit while watching his battery-powered jeep on the post box.....he notes there's a funny electrical smell in the air, and then notices flames shooting out of the jeep.  Some kind of electrical discharge episode has occurred, and the mail is on fire.

Marty's jeep burns up completely, and the postal investigators focus more on the stop to have tea....than why the battery set the jeep on fire.  Eventually, some dimwit Congressman from Louisiana eventually asks about the incident, and folks admit....that there is a one-percent chance of a bad battery situation on the new battery-powered postal jeeps.  A month later...things happen.  Congress ends up directing all six thousand newly purchased battery-powered "Volt-delivery vehicles" to be dumped.

Months pass, and Marty is at a government property sale.....and buys six of these jeeps for several thousand dollars.  For the rest of Marty's life....the only vehicle Marty drives around his small town....is this battery-powered car.  He naturally swears by them.  What Marty doesn't want to admit....is that he might have dropped a can of beer over the stupid battery storage box under the driver's seat of the vehicle.....and accidentally set the jeep on fire in the first place.

Sadly, stranger things have happened in US history.  So the Senator from Delaware might eventually get his wish.
at Thursday, April 26, 2012 No comments: