Some guy, writing for Vanity Fair....went back over President Obama 1995 autobiography "Dreams from My Father".  There's this mysterious girlfriend  that was delivered in magnificent detail.  Well....the writer has now come to realize, after conversations with the President....that this single unusual New York girlfriend....was actually a composite-type character (multiple gals, as the President described her).  It's not a big deal....if you ask me.  But then you come to this odd feeling....what else is composite-character and composite-detail?  This is something you would ponder about.  And this composit-gal....Genevieve?  Well....we aren't even sure if it took four gals to equal a significant Genevieve or twelve gals.

This vet who had the run-in with Spirit Airlines.  The deal is this....the vet has terminal type cancer.  He wanted to shift or change his ticket around, and the airlines has this policy of requiring a doctor's note.  ALL airlines have the same policy.  If you show a doctor's note....then they show some compassion.  Well....the guy's doctor bluntly told him....DON'T travel.  I sat and pondered over this for a while.  The policy is simple and everyone goes by that detail.  I personally don't agree with the vet or boycott of Spirit Airlines.  They went by their rules, and the guy might want to listen to his doctor.

Finally, some guy swears up and down that he found the body of Ossama.  You have to figure the body was dropped at a depth of at least two thousand feet, probably in an area of the size of the northern quarter of Bama.  And this guy says he found it?  And what value is this?  If you drag the body out....you become the most hunted man on the face of the Earth.  I hate to suggest this....but we might have been better off talking a deal up with some Mafia guys from New Jersey.  Those guys know how to hide a body.
at Thursday, May 03, 2012 No comments:

I think I'd actually vote for Roland Sledge.  But I'd like to meet his associate who messed with the electrical fence first.
at Thursday, May 03, 2012 No comments: 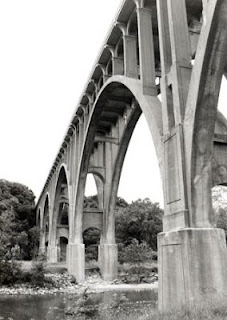 In 1931....a year before Rosevelt came along with various public works projects....this bridge in Ohio was concluded.  The purpose of the bridge?  Well....it was connecting Cuyahoga and Summit....towns outside of Cleveland.  In a normal day....close to 14k folks travel either up the road or down the road.  Folks have been crossing the bridge for over eighty years.

To be kinda honest, over a five-mile stretch of the river....there are seven bridges.  So even if you took out this one bridge....progress wasn't really stopped in any fashion.  Not to challenge the dimwits, but to prove your point.....you'd need to destroy probably twenty bridges along the river....thus challenging the public for years and years....awaiting replacement.....while limited from crossing the river.  If you wanted Popeye's chicken....you might have to travel an extra five miles.  If you wanted fancy $9 underwear, you might have to go the next county over to the next fancy mall.

It's hard to say a bridge represented wealth or such, unless you really got doped up on some funny message that a college professor gave you and you felt that class warfare can include bridges.

In 1880's America, if you were going to cross some creek and your community had some folks with available time....you built a wood bridge.  It's hard to say it was class-advantage or class-warfare in 1880.  Folks just got tired of getting wet.  If you had a fairly wide river....like the Tennessee River, then you'd risk risk crossing at the wrong time of year and risk drowning if anything wrong.  Again, nothing involving class-warfare.

The five guys in this case?  Well....they got pretty eager, and just mentioned around that they sure did need some C-4, and this guy walks up....sells the stuff.  And from that point on....the authorities were onto the scheme.

I've read the various reports....this guy selling the C-4 explosives?  Well....he's some character.  His background includes grand theft, tampering with records, and aggravated theft.  This will be brought out in the court-case against the five dimwits.  The sad truth is....if you want to go buy C-4 illegally in America....you gotta deal with some guy with a record.  It's not the kind of illegal business that you conduct with some Christian guy from Chattanooga who paints dogs playing poker and sips only Diet Tab.

So this brings us full circle.  We are advancing as a society now....to the point where five dimwits from your community might meet and discuss blowing up a bridge, in order to make a statement about wealth or progress in your community.

Here in the heartland, five guys might typically meet and discuss the NCAA bowl selection process, the NFL draft selections, Seal Team Six's success in getting Ossama, the funny taste of Pabst Blue Ribbon beer, lusty women at their local church, the advantages of Windows Seven, Ford over Chevy, the proper depth of septic tanks, the best grilling sauce, the chances of the Dolphins making the playoffs this year, and their perception of Pat Buchanan being finished as a commentator.  On a list of fifteen thousand possible discussion topics....blowing up bridges would be the absolute last choice for a discussion.

These five guys have lost their moral compass....smoked a bit too much weed.... interpreted their college professor in an odd fashion....and actually believe in some type of class-warfare.

Tonight, off in some fail in the Cleveland area....these five guys are sitting there and contemplating their future.  These are likely to be federal charges, with federal time.  I'd be thinking that the top guy or planner gets the biggest share of blame on this....with one or two guys breaking on the others.....to blame the right folks.  Jail time here for the top guy?  Figure a minimum of ten years.  Your four years in college?  Totally wasted with a ten-year stretch in some federal prison.  You might as well have gone over to the BP-station and gotten a job as a cashier instead of wasting four years at college.