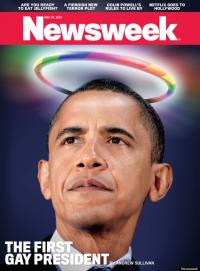 This week....Newsweak comes out with a new cover and a nifty story.  There is one problem.

For four years, James Buchanan occupied the White House.  He was succeeded in 1861 by President Lincoln.

There just aren't that many historians that will even argue this point.  Most will come to agree....Buchanan was the first gay President.

The thing about Buchanan?  Well....he was supposed to be this compromise type individual that Southerners and Northerners would come to agree with in some degree.  The truth is.....he lacked authority, leadership, and probably helped in some minor ways to lead the country to the doorsteps of war.

As for Buchanan's romance?  Well...for folks from Bama, it may come as a shock....but Alabama's own Senator William Rufus King was room-mate and close associate of Buchanan for over fifteen years.

So as you gaze at the Newsweak cover....it's another case where they didn't want to dig up any history.
at Sunday, May 13, 2012 No comments:

The Thing About Risks

Most folks on Friday evening came to see this piece on J P Morgan and a two-billion dollar loss.  A bunch of the wannabe TV news folks simply jumped up and recited some piece about more legislation and more rules....that's the only way to stop such foolishness.

What none of them really spoke much on....was why J P Morgan and associates would sit and risk hedge bets in such a fashion.  They skipped right over that topic.  They really didn't seem to care why anyone would take a billion or two.....betting them on highs and lows in the market in such fashion.  So I had to dig a little.

You see, there's this problem with Greece brewing.  Since the election two weeks ago....there's a necessity for the Greeks to form up a government, and get behind the deal that they signed with the EU.  The deal allows for cash to flow into Greece....to cover the most extreme of necessities and force the regular Greek guy to live a pretty low and unhappy lifestyle.  That's the only deal that Greece could get.  Well....folks aren't happy about that deal, and they aren't happy with the regular government guys they've been dealing with.

Yesterday, if you paid some attention to comments in the Greek sphere of life.....there's the hint of just six weeks of cash left in cash....before the whole government falls apart.  The EU you see.....has not yet delivered their loans.  They are waiting on the formation of a new government.....which hasn't happened.  It won't happen this week.  It probably won't happen next week.  And they just might say that they disagree with the deal worked out.  So in six weeks....they would literally fall out of the EU and the Euro would likely dissolve as their currency.

In basic terms....Greece becomes some a 4th world (not even 3rd world) economy, where you invent a new internal currency out of thin air.  Life becomes fairly miserable.  You accept some radical left or radical right leaders.  Some folks get shot in the middle of the night.  And life becomes a bit serious.

The exchange rate of the Euro to the dollar?  Oh yeah....that's what J P Morgan was all concerned about. Currently.....you have to spend $1.25 to buy one Euro.  Banks have bought stock and various devices at a standardized rate.....so they'd like it to stay stable.

If the Euro slipped, and suddenly it took $1.10 to buy one Euro.....it'd mean all those investments in Europe are stuck there because if you tried to convert them back to dollars....you lose a minimum of ten to fifteen percent of your package.  J P Morgan realized that several months ago.  They know it's better than a fifty percent chance of this massive fall of investments.

So J P Morgan invented several ideas where they were going to bet against themselves, but they really didn't have a iron-clad strategy here.....and instead....they lost the two billion playing out a untested idea.  Meanwhile, as you might guess.....their massive investments in Europe are still in play.

The guys at ABC and CBS?  Well....they keep talking about how more legislation and laws need to be created.  They have yet to figure out why J P Morgan would risk two billion.  The truth here?  There might be ten billion in play by various investment firms.....all due to be lost....if Greece falters here.  Wonder why ABC and CBS won't talk about that?  How about the guys at NBC Nightly News?

So in the month of June....there's some pretty big chaotic things at play.  You might want to watch Greece.  If you had investments in a 401K....you might want to switch them over to bonds.  Been wanting to take a trip to Europe but the Euro was always too expensive?  Don't worry....it's going to be a bit cheaper in the months to come.  Heck, you might even start thinking of taking a trip to Rome for forty percent off the regular price of two years ago.

At the end of the day.....you really have to ask more questions than what the nightly news folks can answer.....sadly.
at Sunday, May 13, 2012 No comments:

The Logic of Less and More

First, we did more with more, with all the funding, manpower, and resources at our disposal. We surged and did great things.

Then, we did less with more....losing part of our funding, allowing my excess manpower to be stolen, and resources were taken for other projects. We surged but not quiet as much.

Then, we did nothing with more....as the majority of my manpower was allocated to other projects, funding was pushed to non-essential projects, and resources were completely routed to other groups. We looked good on paper, but our surge was to the "power of zero".

Then we started doing more with less....as manpower, budgets and resources were cut. We learned to do less and accept that as remarkable.

Then we started doing less with less.....as more manpower, budgets, and resources were cut. We prioritized and settled for what was essential only.

Then we started doing nothing with less.....with remarkable priority work. We found numerous things that we just wouldn't do. Everyone was impressed that we could cut and whittle manpower, budgets and resources.....to look this good.

Then we started doing more with nothing.....where the leadership accepted everything and thought our remarkable capability of handling budgets, manpower and resources should be written far and wide.

Then we started doing less with nothing....where leadership found that we were capable of doing very little except emergency work with the non-existent budget, manpower or resources.

Then we started doing nothing with nothing.....and we came to be non-existent as an organization. The sad thing....is that I've worked for all nine situations.
at Sunday, May 13, 2012 No comments:

You get yourself elected as governor.  You know on day one that your state is deep into debt.  Your promise to the voters as you got elected was that you would negotiate through the state house....these budget-cutting measures.  You figure that the economy is just months away from turning around and that you will find yourself in a fairly safe position within a year.  You wake up this week.....to discover yourself deeper into debt ($16 billion) and even the massive taxes that you talked everyone into....won't cover more than half of that.  Plus you have to consider that you haven't truly cut the government cost yet, so escalation is very possible. Oh, and this is California.

What happens to toward August?  Higher student tuition and fees are almost guaranteed.  Right now, it's $31k to live in the dorm for a year and attend UCLA (you could save $10 by living in Dad's house...if it were close enough).  You can figure the $31k will edge up another $2k minimum.  For you out-of-state folks who pay $54k a year for UCLA dorm-life?  Maybe another $3k for you guys.

As taxes edge forward....there will be more companies and wealthier individuals making the decision to re-locate.  My humble guess is that no recovery for California occurs in 2012 or 2013.  I'm also guessing that some students will wake up and decide that maybe a two-year community college is the better deal than UCLA.

As for Governor Brown and the mess?  I wouldn't be betting on a second term.  In fact, you'd have to be an idiot to volunteer to run for governor....if you ask me.
at Sunday, May 13, 2012 No comments: