The ideal situation in a democracy is that you are smart enough to find a guy, who says he's honest and capable of thinking like you do....and you get enough votes for him to represent you.  Part of the end deal on this....is that the guy you elect....actually reads, comprehends, and is fully willing to vote on things.  If the idiot just goes over to the capital....refusing to vote on anything, then demands a national referendum by the voters, then he's saying he just isn't willing to do his job.

Yeah, kinda like those guys in California for example.

This week, there's an episode that has occurred.....which won't be in your local paper, or spoken about by CNN, ABC, or CBS.  Nobody would dare talk about it because it'd make you start to think about the spiral of things in the US.

Folks in Switzerland for the past decade, have been seeing more and more referendums appear in local and national voting.  The leadership, which they vote and pay salaries to.....really don't want to have any say on things like this.  They'd prefer that the public votes on things, and they ride the easy train into work each day.  No arguments....no discussions....just let continual national referendums be part of the public situation.

Well.....today, there was a vote to occur which will basically says that they've gotten sick and tired of having too much democracy...too much national referendums.

As one individual put it......"too much democracy kills democracy."

Eventually, a guy might get to the point of asking why bother having to pay out money to political folks....if they aren't willing to do the job you elected them to do.  At that point, things might get sour real quick.

You can imagine something like this eventually occurring in California.  Folks realize that nothing ever gets fixed, and this voting mess just means billions gets generated every election year to fight over one cause, or support another.

It's best that CNN avoid discussing this mess.  You'd just start to ask stupid questions, and figure one of the top five problems with politics in America today.
at Sunday, June 17, 2012 No comments: 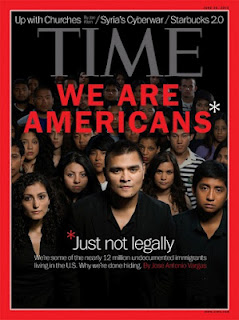 This past week...a couple of days prior to the President's change of heart over immigration....came a new issue of Time.

I quit picking up or reading Time almost six years ago, but I noticed the cover, and by this weekend....I was asking myself a fairly stupid question.

It's odd that five days before the President makes a huge speech and one of the top three impact changes of 2012....this major topic comes out in Time magazine.

It's like you getting an advertisement by your dentist a week before your visit over a new-fangled cleaning procedure not covered by your dental insurance....which has a cost of $200.  As Doctor Joe brings you into his chair.....he brings up his information packet from the last week.  It's all geared for a gentle sale to you.

A humble guy would look at this and have a laugh.  Somewhere about six weeks ago....there was a drawn plan for the immigration change.  Some Time writer was likely brought into the White House circle.....given ten pages of info and statistics, and asked to gear this piece toward gently informing the public of some major topic.  It would be a easy sale when Doctor Obama came into the office and smiled as he lifted the curtain over a major change.

Poor journalism?  Well yeah.  But then....how many folks are on the subscription list now....compared to thirty years ago?  To be honest....Time lost touch with a majority of Americans over the past decade.  So than acting like a talking dog for the President.....it's mostly a comical side of the whole immigration story.
at Sunday, June 17, 2012 No comments:

After a fair amount of pondering, I've come to realize three significant things about Friday's episode with the President and the immigration business.

First, he could have come out and asked Nancy Pelosi to press forward on this deal and work a compromise through the House, then have Harry Reid slam this through the Senate.  Sadly, what the President wrote in sixty-odd lines...would have required the House and Senate to craft over 1400 pages of text.  So, the President saved a significant amount of time by doing this....the way that he did.

I will admit....the S3992 bill....the Dream Act...which Senator Rubio wants to press forward on....contains most all of what the President mentioned, and is only 27-odd pages long.  But it'd freak out most of the head Democratic guys if you tried to make some that readable and understandable....if you ask me.

Second, and on the odd side.  The unemployment rate across the US runs from five percent to over ten percent.  Some areas are in serious trouble with unemployment closer to thirteen percent.  So, you are turning 800k folks loose in the US....with new work visas....assuming that they will find work amongst the mess in front of the current folks?  Right?

Something about this doesn't make much sense.  My humble guess is that 250k of these folks will be lucky enough to hang out in some community college or university.  But the remaining 550k folks will actually be seeking jobs with work visas within forty-five days.  By the end of September, they will have issues and will be asking stupid questions over where the jobs are.  Did Doctor Frankenstein create a create to roam the countryside in an unhappy state of mind?

Third and final.....for every single one of the 800k folks....there's happy feelings.  I'm guessing that another 800k of folks who cannot meet the criteria.  You can guess here....they aren't happy.  Course, they can't vote.  But they can stand there and comment about the unfair nature to their relatives who can vote.  There should have been a broad stroke of the pen, and all of the campers covered.

I suspect that history will look back over this in a decade, recording it as a hasty directive by the President, without much thought over implications or the end result.
at Sunday, June 17, 2012 1 comment: