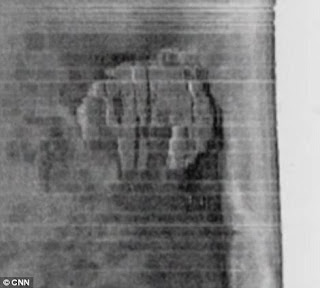 Months ago, out in the bay between Sweden and Finland....some guys had a radar bounce back with a fairly big chunk of "something".   This image is roughly 200 feet in a circular pattern.  They vowed they'd come back and dive down to check it out.

So, they've finished diving and have some odd comments to make.  First, it's a stone device, with absolutely no silt attached to it (it should have some).  There's some soot on it....meaning that it was used for some type of fire purposes.  The boys are fairly sure now....that it's not a natural thing.  And it's about 250 feet down from the surface. 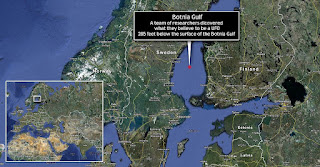 Well, no.  My humble guess is that around 50k odd years ago.....the ocean levels were at least 300 feet less than they are today.  This bay between Sweden and Finland?  I doubt if it even existed.  This was probably a valley area and a small lake lay about mile or two away.

What were the boys doing 50k years ago?  Well....they obviously had some stone-making knowledge, and a bit of time on their hands.  Maybe it had a special purpose.

So the guys who found this are still looking at the pictures.  I'm guessing over a hundred folks are now interested in this and willing to toss a couple of million into going down and doing a major "dig" at 250 feet under the water.  At some point, they are going to discuss the idea of bringing this thing to the surface.

I'm reminded of a British movie made in the 1960s.....Five Million Years to Earth.  Some Brits are digging around London and find this strange "ball" buried far down in the Earth.  By the end of the movie, it's become apparent that they never should have cracked up the stupid  ball.  For some reason.....I'm thinking whatever some idiots did 50k years ago....maybe there's a reason to just leave the "cork" there in the gulf between Finland and Sweden.
at Monday, June 18, 2012 No comments: