I kinda noted this week that the National Geographic Channel has gotten desperate enough....that they had to slip in and do a UFO series....entitled:  "Chasing UFOs".

Back around the election period of 2004, I had been a subscriber to National Geographic....for almost a decade.  They ran an entire magazine in October 2004....with every single article centering on global warming.  The hint by the magazine was....vote for John Kerry if you care about global warming.  I wrote a simple short letter to NG, and just plain said "enough", and quit my subscription.

I had been noticing since around 1999....that they were working hard to turn National Geographic magazine into some hocus pocus environmental cause.  It was no longer a serious publication on geography or culture.

The general response to my cancellation was that this was a business direction and that the management of National Geographic felt that they were going in the right direction.

So today.....while they won't fess up to it....they are fairly desperate to get just about any idiot to watch their channel, and even some show like "Chasing UFOs" is acceptable with NG.  My guess is that the profit margin over the past decade with both the magazine and the TV channel....are dismal in nature.  Management is probably at a point where they just might have to run up reports in National Geographic about Bigfoot, the Loch Ness Sea Monster, and Aliens.

My suggestion?  Just fire the top five management folks in National Geographic and start fresh with no push on the environment.  Just go back to plain geography and culture.....and let the magazine sell itself.
at Saturday, July 07, 2012 No comments: 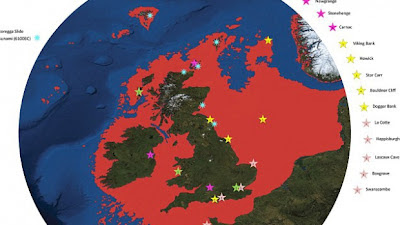 As you look at the map to the right featuring the UK....you notice this area in red.  The red signifies landmass that existed prior to 18,000 years ago, and how the UK wasn't an island, but actually connected to France and the Netherlands. And Ireland wasn't Ireland....it was part of the landmass of Europe as well.

This week, a team of smart guys (from several universities) finally got around to publishing what they've discovered.  The sea levels were much less than what you expect today.  Somewhere between 18,000 and 5,000 years ago.....the waters rose by roughly 300 feet.

You can imagine roughly ten thousand residents of "Doggerland" (the title given to this area) waking up and realizing the water is rising.....so they move.  A month later....maybe a year later.....the water is up to the front door again, and they move again.  Eventually, they are shut off and stuck on an island, and end up being British royal subjects in the end.

This idea of Doggerland brings up a number of topics if you think about this.

First, the UK can't be the only place affected.  Most of the Mediterranean Sea was likely less than what you see today, and Spain probably connected to Morocco.  Italy was probably twice as big as it today.  Cyprus likely connected to Israel's landmass.  The same can be said of India stretching out another hundred miles into the ocean.  Japan likely connected to Russia.  The list goes on and on.

Second, there are likely several major lakes that existed at the time....left over from the glacier period....which finally broke loose, and dumped billions of tons of water out, and eventually brought the water levels up three hundred feet.  Global warming at work?  Well....yeah.....you can't get around that topic.

Third, you can figure somewhere around ten thousand folks living out on Doggerland at that point.  They probably had structures and a society.  It's all sitting down three hundred feet below the surface now.  Are we finished with the water increasing, or will we one day be searching for an undersea city called New Orleans?
at Saturday, July 07, 2012 No comments: