Just two cents of thought on the Boy Scouts vote yesterday for a continued ban on gays within the organization.  It's their organization, and they can run it anyway they want.  If they wanted left-wing dictators from South America to run it....they'd approve the rule change and make it so.

So for the enthusiasts who get all upset and angry over this....just start a brand-new Gay Scouts organization which runs kinda like the Boy Scouts, and be happy with your own product.

If you think about it long enough and ponder upon it....it's like endorsing the idea of atheists being allowed into the Baptist organization, and actually becoming a minister.....maybe even the president of the Southern Baptist Convention.  That just won't happen.

So just start the organization and make the best out of the deal.  Maybe in forty years....it'll be a success. Maybe.  It's just not something that I'd be betting a lot of money on.
at Wednesday, July 18, 2012 No comments:

Could Have Been on Seinfeld 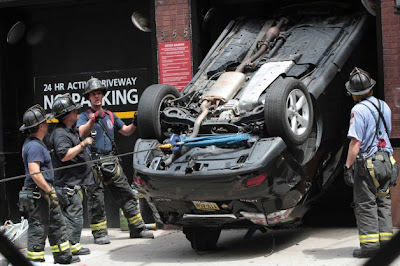 The story here is that a SUV was parked up on a higher floor of a New York City building, and had to pull onto an elevator....to get down to the ground.  Well....the elevator wasn't there....so it just went crashing forty feet to the ground.  No one hurt really.  Probably the end of this vehicle.