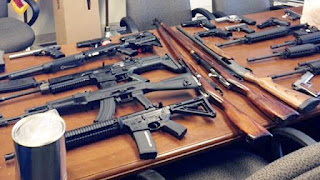 This week....up here in this neck of the woods of DC....we had two events where you had to ponder about the right prospective.

First, we had this guy over in Maryland who'd been fired from his job.  The boss had call him and discuss a situation....where fired guy came out and began to make various threats.  Direct threats.

Now, this all occurs on Monday morning.  The boss?  Well....based on every newspaper account....he doesn't get around to calling up the cops until Wednesday...roughly forty-eight hours later. They investigate.  And by Thursday morning....around 3AM....they come over to the house to apprehend the "joker".  The guy sits over at some mental hospital right now while doctors figure out if he's crazy or not.

The thing....there were twenty-odd weapons in the possession of this guy, and several thousand rounds of ammo.  Yeah, there were automatic rifles and such.

So the question is....once this nut made threats over to the phone to the boss on Monday....what happened over the next two days while he waited this out and finally felt the urge to call the cops?  Two days....just thinking about the threat?   Maybe the boss was a guy with patience?  You just don't know.  But he waited.  The nut could have come the first day, or even the second day.

You had to be there....I'm assuming....to have the right prospective.

Well....the guy on the side is asked by the postal clerk to step back up.  The old guy sees this, and freaks out.

A confrontation erupts.  The old guy whips out some four-inch blade knife and there's an attempted stabbing underway.  Somewhere in the midst of this....the postal gal pulls out a can of pepper spray and just goes to work on the old guy.  In the chaos....the old guy retreats, makes it to the car, and is later picked up by the cops.

Almost every single person who knows the old retired guy....a government service guy for thirty-odd years....swears up and down that he's a friendly guy and never the type to get hostile or upset.  No one can figure why he reacted the way that he did.   Other than someone jumping in front of him....there's not much else anybody can say.

Maybe the old guy had too much coffee that morning....maybe too much sugar. Maybe the old guy had a bad night of sleep.  You just don't know.  But the end result now is some prosecutor trying to put the old guy in prison for five years, and maybe some kind of federal charge on assault within a post office.  The sad truth is.....he might have just low on blood sugar and just got upset over mostly nothing.  And for that?  Jail time?  Like I said....you need to find the right prospective.
at Saturday, July 28, 2012 No comments: 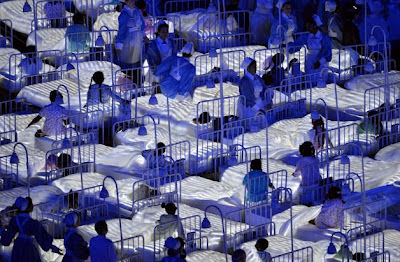 I'm really not into watching the Olympics anymore.  I can remember watching the 1972 and 1976 Olympics....maybe forty hours of each.  Over the years, I've come to view it as some kind "show"....rather than a sports event.

Last night came the opening night episode in London for the Olympics. I didn't plan on watching much of it....then came up this moment of the "show" where they ran out a bunch of nurse gals, with a hundred roll-around hospital beds.  I sat there and looked at this for about a minute, then turned the TV over to the History Channel.

This nurse and hospital bed thing?  Well....maybe if I were British....it'd make sense.  It seemed to be some bizarre artistic thing....that went beyond what a mortal guy could understand.

I'm guessing in the years to come....folks will refer to this Olympics....as the "bed show", and everyone will have a two-minute comment over what they got out of the bed display.  Personally, you would have been better off washing your dog, or asking your neighbor to repeat his Vietnam war story for the one-hundredth time.
at Saturday, July 28, 2012 No comments:

Dreams of a President?

Somewhere around mid-November....there's some election results which will come out.  It's hard to predict things but one of the oddball outcomes is that Romney doesn't screw up the election in the final weeks, and somehow President Romney enters office in January.

This would bring up this event that I can see coming.....where outgoing President Obama goes off into a 100-day exile....kinda upset over how his campaign faltered, and comes back with a book, entitled: Dreams of a President.

There'll be five or six speeches laid out that he would have given....if he had been around.  There might even be a 2013 State of the Union speech laid out in the book.

There will be a composite cabinet listing on how he would have changed or modified the entire cabinet....maybe bringing in some Republicans, retired generals, and even David Hasselhof as a Czar of Electric Cars.

There might be a composite story over how he brought the Jews and Arabs to the table, redone Cuban relations to make Cuba a buddy of America, and a list of fourteen accomplishments which allowed him to win the 2017 Nobel Peace Prize (the only guy to ever win two).

Then you'd notice the Today Show interviewing him over the book....almost acting like that it was all stuff that did happen but didn't.  The ABC folks would put up a full hour one night.....talking up the composite things that would have occurred....almost making you believe that it already did happen.  Some folks would start to show up at mental health facilities....reporting that they've started living in an alternate universe, believing that the composite events are all happening.

You'd be sitting out on the front porch....just shaking your head.  A bunch of fictional writing....taken to the extreme....and people acting like fools.  Don't that beat all.
at Saturday, July 28, 2012 No comments: