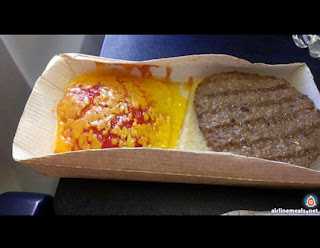 The photo is from a guy who was onboard a Ryan Airlines flight in Europe, and it's supposed to be a hamburger of sorts...priced at $6 roughly and you had to actually pay for the meal as part of the package.

I've been flying for over thirty years of my life, and probably taken near 200 flights.  The sad truth is...with the exception of one single flight....I can't remember any meals being worth eating.

I had the pleasure once of riding Air Lux out of Luxembourg....to Paris, and they served this terrific ham and cheese sandwich with spicy mustard and some extra crunchy chips.  I could have eaten three or four of the sandwiches....they were that good.

The plain truth is that you can't get decent food on any airline, period, and we ought to just accept that.  Toss in a Snickers and a couple of oatmeal cookies....and just survive off that and a Pepsi.

Some folks would like to just spend $10 at a restaurant in the airport and get a slice of pizza and a small cup of soda.  They'd be happy with that.  But the sad truth is that most airports wouldn't dare allow a decent pizza shop to open up and deliver good but cheap pizza.

During my travels with the Air Force on cargo planes....we'd always have a box lunch.  You'd typically get a baloney sandwich, a candy bar, some chips, and a Coke.  It was the 99-cent meal that was acceptable.  A guy could be happy with that....even if it was awful simple.

I would imagine if I talked to some guy who traveled a bit on Trailways back in the 1960s....he'd probably say the same stuff about bus terminals around America.  It's probably always been this way.
at Saturday, September 22, 2012 No comments:

Around two years ago....across the river from me in Maryland...was a murder.  A local school principal from Silver Springs, was murdered in his house.  For about a week, it was a big deal in the region....making the news every night.

In the end, the cops figure out that the guy was cruising around the internet looking for young guys to come over and have an evening of lust with him.  And one of these guys that he happened to hook up with.....ended up killing him, and bringing three friends over to rob the house.  We can say that the Maryland cops did a fine outstanding job in finding the four guys.

The problem was that a conviction situation was impossible....without making a deal or two.

So this kid....Joel Johnson....was brought to the side, and offered a deal where he basically walked off in a plea situation.  He would say enough to convict the kid who actually killed the principal.

Well....this week....Joel Johnson came up in the news.  He and an associate decided to rob some guy and his wife at their apartment in DC.  Joel and his buddy showed up and thought this would be simple.  In the midst of the robbery....the victim guy got wise and quick.....going after Joel.....and eventually a shot was fired, killing Joel.

I imagine that the first first cops on the scene ran the name....realized who the dead guy was, and just stood there in shock.  No one could really serve justice on Joel, because of the plea deal.  Joel could have wised up and gone off to do good things in life with this second chance.  He decided to screw up things....and ends up deal.

When you get second chances in life.....you usually make something out of the deal.  In this case.....Joel screwed up.

This week....I started to notice more people asking questions of management over the implications of sequestration.  I will admit....that probably over fifty percent of the GS worker force in DC.....has not paid any attention to the episode and has no idea what happens on 2 January.

Commentary from yesterday from several political figures indicate that they will likely whip into DC the week after the election in November, and simply put a 120-day delay onto this mess....allowing for more meetings in January and February.  They haven't yet said how they'd come to some real agreement on the budget....other than delaying the mess on 2 January.

How does it end?  My guess is that a mandated trimming of manpower will occur, with roughly three percent of the civilian work-force forced to retire or leave by the end of 2013, and repeat again in 2014 and 2015.

There's also a hint of furlough episodes coming down.  It might be....that you as a government worker....have to take an unpaid day off every month for all of 2013.  Maybe two unpaid days off.

New taxes on the public?  Maybe, but I wouldn't expect this to amount to very much.  Forget about the value of the new revenue....it'd simply go into another pot to pay the Chinese folks for being so kind to loan us a vast amount of money that we'd typically never be able to pay off.  So the extra taxes that your company pays.....will come out of some pot that they would have used to pay out bonuses to you, fix up the building, or take care of health care costs.  Only the naive believe otherwise.
at Saturday, September 22, 2012 No comments: