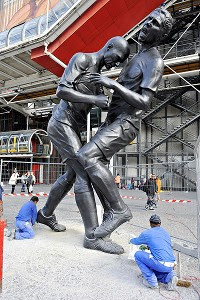 I never was much into soccer, until the World Cup came to Germany in 2006.  I finally sat down and over several weeks....watched a number of games and gained a great appreciation of the tactics and strategy involved.  I also came to enjoy the play of a player for the French....Zidane....who was in his final year of play.  He was destined to retire, but he was probably playing the best of his entire career....for the French squad.

So the French came down to the final minutes of the game, and there had been a fair amount of physical theater going on....and Zidane was tired of all the things that the ref's had failed to call.  So in one magical moment....Zidane came up and gave a head-butt to one of the Italian players.  He got caught....he was kicked out of the game....and the French lost.

The French have remembered the act that cost them the title of champion.  They still respect Zidane greatly.  This week, they finished up a giant-sized statue of Zidane giving his classic head-butt to the Italian.  It's hard to say it's tasteful in the art sense....but most French men remember the guy and admire him.

For years and decades to come....folks will come around and admire the statue.  They probably will discuss the great moments of this final game, and how Zidane finally lost his patience did what had to be done.  For a Frenchman, it was a brutal but honest moment....something had to be done, even if it cost the game and the championship.  So in this weird way....the French are remembering a moment when they lost something, but maybe gained something in return.  That's the French way.
at Thursday, September 27, 2012 No comments: