A Discussion on RF 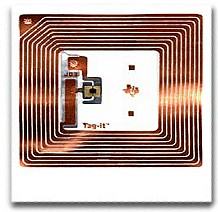 Ever since the first of October....if you were attend the John Jay High School and Anson Jones Middle School in San Antonio area of Texas.....you had to attend classes with this fancy Photo ID card, which happened to have a RF (radio-frequency) chip on it.  This allowed the school to track each single kid, throughout the whole day.

There are a number of issues and questions tied to this "test".  The school board is looking hard at this and whether to expand it out to all 112 schools in the area and affect over 100k kids.

The kids are mostly mixed on this.  A good number question the idea of tracking them throughout the day.  Parents are wondering if this is really necessary and what exactly it will prove.

You can imagine Johnny and Karl swapping cards and marching around to oddball places throughout the day, to be reported to their parents.  Do you punish kids for swapping cards?

Bogus chips infecting the system?  Well....an engineer could copy the RF signal on Karl's card and reproduce it....so that forty Karl's are walking around the school.

A jamming system developed and causing chaos?  A guy could walk into Radio Shack and buy the jammer parts....manufacture it in a couple of hours, and deploy it with Karl's help into the school.

I came from a mostly rural area in Bama, and even today....ninety percent of folks can barely operate a TV satellite receiver, or do anything beyond call or receive cellphone calls.  Introducing RF cards?  Most of my Bama associates would ask a hundred questions.  Eventually, they'd come to ask if you could RF-count cows?  Then the county agricultural store would have a dramatic fever on folks buying RF chips for cows.  In a year or two....farmers would then start naming individual cows, and giving precise information about weight and attitude on the cow.  This RF thing could take off.

When RF technology first came out....you kinda knew where exactly this was going to go.  You could track shipments, computers, cars, dogs, etc.  Tracking people....would round up the end of this mess.  You can imagine a small company of four hundred folks in one building.  The boss gets a weekly report showing you out of your office around forty percent of the time.  There'll be some column which notes bathroom time....where it might be noted you spent 66 minutes on average every day....in the bathroom.  Your payraise or bonus?  It might all in the end....relate to bathroom time average per month.  Eventually....some guys would start to have camper porta-potties in their office to lessen bathroom time, and it'd start to make companies rethink the whole RF direction.

Just some thoughts from the common Bama man.
at Wednesday, October 10, 2012 No comments: