There's two stories in today's news which gave me a few minutes to think and pause over.

First....out in Oklahoma....there was this guy on a motorcycle....who came around a corner....and there was a bull in the middle of the highway.  Black bull, of course.  This occurred at night....so other than a pair of eyes gazing at him....the motorcyclist probably had a 2-second moment to ponder what that was in the middle of the road.  The guy is in serious condition.  The bull?  Dead.  They didn't give the speed, but you'd have to think the guy was doing at least sixty there...with no lights showing around the road.

I'm guessing the farmer has gone out to view where the bull jumped the fence, and discussed things with the guys down at the local gas station.  The guys will ask where he bought the bull, and if he was a tough critter when he unloaded him.  Then they will ask how he handled the disposal of the bull upon daylight.  This always is a heavily discussed topic with local farmers.

Lawyer involvement?  Well.....yeah, there might be some lawyer trying to dump blame on the farmer for a weak fence or a difficult bull.  There's not exactly an insurance policy to cover things like this.....you know.

The second story?  There's a guy up in Union City, Tennessee....who the cops noticed him driving a bit erratic.  So they turned on the siren.  Now....you have to understand.....the guy was doing no more than 20 mph before the siren came on.  And after the siren came on?  He was still doing 20 mph.  So this chase developed.  The guy never got any faster than 20 mph.

When things finally got to a stopping point....the cops walked up and noticed that the guy was nude.  Naturally, this brings up the Bath Salts drug situation.  No real discussion here....the cops don't argue at all.

So he will be charged with several crimes....lewd behavior will be one of course.  Jail time?  I'm guessing the judge will note that he never got over 20 mph and likely limit him to sixty days in jail.

This makes a guy from Bama pause.  We don't get too many nude drivers around Bama, and this might be a trend which stirs up local Baptist folks a bit.  You'd hope that it only attracts guys....but I'm willing to bet that women end up in this situation, and it just becomes a big mess in the end.
at Wednesday, October 31, 2012 No comments: 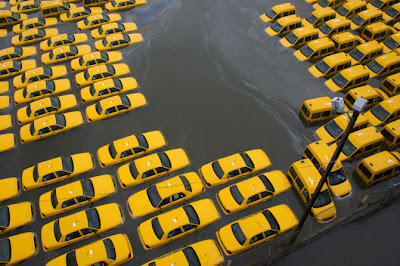 I sat and looked over Sandy damage in NY City, and there's this one shot. Taxis....under water.

Every single one of those.....have to be condemned, and dumped.  They ought to be crushed....but I'm willing to bet that trucks are going to be brought in and these will be repainted, and shuffled out to Mississippi or Alabama....to sell as cheap cars with high mileage.

The question is....would you spend $1k for a former New York taxi....just as a junker for a year or two?  A guy from Bama would pause and spend two minutes thinking about this.  It'd be hard to pass up the deal.
at Wednesday, October 31, 2012 No comments:

The National Parks folks have come around and finally admitted that sequestration....if it occurs on 2 January....will take out around 8.2 percent of it's current budget.  Their commentary?  Out of the 398 parks throughout America....they suspect they'd have to shutdown at least 150 of those parks.

I paused and pondered over this.  For the big-name parks...it's $25 to enter....per vehicle.  Doesn't matter if there's one guy in the car, or six.

Almost all of the parks will offer a yearly annual pass for around $40, which means if you live within a hundred miles....you could visit once a day for the twelve months.

Camping fees?  They all offer camping and it's generally $10 to $20 per night.  Lodge stays?  Well....at the nicer lodges, it's up around $150 per night (yeah, that's a shocker).  You want a cave-tour with a fancy-pants ranger?  That will run around eight bucks per person.  You want a soda at the grocery on the park? That usually runs around $2.50 per bottle (yeah, Wal-Mart sells it for 99-cents each).

Somewhere along the way, there's tons of money being generated within the National Parks system.  I will admit that Rangers and park employees make more money than what the standard was in 1976....but there ought to be point where profits support the vast amount of the park support.

So I come to this odd topic out in Arizona.  The state would like to take over the Grand Canyon National Park.  Hell would have to freeze over before the National Park Service would allow their crown jewel to slip away.  But the truth is....the state and local area around the Grand Canyon park now greatly depend on it's survival as part of their economic system.  People drive up to Williams and spend a night in the local hotel before entering the park and spending all day there....then end up in Flagstaff for their 2nd night in a hotel.  Gas and food?  Folks tend to spend at least $150 for their single day visit at the Grand Canyon as they pass through.  If they spend a week there....they will spend $1000 easily on the local economy.

What would happen if Arizona took over the Grand Canyon?  The park rangers would be let go and a newer team would likely arrive....working for twenty percent less than the current group.  There would be two hundred cabins erected around the park and folks would be charged $75 a night to 'camp-out' in semi-old surroundings.  The clean-up crews?  They'd be locals or from the local Indian tribe, and it'd be a contract deal.  A fancy restaurant or two would be added to the park.

Yeah, it wouldn't have that National Park theme that we are so used to....but the truth of the matter is that everything now has a cost.  We didn't think about that in 1977.  We didn't really care about the entry fee other than grumbling that $25 is a bit too much to pay for one guy in one car.

I'm not saying every single park needs to be turned over....but I think the National Park Service is about to face a serious reality...if sequestration occurs.  It might be time to accept some radical ideas.
at Wednesday, October 31, 2012 No comments: 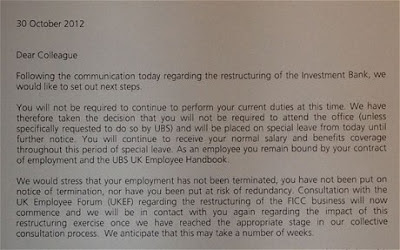 This is page one of a brief note to UBS employees who showed up this morning in London....to find out that they'd been let go, terminated, fired, or laid-off.

It's a nice letter....basically saying that you will not be required to attend the office anymore.  Yes, you are on "special leave".  You have become.... redundant.

You can imagine yourself.....looking at this letter on the big door to the building.  You check you email via your cellphone, and find this nifty note there.  You figure...what the heck....and go over for a number of ales at lunch, and spend the day with the other redundant chaps.

I sat and pondered over the note.  It's almost Shakespearean in nature.  You wanted to convey some awful harsh situation, but in a nice polite British way.  There are ten thousand UBS employees who will be made redundant.  I'm certain that few will find themselves back in the banking business.  There's just not a need for that many folks to fall back into a job.

The British have a way about things like this.  Stiff upper lip.  Hardy men.  Never give up the ship.  Being redundant.....is better than being laid-off, at least in my book.  Men might aspire to such a lofty position...such as this.  I could see a Peter Sellers movie being made out of this.....if he were still alive.  Maybe bring back Chauncey....to be made redundant.
at Wednesday, October 31, 2012 No comments: