Yahoo put up a story over the worst airports in America for flight delays.

At the top were Newark, San Francisco  and Chicago.  In most cases if you check the numbers....they all tend to get problems after 3PM.

This is a favorite topic of mine.  I've spent hundreds of hours in airports over the years.  I'd say the vast number of flights...seventy percent....ran on schedule and things worked out well.  There's probably a dozen flights where I either got totally cancelled, or my flight was three hours late in taking off.

I've learned three valuable lessons when dealing with the delayed situations.  First, you need to go and immediately find a pub or bar...to sip slowly down some brew.  Sadly, you will be spending somewhere around $8 for that single drink.  The truth is....you are trying to avoid aggravation in your gut.  Just standing there and fuming....will just make you angry and hostile.

Second....you need to get a newspaper and occupy your time instead of concentrating on the lousy service or the 1-star airline that you booked the trip with.  It's best to fume over Senator Bob and his lousy comments....than the airline or the trip.

Third....just something to remember....but the vast number of airlines and airports tend to run correctly from 6AM to noon.  You might want to start your trip early and take advantage of statistics.  I once showed up at a airport at 4AM, boarding at 5:15AM and got to my destination three hours later.  The neat thing about flights taking off before 6AM.....they rarely have more than half the seats full.
at Thursday, November 08, 2012 No comments:

The Little Guys Versus the Big Guys 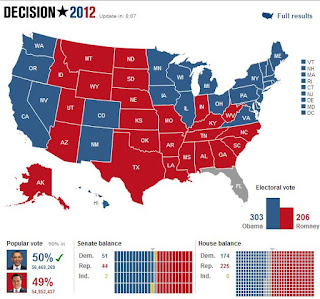 This is generally the map that you see popped up and gives you the big picture of what happened on Tuesday.

There is something more to the story that you have to grasp about how America works, and how it doesn't work.

We run the Presidential election by the electoral college.  It's simple...highly populated states have more electors....small states have fewer electors.  You need 270 to win.  You build your entire election....around the idea of getting state by state results.

A senate election runs in the same fashion.  You run strictly within your state.  Winner take all situation.  You don't care where the votes come from in the state but you need a majority to run. 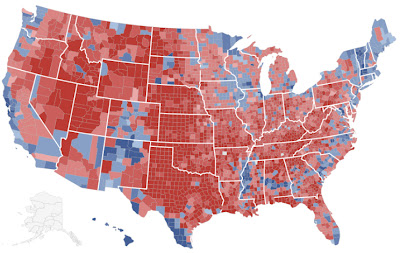 So we come to Representatives.  They have a unique deal....they merely run within a district or county area.  Someone takes a couple of counties and binds them together to equal one representative.

As you look at this second map that depicts county by county vote in America....the red counties are Romney counties and the blue ones are Obama.

You kinda start to stratch your head because the nation is mostly red, or so you think.

Then you start to look at blue areas and tag them to urban areas.  For example, the blue in Oregon represent Portland and Eugene....both are highly urbanized areas.  The rest of Oregon....voted for Romney....county by county.  The high population areas of Portland and Eugene....by a 54 percent vote....took the state electors over to President Obama.  The rest of Oregon, being mostly rural....could only mount 696k votes.  Because of the way they carved the state voting districts out....five of them....there's four Democrats elected as representatives and one Republican.  In their planning efforts, they chained up a fairly strong county area along the coast that would be siding with Republican votes, to another fairly strong Democratic base.

County by county....in rural areas....folks are trying to send a message, even if they are on the losing side of the stick.

Florida is another good example.  The urban areas of Orlando, Pensacola, and Miami carry the Obama vote....ensuring 4.1 million votes.  The rest of Florida....the lesser populated areas....gave Romney just over 4 million votes.  As you go county-by-county....you then realize that most counties in the state voted Romney.  Most of the voting districts in the state....go Republican.

So as the fancy-pants analyst sits on the CNN stage and says to you that President Obama has a mandate, and that Representatives in the House (especially Republicans) need to work with him because of his majority win....you pause and realize that the Representatives were sent by the non-urban side of America with a totally different purpose in life.  These voters know that they can't overcome the urban vote in Atlanta, Miami, Dallas or Eugene.....but they can send a message with a Republican Representative.

When the fight starts up shortly over sequestration and the Republicans refuse to budge on limited tax growth....prepare to hear some bogus talk about how they aren't working to compromise.  The truth is....they weren't voted in or sent to DC to compromise much....they were sent there to be a clear message about what the heartland believes with their heart.

Thirty years ago...Presidents worked state delegations.  If you needed more support on a bill...you went to a state delegation that had both Republicans and Democrats.  You would offer up seven or eight construction projects on national parks, military installations, and interstates within that state.  These would entice the mixed group to move as a state delegation to support a President's bill.  This President has worked mostly to ensure it's Democrat versus Republican...never a state delegation at work.  I'm guessing his administration has limited experience with the old methods of how the system worked.

And the Senate in this picture?  Just a bunch of old white guys who do interviews on CNN, ABC, and Fox News.  They occasionally approve federal judges and Supreme Court judges.  And they have approval over the treaty business.  Otherwise, their value in running America is fairly limited.

I know that your high school teacher never laid this out in a clean fashion to make much sense, and the CNN half-wit analyst really isn't worth $150k a year they pay them.  So settle back and ponder over how urban America and rural America have put things into prospective.
at Thursday, November 08, 2012 No comments: