I sat and watched a bunch of dimwits appear on various news shows this week....speaking out about how the Republicans must change....to win in elections.  Naturally, only by changing....can they win.  It was a comical theater show for the most part.

So, what dramatic Democratic character does the Democratic party have to replace President Obama in 2016?  Answer?  Well....they could try and bring Hillary back again.  She'll be 69 years old and it might be questionable if she has any real energy to go through this again.

This Maryland governor....Martin O'Malley?  He has favored Latinos and gays in the state, but he's also worked hard to chase millionaires out of Maryland.  Tax revenue by 2016 will be a serious topic in Maryland and no one will be able to entice the rich folks to come back.

New York governor Cuomo?  The Sandy hurricane business will be dumped on him as a failure within New York circles.

For the Republicans?  There's a fairly short list.  You can bet on only three candidates in the end: Marco Rubio, Paul Ryan, and Jeb Bush. Rubio is going to go out and be the number one choice of Latinos throughout America over the next four years.  It's hard to see him not being the winner in that election.
at Saturday, November 10, 2012 No comments:

There's an odd term that I came across this week, and I had to actually do some reading to grasp the meaning.  The term?  Key money.

Basically, if you live in a pretty high-scale area that has done rent-control....meaning that the landlord cannot raise the rent to any level he chooses....then there is an established control.  Everyone grins as they pay less than what the rent should be.  For the public, this works out great.

As time goes by though....you eventually discover a great place over in another part of your city or town....that is superior, and you'd like to rent this open apartment.  The landlord smiles and says that he's got lots of people who want the apartment.  The signal is given, and this bidding process is conducted....under the table.

You offer key money.  A bribe of sorts.

This is money that isn't written down and if you ever get upset about the deal....there's no proof that you ever paid the key money.  Naturally, key money is never taxed because it doesn't exist.

How much dos a key money situation cost?  Well....some folks hint at two months of rent.  Some suggest privately that it might go up to three or four months rent if you find a unique property.

The odd thing I find about this concept...is that a number of countries simply see this as a 'gift' to the landlord.  Nothing illegal....just a gift. 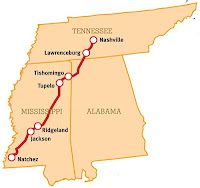 There is this 444-mile parkway that exists from Nashville to Natchez, Mississippi.....the Natchez Trace.  Few Americans will ever travel this route.  It's not a four-lane.  It's not built for speed.  No food shops along the way.  It's not even much of a shortcut, unless you had some plan to go from New Orleans back to the east coast.

If you lived back in the 1800 period....this was the common route that a guy would go if you had to travel from New Orleans to America.  The Trace was mostly a cleared way through the woods, and had an occasional roadhouse where you could have some stew and brew. 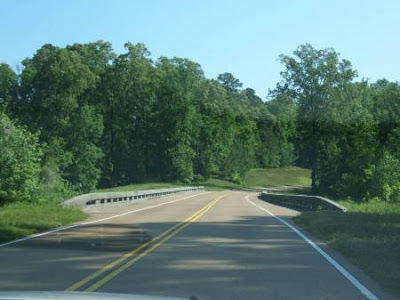 The Trace is an odd piece of American history, which serves today as a fairly relaxing drive.  You don't need to max out at 65....this is probably a drive that you'd prefer to stay closer to 45 and just enjoy the scenery.

About every twenty miles, you've got a picnic area set up and can sit for an hour or two....almost thinking you are back in the 1800s.

What you won't find on the Trace?  There's no commercial operations.  No gas stations.  No stores.  No restaurants   Nothing.  If you need food or gas, you have to exit the Trace and go local.

There's only three routes in America that I strongly encourage people to go and take.  The Natchez Trace is one of the three.  A guy could wrap up the Trace in one day, but I'd strongly encourage you to stop and enjoy the scenery ....breaking this up into a two day trip.  Your blood pressure will drop by ten percent and pause to ponder over how things worked two hundred years ago.

There are several odd things to ponder.

First, this gal is Paul Broadwell, who is some bigger than life research writer.  She's a West Point graduate who went onto various education experiences and you might consider as a intellectual of sorts....molded around the Army world.  She grew up in Bismark, North Dakota....ranch territory for the most part.  Married, with kids.  The folks who generally paid her bills over the last decade?  The New York Times and Boston Globe....two newspapers that wouldn't usually care for 2nd-rate journalism but they don't want glossy military heroes either.

Second, it's hard for a general or the head of the CIA to go out and conduct a secret affair.  You have to consider the atmosphere and people around you.  At the very least....ten people had to know that Patreaus was having an affair.

Third, timing is mostly everything.  Patreaus was supposed to be called up next week to explain Benghazi, and I'd suspect that he has some thoughts that might counter what the White House would like to say.

Fourth, at the heart of this episode.....the FBI is checking out Ms Broadwell because they think she had access to classified information.  It could be that some FBI agent simply put one and one together....realizing that the General had some relationship of a deeper nature.

Fifth, the reason for the FBI checking her out?  There is some speculation that she had a password to the Director's private email account.  Days spent gaining his trust...he slips one day checking his email in front of her, and she gets the email password.  She probably spent weeks and months cruising through his email....looking at various juicy pieces of gossip.  She probably wrote an article for the New York Times and drew the attention of the FBI, who sat and traced the whole scope of the article back to her and the nifty password that she had.  All compliments of the director.

Sixth and final....all of this comes days after the election?

Something smells funny about this deal.  The sad thing is that the media gets all peppy over this story, but hasn't uttered Benghazi at all.
at Saturday, November 10, 2012 No comments: