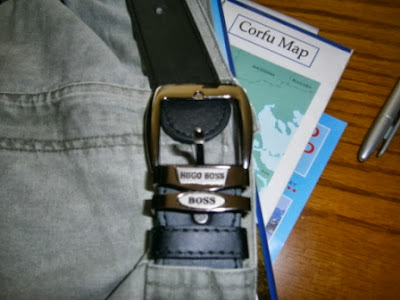 I'm not much for fancy clothing or designer stuff....mostly because I'm from Bama.  A guy grows up in simpler surroundings, and feels like an idiot if he were to buy a $100 shirt, or a $300-pair of Italian shoes.

I went off to Corfu and one of the odd things that I allowed myself to buy...was some rip-off fake Hugo Boss belt.  At fancy stores in DC....this would have been $50.  I bought this Chinese-made Hugo Boss-man belt for five Euro ($6 roughly).

Course, I was sitting there on the plane and flying back into Frankfurt with the belt on....when this odd thought hit me.....what if the German customs guys stand there at the baggage area and note my fake belt?  I would feel pretty idiot trying to explain my fake but expensive-looking belt to the customs guy.  So for around an hour there....as I'm going through the airport, and getting finally to the luggage area....I've got these worry issues.  Nothing happened and I proceeded on.

To be honest, I've come to realize after two weeks that this is an awful cheap belt and I doubt that it last a year.  But for a couple of bucks, I guess it's worth it.

A Bama guy in a Hugo Boss belt but cheap Wal-Mart jeans?  Yeah, it just doesn't match up.
at Wednesday, September 25, 2013