My Favorite Meal As a Kid 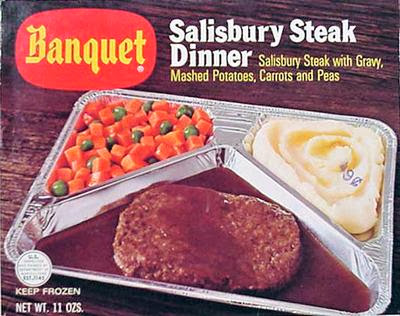 At some point yesterday, my wife challenged me on my favorite meal as a kid.  I sat....long and hard....pondering upon the choices, and in sixty seconds....I noted the Salisbury Steak frozen TV dinner.

Growing up in Bama....around 1970....the grocery operation came to offer TV dinners.  My mom picked up a couple and tested them on the family.

I came to have this passion for the Salisbury Steak tray.  In a normal year, I'd imagine that I had this at least twenty-five times.

Yeah, it was loaded with sodium and fat.  The steak?  It was a one-star piece of meat.  I remember the tray from that period having some kind of cherry tart on it for dessert.

So for roughly seven years.....I ate these.  In August of 1977.....I left home and joined up with the Air Force.  Their chow-hall operation fed me for the next couple of years, with mostly oddball food, grilled ham and cheese sandwiches, burgers, and four-star breakfast offerings.

To be honest, I haven't had a frozen TV dinner of Salisbury Steak since July of 1977.  Today?  My wife would jump into some sixty-minute lecture on nutritional aspects and 'chemicals' if I attempted to put one of the TV dinners into the shopping cart.  She's memorized at least five hundred 3x5 cards on proper diets, balanced eating, and evil foods.  She kinda sat there in shock over my favorite choice of food as a kid....thinking I would have picked roast beef, hot-dogs, or stew.

The odd thing?  The Salisbury Steak guys have been around for five decades now, and basically.....I doubt if anything has changed or improved over the years.  I'd like to test one of their meals....just to be absolute on my comments.....but I've got this gate-keeper to prevent such things.
at Saturday, December 07, 2013