The Add-on to the Arlington Cemetery 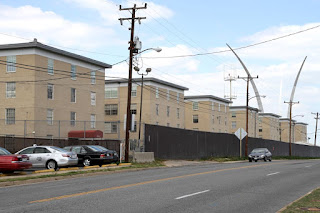 Down the street from me....on the way to the Pentagon....is (or was) the old Navy Annex.  You have to pass it each day as you ride the bus into work.  Back in the early 1940s....it was built to be a warehouse operation.  Then it was needed to be an office complex.  Around ten years ago....a discussion came up over renovation.  To be honest....it would take a heck of a lot to fix up the building and make it modern.

So this discussion came up and went into circles.

After the Pentagon, this is the most recognized building in Arlington.  A huge complex....all connected.

Along came the Arlington Cemetery folks, who kinda admitted that they were starting to reach maximum capacity.  At the present rate....they probably have around ten to fifteen years before it'd have to shut down and accept no more burials.

The Navy sat and thought about it, and made this decision to give up on the building....dismantle it, and hand it to the Arlington Cemetery.  Over the last month....the tearing down has started.

The Cemetery folks won't say how many years this adds onto their operation.  I'm guessing this is around fifty to sixty acres of total property (with the two parking lots included).  It probably adds at least one more decade onto the life of the Cemetery.

This won't make national news, and just barely even makes the local news.....but in some ways....it's a fairly significant change in the landscape of Arlington. And it ends the life of a complex with a fairly decent future use.

After watching a Sunday morning political chat show yesterday....I got to a point of asking myself....who exactly is wealthy?  Well....this turns up at least a hundred different interpretations.

In Red Bay, Bama....if you own a double-wide, have three cars in the front yard (all less than five years old), and make $40k a year....you are wealthy by local standards.

In Atlanta, if you own a $250k home, have two cars (one is new and one is seven years old) and make $48k a year....you probably aren't wealthy by local standards.

In Arlington, Virginia.....if you own a $500k house, have two cars (both are new), and make $120k between the husband wife....you probably aren't wealthy by local standards.

For CNN International News.....if you are the number four news person on the staff, and make $250k a year in Atlanta.....you don't consider yourself wealthy.

For Channel 8 News out of Tulsa, if you are the number one news person for the station....you likely make $85k a year, own a $200k home, and comfortably agree that you are wealthy.

In rural Bama, if you own a farm, own a Lincoln Town-car (recent model), take the wife on yearly trips to Aruba, have 500 head of cattle, own three tractors, and pull in $75k a year after taxes.....you consider yourself to be wealthy by local standards.

Journalists try to confuse us....with some national standard for wealth.  The truth is.....wealth is something that you just can't put a label on and say this is wealth status and this isn't.  That's why this whole argument over taxes was mostly bogus.
at Monday, January 07, 2013 No comments: