First, some guy decided to dress up in priest clothing and actually was able to enter the Vatican with the hundred other Bishops as they discuss the replacement strategy for the next Pope.  He got past the initial security, and it's a bit later when the Swiss guards wake and toss the guy out.

You can imagine this scene.....none of the priests have special ID cards or entry passes.  For a thousand years....they've never been necessary.

A fake priest?  Sneaking in?  Other than getting some free booze and sandwhiches.....I'm not sure what else you would have gotten.

The thing is....this guy could have gotten through the first day and got buddy-buddy with a dozen priests.   The second day....they would have walked him in with no issue.  "Larry" would have discussed matters and suggested various strategies....which might have amazed the big guys at the meeting.  "Larry" would have been thinking outside-of-the-box, by their understanding.

A week or two goes by, and "Larry" is now totally accepted.  Free food, free beer.....you couldn't ask for a better deal.

Then the day would have come when all the boys decide that "Larry" is the best choice, and suddenly vote him in as Pope.  "Larry" would have been shocked, and then looking toward the exit door....trying to figure a way out of this mess real quick.

Second?  Word is out that the Today Show is all screwed up and they are marching toward this idea of replacing Matt Lauer.  Course, you will remember that Matt got a new contract last year, and everyone was all happy over keeping Matt.  Then later, they kinda remembered that their viewing audience is shrinking and Matt is considered more of a problem than a solution.

The problem is....who replaces Matt?  And then....because of that silly contract business....what the heck do you do with Matt?  Make Matt be an actual reporter?  It just isn't going to happen.  Giving Matt his own show?  Just won't happen.

NBC is mostly screwed now.  A loser show, and virtually no way of handling Matt.
at Tuesday, March 05, 2013 No comments: 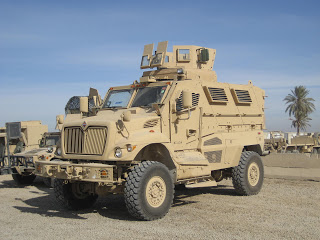 Back in the midst of the Iraq war....with tons of roadside bombs going off....the Pentagon determined that it needed a vehicle that would safely get their guys from point A to point B....alive.  It needed to be a truck vehicle....not a tank.  It needed to have room for a dozen guys in the back.  It needed to survive some pretty rough treatment.

So they invented something out of nothing.....the MRAP.  They bought several thousand of them.  They run around $500k each.  They do a great job of keeping solders alive when traveling from point A to point B.  No, it's not an assault vehicle.  No, it has no cannons or fancy weapons.  It just has tons of armor and would survive a landmine hit on the undercarriage.  For that, a GI would say it's worth the $500k each.

Somewhere in the midst of events this past year....the idiots at Homeland Security decided that they needed these.  They bought three thousand of them.  You don't want to do the math on this....because it's a serious amount of money....thrown into the wind.

What are they getting?

Well....this is a vehicle with a high point of gravity.  That means that you will survive a land-mine episode.  Course, we don't have many land-mines in America.  This means if you are traveling at 55 mph (top speed for the truck)....and make a decent turn at some intersection....it'll likely flip over.

It'll also flip over if you are traveling at a good speed (say 30 mph) and hit a high curb.

They generally require communications and this means that you have several antennas on it....and while a tall vehicle....the antennas will hang taller than usual.  So when you hit an low-lying electrical line.....you might get a decent dose of electrical voltage.

At around three to five miles per gallon....you can figure one decent drive for the morning will burn up $200 of fuel very easily.  Larry, Bob and the local cops go to some big episode out in the suburbs?  Well....someone needs to refill on the way back home that afternoon.

A vehicle made for urban areas?  Not really....it's more for open roads.

A vehicle for breaching a house, fence, barn?  No....it's made to drive Larry, Bob, and the local cops from point A to point B.

Spare parts issue?  Anything that breaks for the first year or two...is covered by warranty.  But this is a vehicle that will eat up your operations budget after three years.  You can figure at least $10k of parts being required if you drive a fair amount.  Most agencies will realize this and limit it's use later to only really important events....mostly for show, and little else.  It'll be in town parades....just to show off their toy.

Waste of money?  Yeah.  You could have bought a Chevy van to get the cops from point A to point B.  It would have delivered everyone safely.  If you were looking for a tank?  Well....it's not a tank.  This is why the government is going bankrupt....buying toys for the "kids".
at Tuesday, March 05, 2013 No comments: