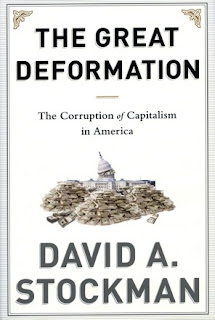 There's an interesting article over at the New York Times today, written by David Stockman (former finance adviser to President Reagan), over his upcoming book (to be released in the next week).

In simple terms....what he lays out is that the US...over the last eighty-odd years....has screwed up capitalism, and we are within years (maybe three, maybe six, maybe even ten)....of a massive economic downturn that would even make the 1929 Depression look pretty good in nature.

The US economy, even without Stockman's analysis, is functioning in various ways that don't make sense.  Major companies operating and making billions....yet paying no taxes.  Political games which translate into taxation revenue being used to "make people happy". A lack of sense when it comes to the future of the economy.  Toss in boy-wonders who develop some IT platform that basically just shows your picture and a few comments, yet makes billions off of mostly nothing.

A massive fall?  At some point, a few gifted people will make some public observations about the total failure of some political finance situation, and within weeks.....we'd be a four-star Cyprus situation....with no fool of a nation prepared to save us.  Saving ourselves?  Only if we grabbed everyone's wealth....and even then, we'd just prepare to destroy ourselves in a secondary sort of way.
at Monday, April 01, 2013 No comments: