The Question of Citizenship

It's a simple story to tell, but it's difficult to imagine where this leads onto.

There's this big-named California Democratic Party member.....Bob Wieckowski.....who is pushing an interesting bill for the state legislature.  It would open up this concept of who can be on juries in California.  Up until now....in all fifty states.....you had to be a US citizen.  Bob's idea?  Non-US citizens on California juries.

So you sit there and imagine some scenarios.  You get into some trouble.....maybe assault from some bar where you accidentally clobbered the bouncer for saying something about your ethnic background.  You walk into court with a $2k a day fancy-pants lawyer.  About an hour into your case, you suddenly realize that two members of the jury picked for the case....aren't American citizens.  One gal is from Mexico City and been in the US for eleven years.  The other is a Chinese guy named Wong who has a working knowledge of English, but been in the country for less than six months.  You start shaking your head, and your lawyer is all negative about this.  You'd like for the judge to stop this case, but the dimwit has to obey state law and your whole case is questionable.

The folks who wrote the Constitution over two hundred years ago....couldn't have imagined a case where non-citizens were part of the judicial process.

What stops the state from bringing in non-citizen judges?  That would be the next logical step.  The California state police force made up of ten-percent non-US citizens?  The state prison system run by a manager who is a Russian citizen?

At some point, your line of questions will start to confuse things even more.

Course, here's the sadder point.  These non-citizens might be more competent to ask stupid questions and have a higher expectation of what ought to be handed out as punishment.  And they might have actually watched two thousand hours of Matlock, Perry Mason, and Murder She Wrote while in their home country.

Heck, at some point, we might even learn that we had a non-citizen President in our midst and didn't even know it.
at Sunday, April 28, 2013 No comments:

Not that I really care....but I've sat and watched commentary from the three Tsarnaev family members who all had reactions to the two young gentlemen in Boston.  It's a pretty wide split on their words and beliefs.

First, dad....all soaked-up in passion and disbelief.  He can't understand any of this, and just says over and over that neither son was into fanatic Islam.  I've seen enough to believe that he's convinced of this.  Commentary yesterday indicated that he's in a hospital or clinic right now with significant stomach pains. I'm guessing that he's got some bad case of an ulcer.

Then there's mom.  She comes across as a nutcase who is extremist in nature and I think the only true Muslim of the whole family.  Her interviews....her comments....all make him think that she knows more and probably encouraged the son to be religiously active with the jihad folks.  There's no sorrow in her voice or character....with the one son dead and the other permanently in prison.  You'd expect some tears and weeping....and you just aren't going to get that out of her.  That's the odd thing.

Finally, there's the uncle who lives here in Maryland.  I get the impression that he's the hardest working guy on the face of the Earth and has pretty high expectations out of his relatives to abide by civilization and it's rules.  Every time he speaks....he's pretty much hyping up the fact that he's living in the greatest place on Earth and could not be happier anywhere else.  His first public commentary over the two punks?  "Losers", and he emphasized that to the ninth degree.

So you are left with an oddball family.  Someone is going to eventually write a book on them....but I just can't see how you get to a "truth" with this family.  Something about all of this just doesn't fit.
at Sunday, April 28, 2013 No comments: 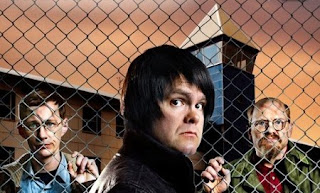 One of the neat things about riding Iceland Air (my trip this past week)....is that you get to watch Icelandic movies and TV shows as part of their video program.  So I finally had a chance to watch three episodes of the Prison Shift....a comedy series.  I doubt if they made more than ten episodes of the series, and they usually run for about 23 minutes.

There are these three losers from Iceland, for varying reasons....have made it to an Icelandic prison.  One is a half-wit guy who seems to bumble his way from one episode to another, and has now found prison to be a wonderful life (no taxes, free food, comfortable bedroom, free laundry, free mail, etc).  The second guy (Daniel) is stressed out over just about everything and would be smoking weed five or six times a day if they offered it to him.  And finally, there's the communist....a character who ought to be some Latin American dictator, but instead runs the hallway in his section and wears a prison-guard-like uniform mostly because the management guys don't have a rule that really stops him from looking like them.

I admit....it's all in English sub-titles, but if you have the chance to get the DVD of the series....Prison Shift.....get it and enjoy some old fashioned humor....with a Icelandic slant on it.

An Observation or Two

After a week off....I returned from a trip to Germany.

Just some observations.  When you walk through immigration for the EU....either in Germany or Iceland....there's no stupid paperwork like you have in the US.

How long does it take to stand in line in Germany or Iceland?  I've never stood for more than fifteen minutes ever.  Today....it was almost an hour here at Dulles....with only four stations open for 500 US citizens to pass through.

The luggage cops?  Here in the US....I stood there for three minutes waiting in line with my bag and that stupid declaration form....to get out of the affected area.  In Germany?  There's rarely ever a customs guy there, and they've already done their home-work....picking you out from the various cameras.

Could we fire half the Customs guys in the US? Yes.  It wouldn't take that much effort to build a scanner box....that you step into....scans your fingerprints and the passport barcode.  It could even pose five stupid questions, and get answers to make the system happy.  We could let three thousand of these guys go and find other work.  Why won't they make the move?  I suspect that the Feds are hyper that computers would start replacing everyone

What do most Americans think after having run off to Europe?  That would be an interesting thing that Congress ought to ask.  But I suspect they don't want the answer.
at Sunday, April 28, 2013 No comments: