It's an odd story.

Across the river from me....lies DC.  It's a six by six mile district, roughly.  People would generally be shocked that there's 230-odd parking enforcement officers....basically ticket-writers....that wander across the district seven days a week.

You can do the statistics, but that's a lot of folks for a thirty-six square mile area.  How much do they clear in a year?  The local news folks will tell you around ninety-million in parking fines a year.

Well....the city council is up to this fresh new idea....bring in another 30-odd parking guys, and get almost up to 270-odd folks.  They'd likely bump over the one hundred-million point.

A money making venture?  Well....you just don't want to suggest that around the city council.  They are all about enforcing parking in the district.

To be honest, there just isn't adequate parking.  I would imagine that there are around fifty parking garages spread through the district, but it's nowhere near enough.

So by the end of 2013, we will have 270-odd folks....men and women....walking through one of the most dangerous cities in America....to bring fresh new cash and capital into the city revenue pocket.  A hundred million is an awful lot of money....even I'll admit that.  As for irritating more people?  Well....the district doesn't care.  And that tells the rest of this story.
at Friday, May 10, 2013 No comments: 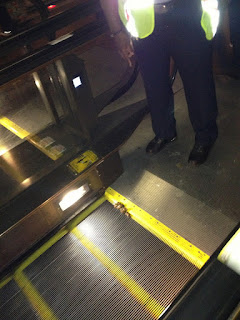 This is DC, and DC is one of the most unsanitary places on Earth to hang out.

What you see in this picture....is a shot from "Wes" that went onto a DC Metro blog site.....from one of the tunnels in the Metro system....some guy took a crap while on the escalator.  And it's gotten all up into the system.

You can imagine this kind of episode occurring on a daily basis....either urine or crap.  You as the repair guy....wearing the fancy gloves but it doesn't help much.

My humble guess is that we have a minimum of two hundred nutcases who just wander around DC....doing their business where they feel like it.  Cops won't say much, or do much.  I was down at some statue site in DC in 2011....and noticed crap at the site.  It wasn't left there by a dog....it was human stuff.

In all the years I was around Frankfurt....you just didn't have stuff like this near the public travel system.  In DC.....if you stuck with the Metro sites....I think you could find three or four examples every day.  Each evening....I assume some guy comes along with a hot-water hose and sprays down the area, and we start fresh the next day.
at Friday, May 10, 2013 No comments:

It's hard to be the chief of the Air Force right now.  Day after day....episodes occurring.  The latest?  Well...inspection guys came out to Minot Air Force Base.  There was a complete inspection of the nuke missile base (ICBMs).  Over the past year....the inspectors had gone to three other bases apparently, and passed them....all better than average.  Minot?  Marginal.

This all upset the leadership of the base, and in the past ten days....they sent at the issues that triggered the marginal rating.....seventeen missile control officers.  These are the guys who train to go down in some massive hole....sit on a twenty-four watch....and basically wait for a coded message from the President to twist two keys (simultaneously), to launch nukes onto someone.

The email that started this?  Some commander simply wrote that there is a "rot" that has set in upon the unit.  Folks aren't reporting on each other for violations....folks don't respect rank....folks question the orders or directives handed down by the leadership, etc.  So they suspended the seventeen guys from the one-hundred-fifty-man group.  They didn't say really how long....but I'd guess it would be four to eight weeks while they 're-educate' the seventeen officers to meet their mission.

Now, these aren't enlisted guys.....these are guys who did four years of university, and then officer school, and even missile officer school.

The big deal on missile officers?  It's a dead end.  You basically agree to go out there for three-to-four years....to a remote part of the US.....locking yourself into a dead-end job of just being a key-turner.  There's the twenty-four hour shift, which invokes leave being planned not just weeks, but months ahead.  And the only bonus?  Tons of time and lots of money for your master's degree or PhD.  You can spend hours and hours in the hole....writing your reports, or studying for the next exam.  That was always the selling point.

I suspect that someone in the base chain of command really wants to punish the seventeen guys for the marginal grade given.  The real punishment now?  The seventeen guys are likely consulting with a lawyer and trigger some events that will unravel this mess.  On the other side of the coin.....with the seventeen out of pocket now.....every other member of the unit is likely pulling one extra shift.....maybe two shifts more a month.....and leave is cancelled for some folks.  The Air Force won't talk about that, but it will be the case.

All making for a hostile atmosphere....well....yeah.  But don't bring that up, it'd be whining, and that'd just make for more 'rot'.

Selling a tour as a missile control officer just got pretty tough.

So Secretary of  Hagel now wants the whole story.  I would imagine that some people are sitting there and know how this mess started, and really can't figure out a good way of explaining this.  They didn't fire the seventeen guys.....they just wanted to impress upon them the fine art of passing an inspection.  The suspension business and the rot?  It's hard to say how this falls in the end.
at Friday, May 10, 2013 No comments: