A Brief, Ever So Brief Moment of French Excitement

To be honest, I don't think I've ever watch a tennis match.  Maybe two minutes here, or a minute there....but there just isn't much for a guy from Bama to get excited about, with tennis. 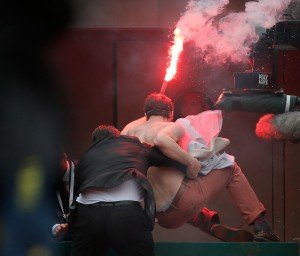 Today?  Well....maybe, it got hectic with the French Open.

Some French dude jumps out of the stands....whips off his shirt....lights up a flare...and runs across the tennis court.

Based on watching the video....it probably scared the crap out of most folks in the stands.  Even the players on the court took cover and probably thought it was a jihad thing.

The cops?  Well....the special guards of the court (in fancy suits and ties)....grabbed 'Frenchy-Joe' and hustled him off the court.

The best that the TV guys will say is that he was a for-gay marriage protester.  How this all fits into tennis or national politics....take your own guess.

How many French folks care about tennis and would watch this stuff?  I doubt if more than 200,000 French folks were watching it.  Half of them probably thought the guy had a stick of dynamite and were thinking it'd go off.

More of this kind of stuff?  Well, here's the thing.  Tour-de-France is just around the corner, and it is the biggest five-star circus in France.  So folks within the security apparatus of that....are likely shaking their head and wondering how the heck to handle it.

A guy from Bama would likely respond to have someone around with bucket of moist horse crap, and dump it on the guy as quickly as possible.  Things might be interesting to watch the bike race now.
at Sunday, June 09, 2013 No comments:

"When the state has the capability to know everything except the difference between right and wrong, it won’t end well."

It's been a lousy week for the President and his staff.  This whole PRISM thing, the telephone data collection situation, all of our emails collected into some massive pit....the list goes on and on.  Folks in the White House are furious that this all got out....so they've started yet another secrets-investigation.  You can already call it PRISM-gate.  Some guy put the secret stuff out to the Guardian.

This investigation will have an odd way of progressing.  You need to have a list of all the Guardian reporters.  My guess is that NSA has already gotten that list.  The British secrets guys might be furious about this, but it's already done, I suspect.

So they are pumping in these numbers from the office and the homes of the Guardian reporters, and looking for a call from a stateside location.  Using the mighty powers of PRISM, they will whittle this down to forty Americans, and start looking at their professions.  One by one.  It'll take a week....maybe a month, but some guy in Virginia (my guess) will be having a federal team at his door, and a warrant to grab anything in the house for the investigation.

Next month....two or three hostile and angry folks will provide more juicy stuff to the Guardian.  Another tirade by the Administration....more 'gates' and more investigations....then some point where a federal judge finally stands up and implements a cease and desist order on the Administration.  And in a moment that no one has ever seen....the judge likely appoints a special prosecutor with authority that no one ever dreamed.

To be truthful....our only protector of the Constitution....is a lousy piece of paper.  There are no men standing guard over the Constitution, except for perhaps the legislative process or the federal judges.  I doubt if Jefferson ever thought you'd need a Wyatt Earp or Sergeant York to protect Americans and their rights.

Sitting around house this weekend are one hundred Senators, and four hundred-thirty-five Representatives.  All wondering if their numbers are collected.  Wondering if someone they talked to six months ago is under investigation for something and the note of this Senator's 18-minute chat comes up as identified with the suspect party.  The investigation team then checks through the 1,631 calls that the Senator made over the last year and who he talked to.

Connecting the dots.  A child's game.  Played by adults in this case.  Motivated by?  A child only plays for the fun of it.  Maybe adults do too.
at Sunday, June 09, 2013 No comments:

Email ThisBlogThis!Share to TwitterShare to FacebookShare to Pinterest
Labels: PRISM, the Guardian

It hasn't made page one news, or been discussed nationally....but with elections coming up in November of 2014....we've got this interesting episode developing up in Tennesesse with the Senate race.  Senator Lamar Alexander.....is the favorite to win, and there's hardly any Democrat with name recognition or money to run against him.

So, out of the shadows....there's Glenn Jacobs who has announced that he's reviewing his options and might just run.

Glenn, isn't a Democrat.....he's a Libertarian.  He's got a fair amount of issues with Lamar, and Tennessee has a fair number of people who just aren't identifiable with Democrats or Republicans.  Maybe more than any other state.

Course, you sit and ask....who the heck Glenn is and why he thinks anyone would vote for him.

Well....he is recognized throughout the entire nation.  If you asked any kid between 15 and 20....at least forty percent know Glenn.  Go and ask folks around Tennessee....he's actually more recognizable than Lamar.  I'd take a guess that fifty percent of the folks in the state can identify him from TV.

Now, I realize that in the real world.....a wrestler doesn't amount to much.  This ought not be much of a threat against any legit Senator.  But there's this funny side to wrestling.  All of these modern-era wrestlers are orators and have developed a four-star ability to speak at a microphone....without a speech written out or reading off a teleprompter.

Put "Kane" against any of the Senate crowd....even John McCain, and "Kane" would tear them up in five lousy minutes.

So this is a curious event.  Most of us don't reside in Tennessee and wouldn't care.  But if you hinted it was "Kane" against just another idiot Republican.....well...that might be worth watching.

Finally, it just makes me wonder....where is the Undertaker (Mark William Calaway), John Cena, and "Stone Cold" Steve Austin?  We might have some other Senators who need to be run out of town.
at Sunday, June 09, 2013 1 comment: