Today, an Icelandic businessman....who does a bit of business in China....is prepared to have one of his aircraft carry the former NSA guy to Iceland.  The course?  Well....it'd leave from China, and cross over the North Pole and land in Iceland.  The possibility that the US might try to force the plane to land in Alaska?  It hasn't been mentioned yet, but it might going through the planning stages.

The talks with the Icelandic government?  Ongoing....is all that will be said currently.

What should Snowden expect?  Hong Kong is fairly modern and with a lot of convenience.  Iceland.....perhaps a step over the modern line, and more limited on convenience than you'd like to admit.   Nothing is cheap in Iceland, and jobs are mostly on the scarce side.

What would Snowden do for employment?  This would be a curious thing.  Maybe a tour guide, or some IT expert.  I'm guessing that he will attract a lot of NSA interest and every single network leaving Iceland....will be monitored.

Off-time?  Well....you'd go down to the pub, have a beer with the same crowd who was there yesterday. Iceland is a fairly small country.....with only 322,000 folks.

Traveling?  Well....that won't be part of the scheme....because every other country in Europe will be prepared to receive you, and flip you to the US government.  So you will be staying in Iceland for the rest of your life.  If you had traveled around to the country and knew what the heck you were getting yourself into....it'd make sense.  In this case?  No....there's no sense to it.

I'm thinking....after twelve months there....it's going to be hard on an American guy to just accept this small island as your retreat.  And there's virtually nowhere else you can move to.
at Friday, June 21, 2013 No comments:

Two weeks ago.....there was a brief discussion publicly by this Snowden character from NSA.....who wanted to maneuver himself from Hong Kong to Iceland.

Well.....we've kinda found out now that WikiLeaks has been engaged on this and trying to arrange this deal where Iceland accepts him and will not hand him over to the US.

Some insight that you ought to know here.  Iceland used to have a US military presence....from WW II to the middle of the Bush-era.  At some point, with hostility brewing on the isle from the locals over the Iraq war....the US decided that they didn't have to be in Iceland.....and pulled out ninety percent of their personnel.  Other than a small naval presence....there's nothing much there.

After we left Iceland, there was a bit of a long period where the money spent by the Americans was noticed.  It wasn't a terrible thing, but they did get to notice how it influenced the activities around the island.

Then in 2008....with the economic crisis in full-swing.....the banks in Iceland failed miserably.  The current recovery phase....would best described as ongoing and could take several decades before everyone can breathe a sigh of relief.

Tourism is now key to the survival of the island, and they are making every effort to attract people for a couple of days to a couple of weeks.

Would Iceland decline Snowden?  At this point, there's nothing much to lose.....but there's nothing to gain either.  You end up with mythical character around the island that everyone knows on sight. 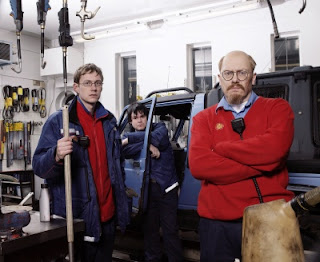 The curious thing?  From my favorite Icelandic show...the Night Shift....there's this one character named "Daniel" (guy on left of picture).  Daniel is this American guy who was hired by the hotel to be a cook....after he failed medical school miserably.  Snowden looks a lot like Daniel.

To be truthful, the TV-show Daniel-character hasn't been much of a success at anything, has various issues, can't handle stress of any type, probably is a four-star pothead, and is easily lead around by others.  Curiously, this sounds like Snowden in real life.

I suspect in a way that most Icelandic people see Snowden as Daniel, and think they are getting a real-life Daniel.

As for how they get Snowden to Iceland from Hong Kong?  Well....this gets to being interesting.  Flying there would almost be impossible.  You'd have to land somewhere and the US would have papers to arrest the guy.

By boat?  A Chinese freighter could pick Snowden up and likely get him to some western Africa nation....where someone with a sailboat could move him the rest of the way.  It'd take a couple of weeks to move him like this.

The US intention to intercept Snowden?  It's a fair possibility.  On the high seas.....he'd be a target.

Could the NSA guys intercept the coded messages and figure out the scheme?  I'm guessing the boys are working overtime to figure out the travel plans.  I'd also take a guess that some US naval presence is being prepared somewhere between China and the African west coast.  This might be interesting to watch.
at Friday, June 21, 2013 No comments:

After you watch the video of President Obama's Berlin speech five or six times.....you come away shaking your head.

First, whoever came up with this idea of the fancy protective Plexiglas (8 inches thick)....never tested it in situations of extreme heat and having it right up against the guy giving the speech.  I'm guessing it's a fantastic heat magnetic, and if you put it out twenty-four hours ahead of time....giving it plenty of time to soak in the heat....it likely radiates heat over to the speech guy.

Temperature around that podium?  It was 92 degrees down around the crowd that day, but on the podium?  Maybe 95-to-96 degrees.  The President was likely begging for a sip of ice water by the conclusion of this speech.

To be used again?  They will finish this trip over to Africa with the Plexiglas unit but I seriously doubt that the President will ever agree to allow them to use that again in the summer time.

Second, for such a major venue......this was a lousy speech.  I would have appointed one person the job six months ago and expected a pretty dynamic speech.  For the German elections in the fall.....a great speech would have fed off to the liberal SPD party, and helped their candidate.  In this case.....the Obama speech was flat, and likely to be forgotten within six months.  No one will say much about it in ten to twenty years.

Finally, you could tell....after the G8 conference....the President is tired.  He's run into various issues and likely needs a week off to recharge and get back into positive shape.
at Friday, June 21, 2013 No comments: