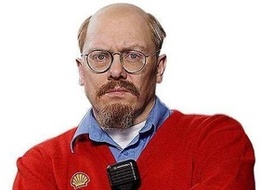 Summer of last year....as I traveled from the US to Germany via Iceland Air....I had a chance to watch "The Night Shift". It's an Icelandic TV series....which they made only a dozen episodes.

It's best to describe George as a full-copy of Lenin, the Communist.  He's a complete slacker.....no ambition beyond being manager and moving up the Communist ladder of power.

He holds degree after degree, but probably has only an ounce or two of common sense.  After watching an episode....you'd consider George to be mostly child-like in nature and having almost no maturity worth mentioning.

Communist propaganda is uttered about every two minutes in the show.....with you eventually convinced that Marx, Stalin and Lenin were all losers on a mission.

George runs this rag-tag band of two merry-men.  Both are losers, so this team goes nowhere.

Had the series been made in the US....it would have lasted six to eight years, and maybe one-hundred-and-fifty episodes.  In Iceland, you are considered a complete success in life....with twelve episodes of a show.

If you should get a chance to watch the show....which only comes in English sub-titles.....watch it.
at Saturday, June 22, 2013 No comments:

The MPS Guy at the Door

This is a story which takes a minute or two to explain.

Out in Australia....the government picked up on this idea back in the 1960s....to collect question and answer data from the public and build a database around it.

So this Monthly Population Survey (MPS) caught on.

In recent months, the questions have gotten down to curious things....like sexual partners and habits.  Aussies....even though they are a bit open on life....don't really care to provide such data to some Census-guy who just appeared at the front door.

There's a curious thing about the survey....you can't really avoid it or just deny it.  They can actually take you into a prosecution situation.  According to the law, once you get into a survey situation....you have to participate once a month for eight months....then they kind of leave you alone.  Other than packing up and moving....that's the only way to avoid this idiot survey guy.

Aussies are now figuring out that personal lifestyle things are an item of government curiosity.  The government would like to know how you do it, and your general feelings on other folks who do it.

I tend to ponder on events like this....if such a survey guy were to ever show up in Bama, and question folks on personal affairs like this.

Most Bama folks would take the opposite view of the Aussies.  We'd likely sit at the porch, and weave up this fantastic tale of trailer-court women, scented candles from Wal-Mart, feelings for the Piggly Wiggly assistant manager, fantasy ideas over garden rendezvous episodes, flea-market enchanted moments, and wicked thoughts that the minister would need to address in the Sunday church meeting.

We'd make up stories about people who drove all the way to Opp to meet some gal from the internet....only to find out that it was a guy....not a gal.  Or we'd tell some ten-minute story over our neighbor who went duck-hunting with a six-foot tall Amazon gal from Dallas who was a amateur wrestler (you can guess how this story ends).

This survey guy would eventually realize that we just wasted his whole afternoon....making up story after story.  And my recommendation for Aussies?  Tell the biggest most unusual stories possible, and don't worry about being truthful.
at Saturday, June 22, 2013 No comments:

I sat through Friday evening....flipping through eight different news channels....even the local news, and the chief topic?  This Paula Deen gal fired by the Food Network....apparently for using the N-word, then offering up some kind of apology for racism.

To be honest, if Paula was to stand in front of me at the grocery store....I wouldn't recognize her.  I've seen one episode of some show with her, and there's not much worth saying.

Why all the news discussion?  I can't say.  It's mostly a one-star story....if you ask me.

How many idiots on the streets of DC utter the N-word on a daily basis?  Probably 3,000.  In St. Louis? Maybe three to four thousand.  Any of them getting fired? No.  Does anyone care?  No.

What happens now?  Paula will sit around for three months contemplating what happened, and then write some book.  It'll get published and everyone will run to Paula for interviews.

We are becoming a society of gimmick-stars.  You do something stupid, you end up on TV.  You do something unusual, you get onto the 10PM news.  A reformed Muslim guy could turn into a rodeo-clown overnight, and probably get six minutes of airtime on The Today Show....with Matt asking what it feels like to jihad your way with a bull.

That's how screwed up things have become.
at Saturday, June 22, 2013 No comments: