I hate having to poke fun at Senators and Congressmen....you'd like to hope on some chance that they don't speak out and say something awful stupid that would get people worried or upset.  This week?  Democratic Representative Debbie Wasserman Schultz....came out to address global warming.

Here emphasis?  She hyped up on nine inches of sea-level rise over the past ninety years.  She's worried. If global warming continues at this rate....her district will likely be underwater.  It might just be a couple of years.  Maybe more.  Maybe less. 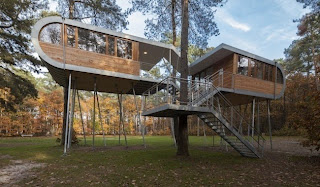 I sat and pondered over this.  If you went out and moved to Florida, and found yourself a fancy property along the beachfront....just six inches above sea-level....you were mostly foolish.  It'd be like building a house eight foot away from the Mississippi River....or sixty foot from a leaning bolder out in California that might heave if you just had the right earthquake.

But a man has to be forgiving of folks in this case.  And I think there's only one thing we can do.....save the poor folks who built on the beach.  So I'm suggesting we require all new homes in Florida to be built twenty-four feet above the ground....on stilts.

It'll be a federal program....we will provide the stilts, as needed (subsidized and covered by a new tax on perfume, Snickers, cat-food, and flip-flops).  Don't ask how I came up with this taxation scheme.

The neat thing about the stilt idea....is that with twenty-four feet...you got some protection.  If the water only rises an inch each sixteen years on average.....we will have at least four hundred years of service with the house before water overcomes it.

Course, this will bring up the topic of representation and how to recognize county lines....if streets are gone.  We have to make sure that Representative Wasserman can still stay in her district, and cover their priorities.

I also have this other idea of building a sixteen foot pipe from the Gulf of Mexico to the Salt Flats of Utah, and fill up the area with a brand new lake....the size of New York City.  This would hide the sea-level rise for another hundred years.

Thankfully, science is a double-edge sword.