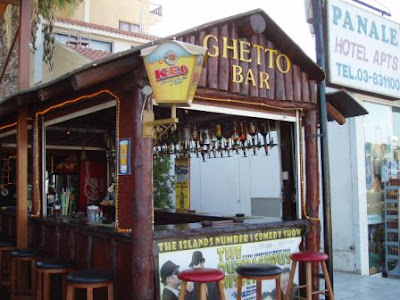 A couple of years ago, I went on a trip to Cyprus....seven days.  It's best not to ask me about trip.  It was one of those that you'd rather forget than remember.

Down from the four-star hotel I stayed at (it was really a three-star)....was this pub on the street....called the Ghetto Bar.

I stood there on the street for a good two minutes gazing at it.  A guy from Bama would ask questions.  The name usually wouldn't help in sales or attract normal Bama folks.  But you ought not stand there for a lengthy period of time.  Eventually, my wife convinced me it was time to move on.....and not stop for a brief moment of refreshment.

So almost daily for seven days....I'd pass the Ghetto Bar, and think for a moment about a glass of something....but common sense would kick in.  Just one of those things that you remember about bad trips.
at Monday, September 02, 2013 No comments:

I spent around six minutes watching Fox New's Chris Wallace throwing questions to Secretary of State John Kerry (the Sunday political chat show).  The best I can say is that I'd had enough after six and ended that viewing.  Kerry looked pretty lousy, and really couldn't react to the questions being tossed.  You could sense he was frustrated by the Syria mess, but there's nothing much he can do.....because just about everything with foreign policy is run out of the White House....not the State Department.  If anything, I'm hoping Chris Wallace doesn't tag John Kerry to come back again until the Syria mess is wrapped up (one way or another).

My general impression is that if the vote comes down to the Congress....there won't be enough votes to support the President's intentions, and the Syrian rebels will be sitting there in a daze, thinking the President would always come to their aid in the very end.  At that point, perhaps by calculation.....they will turn to Turkey and Saudi Arabia.....to scheme up the next phase of the civil war.  Personally, I don't see any end in 2013, or 2014.

I noted from DC local news.....the DC's police-boat.....flipped on the siren and went into some turbo mode around the river.  Making some wide curve.....the operator misjudged the curve, and ran into a couple of boats parked at some private boating dock.  Based on comments at the scene.....at least one boat sunk, and some damage to the others.  Course, the police-boat continues on and never stops.  Events were reported to the cops in DC, but as of this morning.....they have yet to say anything much over what happened and the emergency that the police-boat was reacting to.  About eight feet down....lies some guy's private boat, and I reckon he's fairly upset about the damage.  With DC relations as they are.....he'll have to engage a lawyer and take the whole thing into court to get a real settlement.

I noted in British press coverage....down in Sierra Leone.....there's a British bio-fuel operation underway.  There was a fair amount of land leased to produce sugar-cane, which would go strictly toward British bioi-fuel requirements.  The thing is.....this was pumped up as a big environmental project and lots of green-minded folks were thrilled about this deal when arranged in 2008.  Well....time has passed.  Locals now in the community around this huge farming effort are now complaining that food production has been curtailed, and everyone is suffering to some degree now.  The bio-fuels folks?  Well....they think a EU-investigation committee might be in order.  You can sense...things will be dragged out for three or four years before they all admit that the bio-fuels business did hurt food production in this little African country.  Whoever dreamed up this idea is probably moving on.....looking for another mess to create....somewhere else in the world.

Finally, I noted that climate change enthusiasts are peppy about this new idea that crop pests are moving at much higher rate now.....because of climate change, thus endangering the world's crops.  The fact that vehicles, aircraft, and trains criss-cross various lands today.....had absolutely no effect on the spread of the little pests (my deduction from their report).  Yes, if only the climate would pick one stage and just stay there at that one stage.....then we'd all survive happily.  But sadly, for over 400 million years.....things just keep changing.....meaning constant climate change.
at Monday, September 02, 2013 No comments: